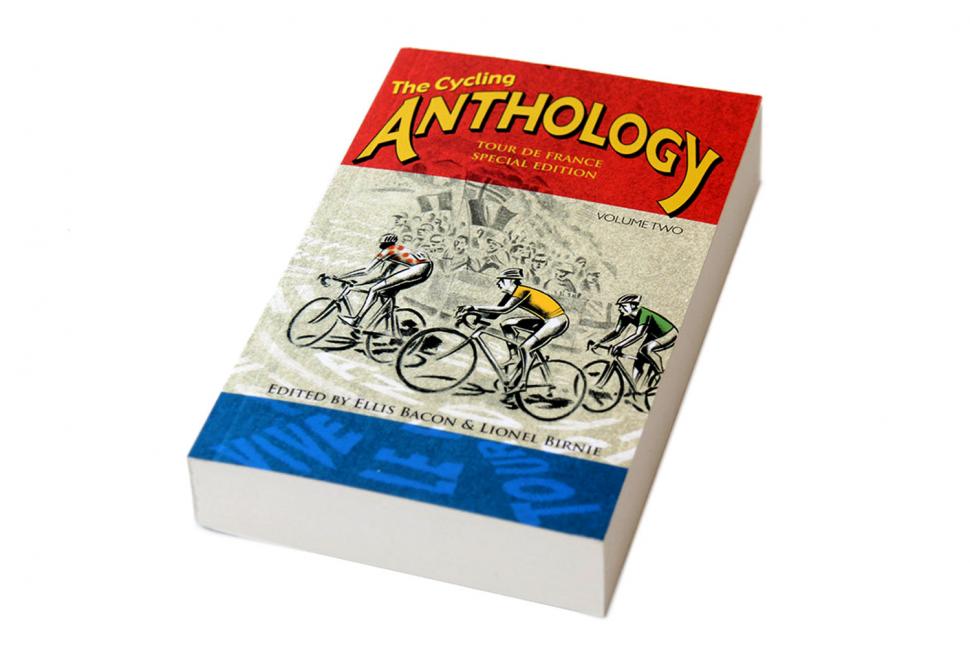 8
10
A worthy follow up to Volume One that delivers some new Tour history from those that were there.
Weight:
500g
Contact:
www.prendas.co.uk and good bookstores
How we test

If you're not Toured out, this excellent collection provides some real insight into the history of the Tour de France, ancient and modern.

With the 100th Tour this year and the warm reception for the Cycling Anthology Volume One, a Tour-related special collection by some of the world’s best cycle writers was inevitable.

There’s a broad mixture of different disciplines at work this time around: The almost inevitable historical piece is on Charley Gaul - the “James Dean’ of pro cycling. Almost more famous for living in Garboesque isolation in a hut in the Ardennes for years as he was a winner of the Tour de France. Wiggins is probably eyeing just such a hut right now...

Lionel Birnie sinks his teeth into the well chewed Festina-Armstrong period in ‘A Guide For The Cynics and the Sceptics’ and manages to say something new and perceptive about the whole sorry mess. Birnie’s observation that when actually covering the Tour first hand as a proper journalist ‘Black and white often blur until you can only see grey’ will not be seen as a valid excuse by the high priests and priestesses of cycle forum invective.

Anthology Two is strong on singular personalities beyond the riders. Sam Abt discusses the Tour director Felix Lévitan who introduced the polka dot jersey but then flew too close to the sun when he tried to take the Tour’s values across the Atlantic for the fiancially disastrous Tour of America.

Will Fotheringham looks at the imperious Cyril Grimaud, the dandyish directeur sportif behind Greg LeMond, Hinault and Fignon.

Ned Boulting celebrates Brian Venner who brought the tour to British screens in 1986. Ned also defends Phil Liggett in his annus horribilis by suggesting that superb commentary should be accepted as separate from a man’s personal friendships. That may be true, but a dignified silence regarding Lance Armstrong on Liggett’s part might have spared him some of the self-righteous trolling he is still being subjected to. Preferring the ‘other channel’ over Liggett and Sherwen is like trying to argue that Little and Large were better comics than Morecambe and Wise.

Jeremy Whittle’s Ça M’est Égal is a beautiful piece of writing. Here he is, remembering his first tour, being allowed to take the wheel by his French chain smoking colleague after lunch:

“While C snoozed, we rolled gently through the bucolic landscape so typical of the Tour, as it meandered through ‘la France profonde’. Hay wains, shuttered mansions, sawdust cafes, trickling fountains, tumble down garages, burnt, putty-coloured fields stretching to the horizon. After a while, the Garde Républicaines outriders became more frequent, the photographers began overtaking us, until finally, shimmering in the heat haze behind us, I spotted the glinting, glittering spokes, then the red Fiat, the race director’s car, and finally the swaying flotilla of roof racks.”

I can’t see the run into Sheffield having quite the same romance. But as I also can’t see the British authorities forcing the Garde Républicaines to don the UK’s ubiquitous hi-vis badge of petty officialdom I feel sure some of the glamour of the Tour on the road will remain the same.

Daniel Lloyd’s ‘A Domestique’s Tale’ shows why he’s wasted in the Alan Shearer role on the Eurosport’s Lads sofa. Lloyd’s fascinating piece on riding the 2010 tour as a Garmin rider begins with the gut wrenching moment, when, feeling a little under the weather, Lloyd receives the call up for the Tour with only a week to go and vacillates - like you and I might when being offered a sportive place with two days to go.

He asks his room mate Jeremy Hunt whether he should accept the place. Hunt, who had declined an invitation in the 1990’s through trepidation, then had to wait 15 years for a second chance is succinct: “Don’t you ever pass up a chance to ride the Tour de France.”

A week later Lloyd’s sitting in an auditorium as part of the team presentation watching the highlights of the previous year’s race and sneaking a look at Wiggin’s impassive face in the audience with the weight of the Tour and Team Sky on his shoulders.

“It felt unreal as we left the auditorium and emerged, blinking, into the light, as if we’d just left the cinema having watched a film that had read us our fortune.”

There’s a little bit of self indulgence in Anthology Two and perhaps a couple of pieces which could have been stronger, shorter or less predictable but that could be a matter of personal taste. Even having read so much about the Tour over the years, there is very little stale or clichéd here.

For readers coming fresh to some of the more well-known moments of Tour history: read assured, you’re in good hands.

A worthy follow up to Volume One that delivers some new Tour history from those that were there.