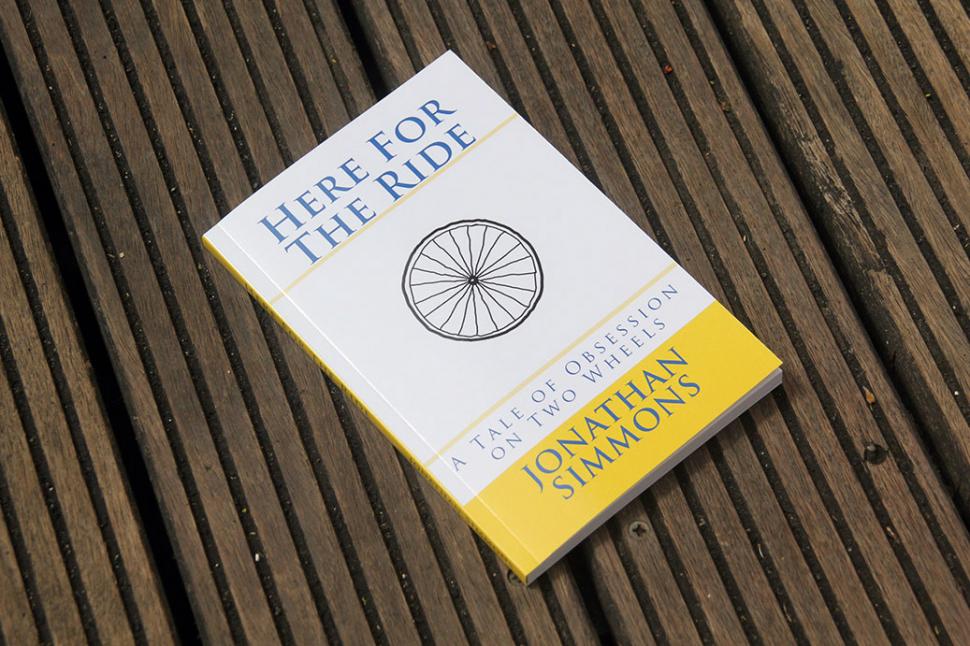 Here For The Ride by Jonathan Simmons

5
10
A tale of a stage of cycling many of us are going through handled pretty well.
Weight:
200g
Contact:
Available from amazon.co.uk and all good book stores

With so many recent British books on middle-aged cycling it's interesting to read a cycle confessional from the USA for a change. Jonathan Simmons is a psychologist based in Massachusetts and his short tale of cycle obsession might make for familiar, rather uncomfortable, reading.

The key stages are all here: The intro ride with cycling mates; bow-leggedly deciding that padded cycle shorts are perhaps a good idea after all; going a bit mad and bonking on your first sportive; buying a better bike; then another; and yet another....

Newbie level complete, Simmons moves into stage 2: winter training rides with the hardest of the hard; leaving the weaker behind without qualm, sniggering at slower riders in gaudy jerseys and then starting to feel that he needs to prove himself further.

Stage 3 brings the 'magic putters' of cycling: the power meter, considering buying wheels 157g lighter than his current wheels - the difference in weight being the weight of 'an average Granny Smith apple' - and the most seductive temptation of all - thinking that he could be a racing contender.

Simmon's summation of trying to successfully slip into middle aged racing is spot on whatever continent you live on:

'The low hanging fruit, the fast kids from high school who went to seed, or the slow kids who stayed slow, weren't racing, they were watching TV, or watching from the bleachers thinking, 'I could do that.' The guys my age who were still racing: they would kick the crap out of me, for now and forever.'

Did I mention Simmons is a psychologist? No matter if not. Simmons does. A lot. His obsession with cycling is related to his relationship with his father, his wife, son, and numerous patients dealing with actual problems - far beyond whether they own the right race wheels. It's a little like Good Will Hunting on a bike.

Being American also carries its own literary weight; the almost obligatory references to Moby Dick and the occasional faux Hemingway gravitas. Here's Simmons in the chapter 'Dust Clouds and Tears' (no really):

'When I was learning to ride a bike, the Vietnam War was heating up and Watts was burning down. I was five years old and I rode alone...'

You can almost hear a weary Morgan Freeman reading the audio version.

Simmons as an adult is a little prone to the kind of 'epic' exaggeration that you hear every week on the Sunday ride if you cycle with a group. For Mr Simmons's future reference, having an intact bike, a little concussion and road rash, but time to both quote Tom Simpson and tell the paramedic that you have a 'resting pulse of 36' does not qualify as 'a very bad crash.'

From personal experience cracked ribs are not classed as a serious accident, with either other riders or even family. Actually breaking a large bone or waking up in hospital with no idea of how you got there is the foothills of 'a very bad crash'.

Some of Simmons' anecdotes are touching but others are too tetchy to illicit much sympathy and blaming your novice rider wife for almost causing a crash when you ride too close to her in the first place might seem a little unfair.

In the end Simmons believes that he's saved himself and stopped acting like 'a jerk'. A combination of fear of serious accident, and an acceptance that when you're on the wrong side of 40, trying to be the racing legend that you never were isn't epic so much as tragic brings him to his senses.

It doesn't quite disguise the conceit that giving up is as noble as racing itself and the suspicion that Simmons still feels that fear rather than age held him back from glory.

Bicycles are the perfect foil for middle aged competative angst and there will always be some about your age half wheeling you on the hill.

As far as organised racing goes Simmons should perhaps have referenced Scott Fitzgerald over Melville. 'So we beat on, boats against the current, bourne back ceaselessly into the past' - or out of the back of the group if you're on a bike not a boat. That pretty much describes racing after 40 for most of us.

A tale of a stage of cycling many of us are going through handled pretty well.

Make and model: Here For The Ride by Jonathan Simmons

Jonathan Simmons
Here For The Ride