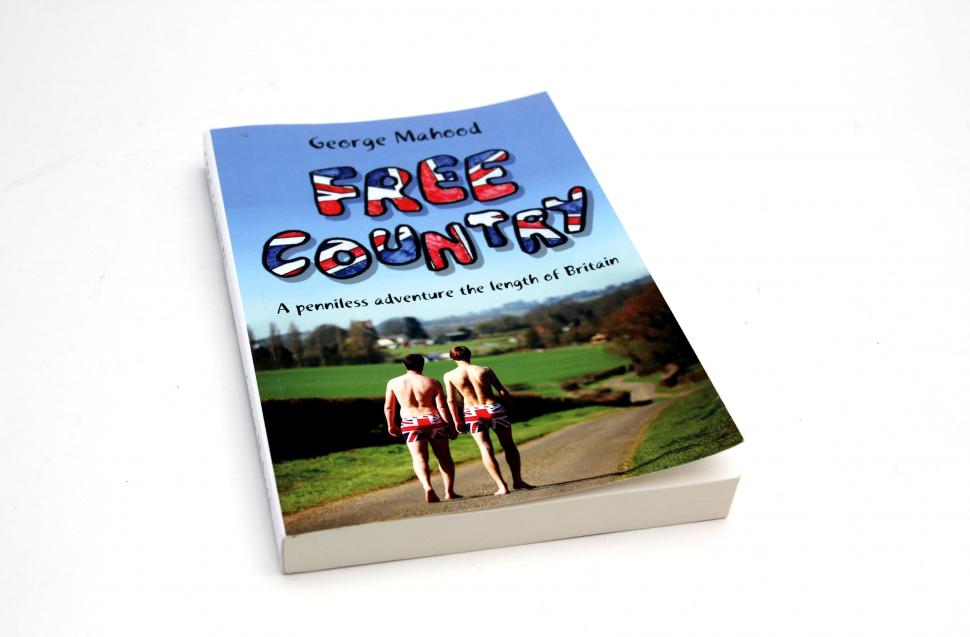 7
10
Entertaining tale of perversity over adversity that warms the cockles
Weight:
425g
Contact:
Available from amazon.co.uk and all good book stores

To be honest this book has very little to do with the love or even understanding of cycling. Bikes feature - but they're pretty basic machines and remain capricious and mysterious in their mechanical functions to our travellers. Free Country is the tale of two friends called Matt and Ben who decide to try to travel the length of Britain by starting out in just their underpants at Lands End and relying on the generosity and kindness of the Great British Public (GBP) to clothe, feed and supply them with bikes to help them get to John 'O' Groats within three weeks.

Initially I was going to consign this book to the bin. The world's over run with attention seeking idiots doing 'wacky' things they don't need to for charity or just 'because it's there': Old men walking across Antarctica; fat DJs climbing Kilamoylegiro; company directors frozen solid up every footpath to Everest. They're the kind of people who aren't doing it to 'discover themselves' but simply so that they can bore the backside off you down the pub with their pointless exploits when they get back.

But I was curious. What works with Free Country straight away is that George and Ben seem decent enough and George writes with just the right Bill Brysonesque balance between self depreciation and cynical observation. The trip very quickly settles into a mini road movie that thankfully seems more Morecambe and Wise then Crosby and Hope.

It also tells you as much about the GBP as it does them and it's pretty positive on both counts. Starting in Lands End our travellers soon acquire a t shirt each to garb their upper halves and with a pair of shoes between them they are on the road. 'We soon established that walking along the thick white line on the edge of the road minimised the discomfort'.

Asking for free food in exchange for odd jobs works every time and the duo soon have a child's BMX and a child's scooter to help them conquer the hills of North Devon.'We had made it our aim to avoid A roads as much as possible. They are no fun to cycle along and you don't get to see the country in the same way that you do via the back roads.'

How right George is. This is a proper challenge - no goody bags, whipping along the shortest route in a peleton and carbon fibre bikes for them. They eventually secure a mountain bike and an ancient child's road bike which persists in flinging its chain but George refuses to give it up and rides its - knees around ears - all the way to the finish.

It's a curiously uplifting read. Pretty much every where George and Ben end up, people happily listen to their explanation and then shower them with freebies: rooms, bikes, clothes, free booze - even a chinese meal. Of course, to be cynical, it does George and Ben no harm at all to be slightly posh, nice looking, a little bit helpless and white - but it's all rather uplifting to find out that caring for strangers and expecting nothing in return is still something that most British people seem to enjoy doing.

It doesn't. But I wouldn't ask for any freebies as George and Ben may have wrung that particular well dry.

It's more about the journey than the transport but you have to admire the perversity of tackling part of LEJOG on a scooter and a kid's BMX. In a world of boast-fests and tales of epic trips tackled with the latest in technology Free Country has to be the most unusual and uplifting take on riding Lejog I've read.

Entertaining tale of perversity over adversity that warms the cockles.