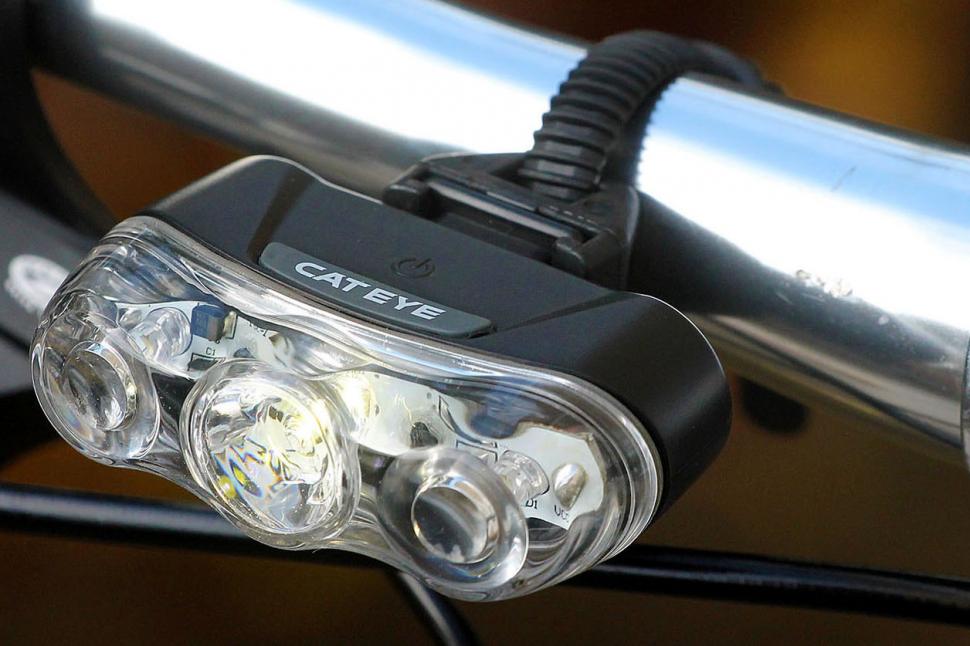 8
10
Extremely capable urban commuter light/dynamo companion or main light back up with excellent output and economy all at a reasonable price
Weight:
25g
Contact:
www.zyro.co.uk
How we test

It's the purity of delivery that separates Cateye's Rapid 3 front light from a wealth of similar blinkeys. I don't like watts as a measure since it's concerned with consumption, rather than output. However, ours has saved my blushes (possibly my life too) when a high power main system packed up ten miles from the nearest stretch of street lighting, let alone my front door.

Sharing identical guts with its rear sibling, there's a central 0.2watt spot flanked by two 5mm LEDs powered by two ubiquitous AAA cells, which in my book makes these a better choice for tourists and indeed mountain bikers. Now for those of you uninitiated with the brands' opti cube technology, it's where lens and reflectors are matched to optimise output according to the light's intended purpose, which seems a genuinely effective.

Talking of which, I've come to appreciate Cateye's simple mounting system that resembles a super-refined zip tie snaking anaconda-like around the full set of handlebar diameters, extension brackets and even some stems too (photo). Another interesting feature is the sculpted anti glare strip that fits shroud like between lens and casing, overcoming the problem of being dazzled by your own light but without muting peripheral potency. Essentially it's a strip of electrical tape, so a neat trick you could use with similarly powerful designs.

Powering up unleashes a retina tickling pool of white light with a faintly blue aura that's just enough for navigating the suburbs to around 14mph in steady but economy drops to around 5hrs 43 minutes (against a quoted six, depending upon cell quality) whereas flashing has returned at least 78.25 with bargain basement batteries. Rapid also works very well because it oscillates faster than most other neon pollution and identifies you as a cyclist to other road users to at least 250 metres, nearer 400 in the sticks with a return of 33.5 hours (35 quoted).

Possibly the most noticeable front LED on the market. The front version of the massively popular Rapid 3 uses

the same high power centre led as the rear version, backed up by 2 x 5mm Led's to fire a pulse of bright light

up front, making sure you get noticed!

Simple serrated loop affair and all the better for it.

Cat eye rapid 3 is an extremely bright and well conceived front light, keenly priced and with great power to economy ratios. That said, the otherwise positive switch can prove a little tricky in gloved hands but prevents unwanted engagement when holidaying in panniers, pockets and similar luggage.

Nothing, although operating the switch proved tricky in gloved hands.