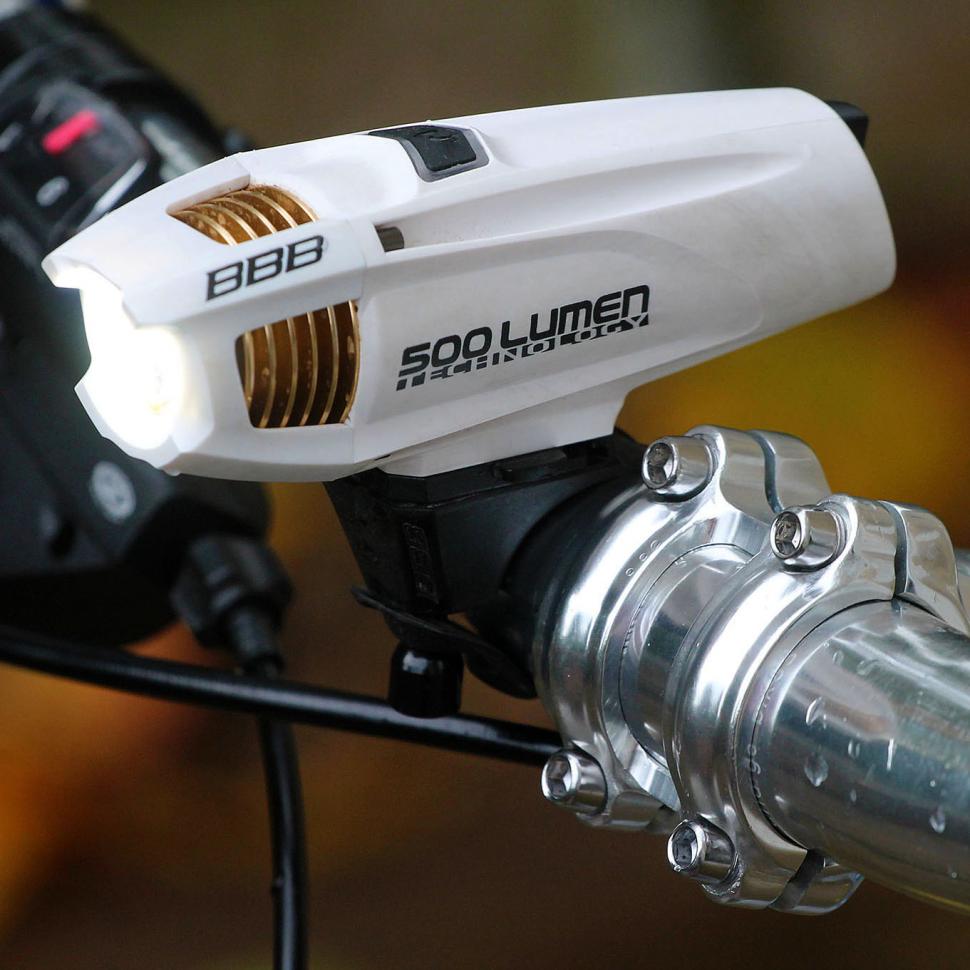 7
10
A good premium light for commuting and dark roads, but should have replaceable batteries
Weight:
107g
Contact:
www.windwave.co.uk
How we test

The BBB Strike 500 front light is a torch type headlight; with 500 lumens it enables you to see as well as be seen. How does it compare to others of similar rating?

The name and looks of our white test unit make me think of a Star Wars Storm Trooper, perhaps a plus for sci-fi fans!? The plastic bodied approach is different to most other manufacturers of these high power LED units such as the Lezyne Super Drive, which I am currently reviewing too. It may make for a less premium feel for some, for what is a £100 item. Still, it is a solid build, with a feature aluminium finned heatsink up front.

Mounting the plastic clamp to my bars was a nice and simple affair. It's a multi-size design, with two bolt holes to fit either 25.4mm or 31.8mm bars (like a belt). No juggling of rubber grips is involved and it held the light plenty tight enough. Angle adjustment of the light on the bars can be made, which is a nice feature, and one often overlooked.

The light is removed from the clamp using slide and pop lock arrangement. The tab is small and I often struggled to get it to release. Once off, you'll probably be heading for the charger: like many lights these days, it charges via USB, Mini-A to be exact - similar to many smartphones. There's no mains adaptor so you're going to have to use one I'm sure you'll have lying around - or a computer. I think USB charging is great for this reason, and it cuts down on cost and the environmental impact of another charger entering this world.

Charging from empty takes around 4 hours in mine, and the manual's experience. You'll know once the blue LED around the power button remains constant rather than flashing. The light is a one button affair, with five modes: four intensity settings and one flashing. Burn time runs from 1.7 - 2.3 - 4 - 8 - 4.5hrs through the modes. I found this to be fairly true and for city commuting, I'd say you can get away with the lowest brightness and longest burn time - allowing a few days between charges. The beauty of lights like this is you can go low power in the city - to be seen, then bump it up once you're on less illuminated roads - to see.

When at 50% battery, the light will change to red, meaning you've got plenty of warning before being caught out. The battery is a removable 18650 Li-ion, just like the one in the Lezyne. Unlike the Lezyne however, it is contained in an unserviceable plastic cell, meaning you're going to have to get onto BBB for a spare, rather than a basic battery supplier. It's a shame as otherwise you could get some spares for your saddle bag.

I like the BBB Strike 500, it's a solid torch type bike light with a more unusual design than the black aluminium conformity. Performance is very similar to the Lezyne that I was also testing at the same price point, both charging by USB, Li-ion batteries, multiple modes, form factor, and very little to tell them apart in the tunnel test. The Lezyne does a better job at spreading its beam, meaning so you should see more of the carriageway and it should get you more noticed - however all things being equal our figures suggest the BBB will punch its narrower beam a bit further down the road - and it has the better bracket, so it's a close call. That swappable battery on the Lezyne though means it just edges it for me in a closely run race.

A good premium light for commuting and dark roads, but should have replaceable batteries.

Couldn't find any blurb on the BBB site or the box but this is a torch type bike light, which falls more on the side of seeing than being seen.

Quick and easy to charge by USB.

Charging time is typically 4 hours. The system is protected against short circuits, overcharging and total discharge.

The plastic construction isn't quite as classy as its competitors but for some this could be a breath of fresh air.

A one button affair with four modes, not much to go wrong or read up on.

A single loop with belt rungs for either 25.8mm or 31.4mm is better than the two mounts that some lights go for. It was easy to install and angle adjustment worked well.

Got caught in the wet and no problems - other than me getting wet!

Larger capacity than the Lezyne means slightly longer running times. I found them to be true to those stated.

More of a spot with a blue hue than I would like but it's still a solid 500 lumen torch with reasonable spread.

Although it's a plastic construction, it is thick and feels solid. The battery is swappable but contained in a plastic body, so you'll have to go through BBB once it starts to drop off.

Better than average due to the material choice.

It's a good light but the same price a the Lezyne Super Drive XL - a light that feels much more of a quality item than this and can swap off the shelf batteries.

Battery is a standard 18650 but contained in a un-openable container.

A sound light but I think there are nicer ones at this price point.