Crud Products used to be better-known in the off-road world, but in the last few years their Roadracer guards have become wildly popular on road bikes too. They're designed for road bikes that won't take conventional mudguards, either because of tight clearances between frame and wheel, or because there are no mudguard eyes on the frame - and usually both.

Call me old-fashioned, but I just don’t understand how anyone can ride a bike without mudguards through the British winter. With no mudguards, you get your legs and backside covered in grime, you liberally spray anyone riding behind, and you leave dirty patches on the seats in cafes that later put up ‘no cyclists’ signs. 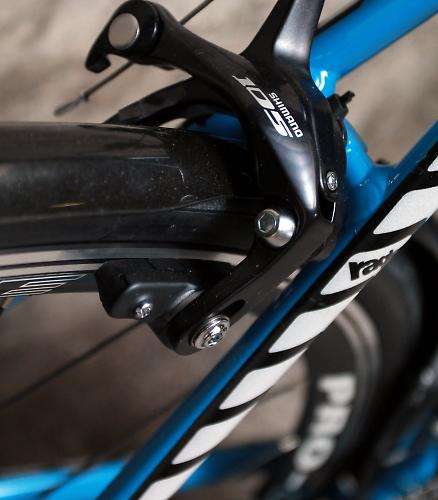 Until recently, one of the arguments against mudguards was ‘they don’t fit on my racing bike’. Another was ‘mudguards spoil the looks of my bike’ (to which a response might be: that’ll be the bike covered in shite then.) But thanks to Crud Roadracers neither of these arguments stand up any more.

As long as you’ve got 4mm between the top of your tyre and the inside of your brake calliper, the Roadracers will slide in. And you don’t need mudguard eyes: Roadracers attach to the frame with re-usable cable ties and some natty little brackets held on with rubber bands.

Yes indeed. That’s all you need to fix the Roadracers because they’re incredibly light, around 150 to 205g the pair, depending on your choice of ‘tips and tails’. More on that later. The weight is saved because Roadracers don’t have the four stiff metal stays used on conventional mudguards to keep the guards from touching the wheel or tyre. Instead, the Roadracers have just two flexible plastic stays and are designed to ‘float’ above the tyre, with some little strips of soft brushing on the inside of the stay-clip to rub very gently on the rims and keep the guards central. 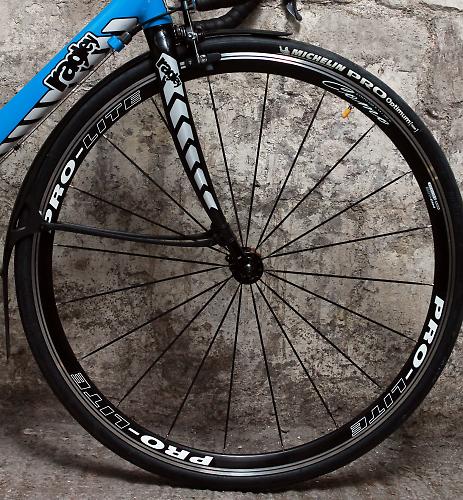 Once you’ve got your head round this concept, it’s a revelation. Yes, the brushes do touch your rims, but the friction is absolutely minimal (Crud say it’s too small to be measured), and with the bike in a stand in the road.cc test lab, the wheels spun in the frame with Roadracers attached just as freely as without.

The original Roadracers were launched a couple of years ago, and the Mk2s feature several improvements: they’re slightly stronger, and you get a wider choice of ‘tips’ and ‘tails’ to attach to each end of the main section of mudguard.

Options include a long or short tip for the front guard; you decide how far you want it to project beyond the front brake. At the rear you can fix a short or long tail; the latter as good as a full-length mud-flap on conventional guards.

Between the back wheel and the seat tube you can fit another long section, sculpted into a deep concave shape at the end to protect your chainwheels and front mech. On one of our our test bikes we couldn’t use this because of the cable line to the front mech, but it’s well worth taking the time to install it if you can because it really does help keep your front mech and chainrings cleaner.

If you want a really minimal look you don’t *have* to fit the tips and tails at all (and on frames with very tight clearance, you can’t), but we think they make a neater job of it.

Out in the puddles

Ok, so they look good, but do they work? Yes. for our first go-round with Roadracers we fitted them to a test bike that scooted around the wet and muddy Cotswold lanes on a February weekend on a 100km audax. Without doubt they were as good as conventional mudguards in keeping the rider (and those behind) as clean and dry as a set of conventional guards.

It has to be said, because of the close clearance, when ridden on really muddy roads, there’s a bit of scraping between the Roadracers and the tyre - until the mud falls off - so in that respect they’re more spray-guards than mud-guards, but so much better than nothing at all.

Since that ride, a couple of years ago now, various members of the road.cc crew have clocked up thousands of winter miles on Roadracer-equipped bikes. One of us keeps a set on a bike year-round and only rides without them if the forecast is for clear skies for the next couple of days. 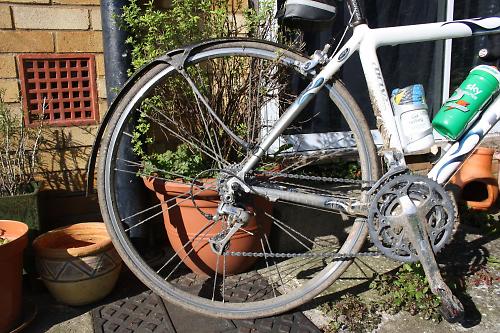 I’ve been a fan of Crud stuff since the 1990s, and have used various versions on mountain bikes over the years - including an early version of a rear Crudguard (with two upright aluminium stays and flexible rubber mountings) that still occasionally sees the light of day on a heavy old hardtail. The Roadracers continue this legacy.

Fixing the Roadracers can be a bit fiddly first time out, but straightforward if you read the instructions - and no worse than fitting a conventional set of mudguards. No tools are required; you just use little plastic nuts and bolts that need finger-tightening only. Here in the road.cc lab we fitted our test set of Roadracers on a bike in well under an hour. For more help, the Crud website features some handy advice on fixing and adjusting Roadracers, and includes a great ‘tips & tricks’ video.

They’re fairly easy to knock out of alignment, but if you do hear them rubbing as you ride along, it can usually be fixed by just pulling the frame attachment round the stay.

Some folks have complained that Roadracers are a bit fragile, and there’s no denying they need gentler handling than chromoplastic guards with metal stays. They are intended to break if something gets stuck in your wheel, which means it’s not hard to break them by accident, for example by absent-mindedly popping your bike up on its rear wheel to wheel it through a gap. So don’t do that.

Crud Roadracers cost £29.99 in bike shops, and you can find them for a few quid less on the major on-line stores. That’s a similar price, or only a bit more, than a good set of conventional mudguards, and well worth the money for keeping diesel-and-manure-flavoured road-spray off your racing bike, off your cycling clothes, and off your poor old club-mates trying to sit on your wheel.

Excellent, easy-fit and good-value option for road bikes with tight clearance. Fit a pair of these, and you'll keep the worse of the muck off all winter long.

The Crud website says 'Traditional mudguard construction dictates a sturdy design, with bolted fixing at the brake bridges... This principle has remained unchanged for a century or more. The Crud Roadracer turns orthodox mudguard design on its head...'

And once you've got your own head round this concept, it's a revelation.

I usually ride: an old Marin Alp   My best bike is: an old Giant Cadex

I regularly do the following types of riding: touring, club rides, sportives, mtb, 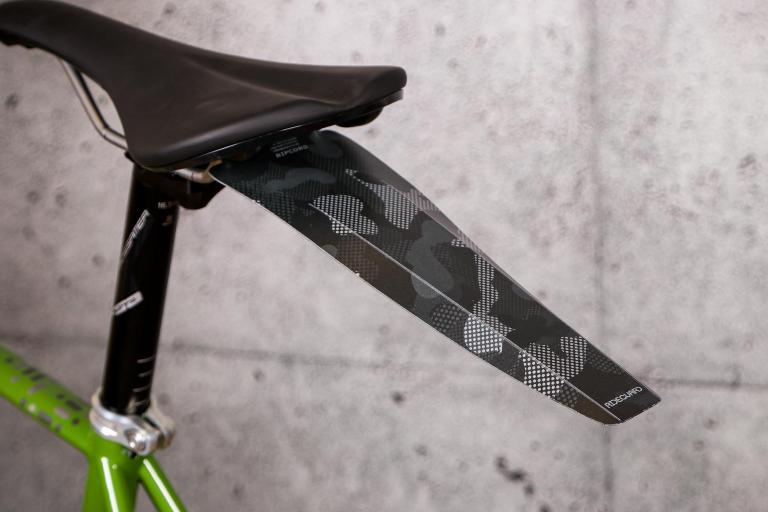 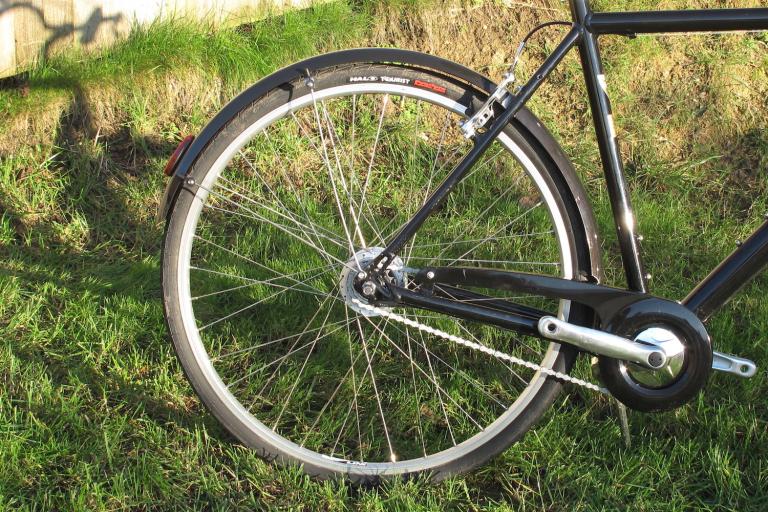 Tough, high-quality and offer great protection, with a five-year guarantee and widely available spares adding to the package 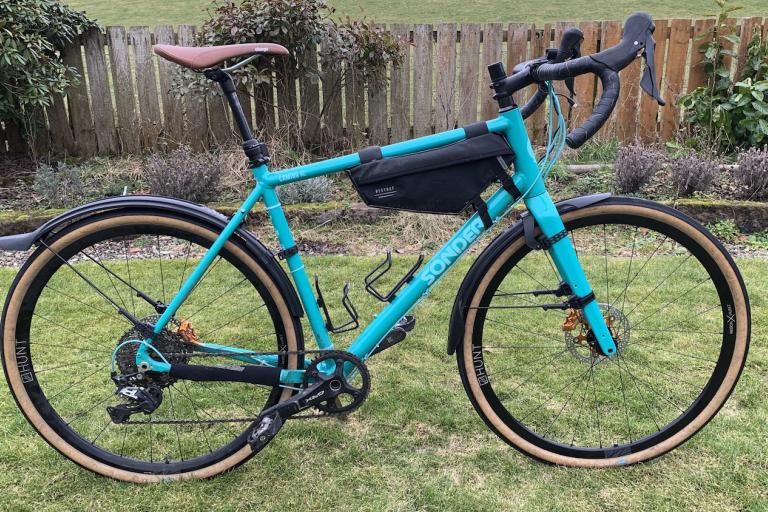 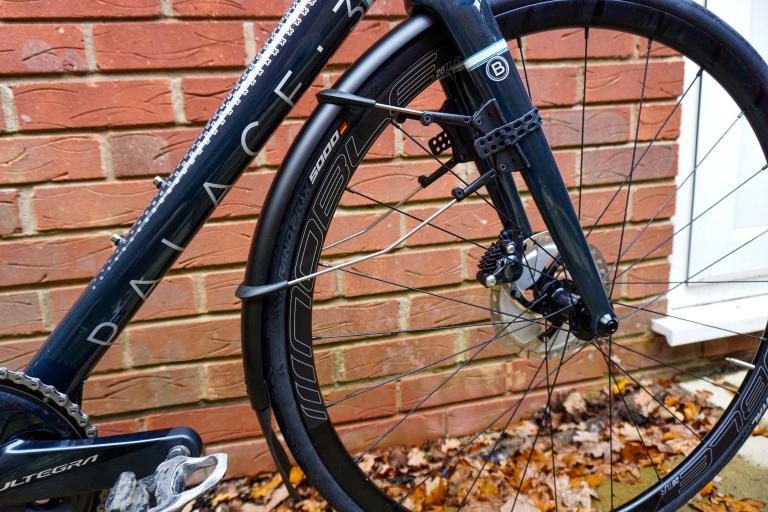 Excellent, easy-to-use guards for solo riding, but not enough coverage for club runs