9
10
Quirky long jacket that beats the weather and has some fun tricks – if you'll pardon the expression – under its skirt
Smart full length looks
Quirky yet practical
Removable skirt/stuff sack bumbag is ingenious
Breathability isn't the best
Shortened jacket is a bit too short
Weight:
471g
Contact:
www.chromeindustries.com
How we test

Chrome's Kojak Convertible jacket is, to put it mildly, a pretty unusual bit of kit. Accept its quirks, though, and you'll find an outer that's waterproof, well appointed, and full of surprises.

I recently tested Chrome's Signal Storm jacket and was left a little dumbfounded by its soft-but-soakable outer surface and rubbery-but-waterproof inner. Proving that Chrome doesn't like following accepted norms, this Kojak Convertible jacket certainly has more than its own share of quirks, too.

Thankfully, at least it follows the tried and tested route of having a proper water-repelling outer surface. Rain instantly and faultlessly beads on the Kojak and – even in the worst weather – nothing gets through its taped-seamed interior. It also helps that it looks rather smart and up to the task, not unlike a cycling orientated Dryza-Bone-style coat. Helping with aesthetics and weatherproofing is the sheer coverage the Kojak provides (rather ironic considering the lollipop-loving detective was famously short in the coverage department himself). With an all-round length that stretches down to just above the knee, great arm length and a capacious hood that will happily swallow a be-helmeted bonce, there's no chance at least 60% of your body is going to get rain sodden. There's also little chance of your body getting chilled by the wind. I've used the Kojak on some truly awful days recently and never felt any breeze make it through. It's not insulated, though, so you'll need other garments to maintain warmth, but the Kojak at least won't let windchill sap your strength.

Mercifully, the interior – although not fleecy soft – is at least not rubberised and feels fine in use, especially over other layers. While this isn't the most breathable of jackets, the inner surface certainly does nothing to exacerbate any self-produced moisture. After a hard ride it gets a little damp but no more and, in fairness, this isn't a coat designed for hard riding. A spirited commute or pootle round town through autumn, winter and spring is well within its capabilities.

I mentioned the Kojak has a few idiosyncrasies and that long design is part of one of them. You see, it's not a single jacket that stretches to your knees – it's actually a short 'trucker' jacket with a zipped-in lower extended section – hence the name 'Convertible'. Should the mood take you, you can unzip the bottom section and just have a shorter top. 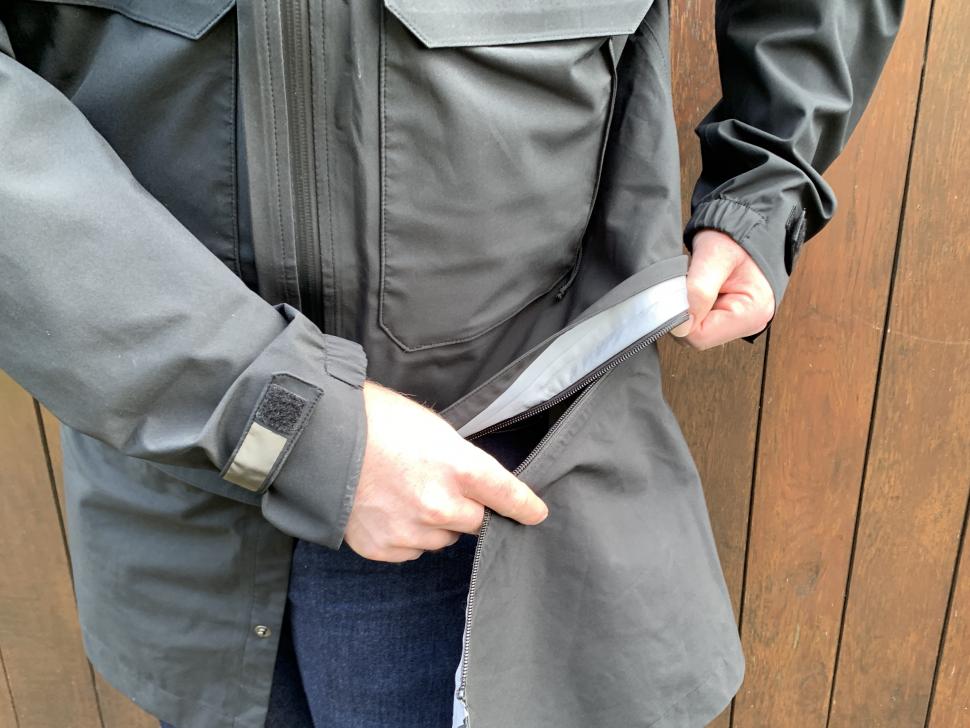 In these gender fluid times, the fact that the entire coat can look a little bit like you're wearing a short black skirt under a black blouson is neither here nor there. In fact, I think that's a preferable option to going for the trucker version, which really is short and sits not unlike an over-stretched crop top. My lower belly may be one of my most prominent features but it's not necessarily the one I want on display. 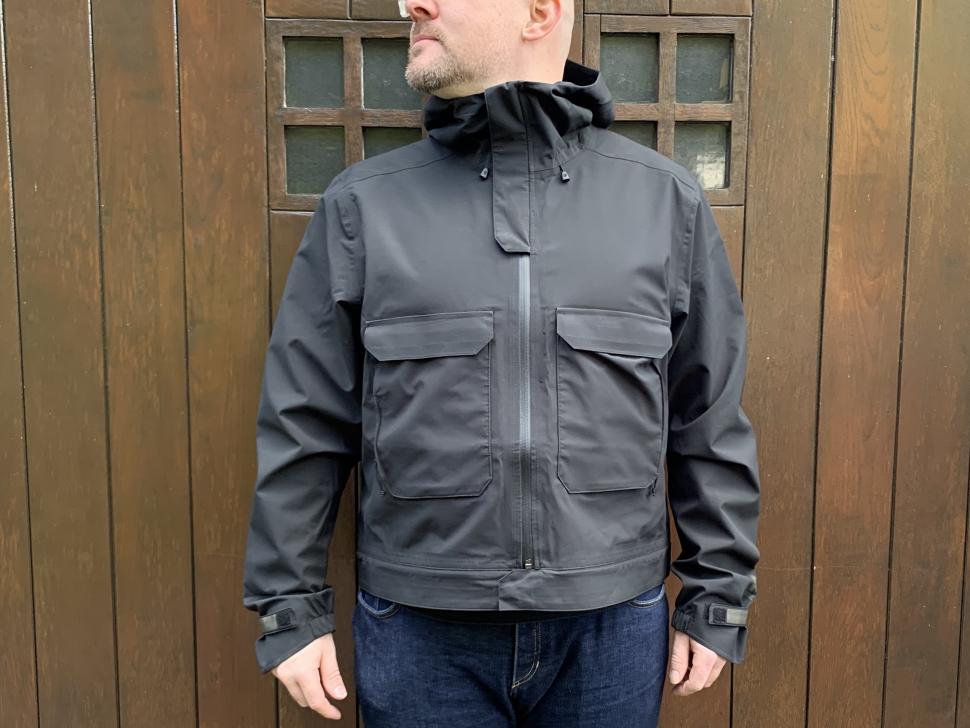 The weirdness doesn't end there. While the front doesn't have a storm flap as such, it does have an over-extended zip garage at the top that stretches a good six inches down from the collar… 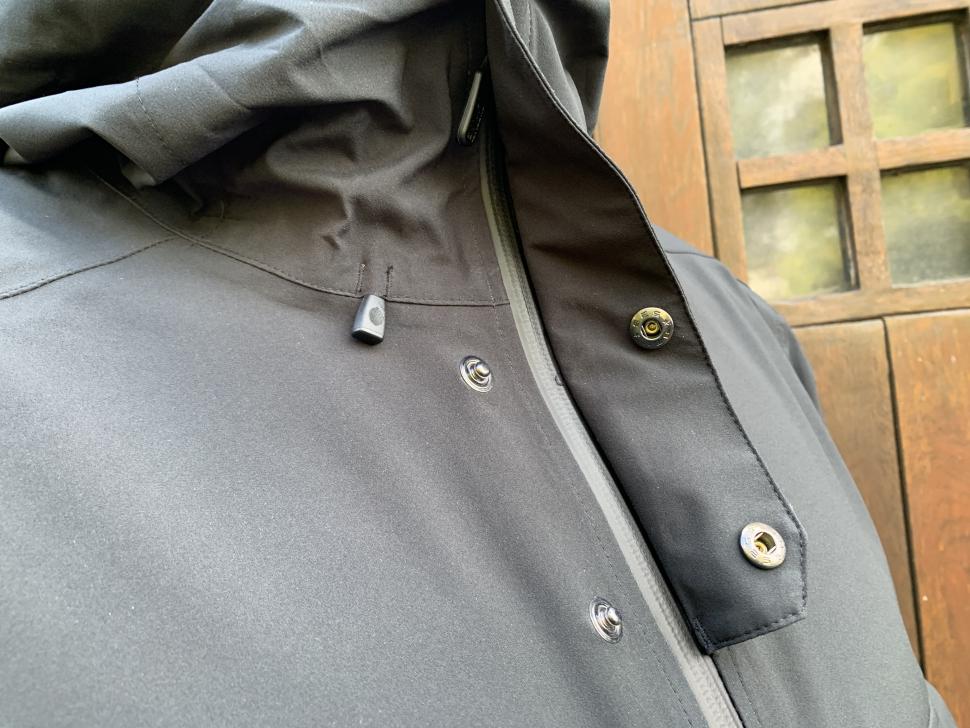 Also, that zip only does up the top jacket, the bottom skirt has to be closed using poppers. 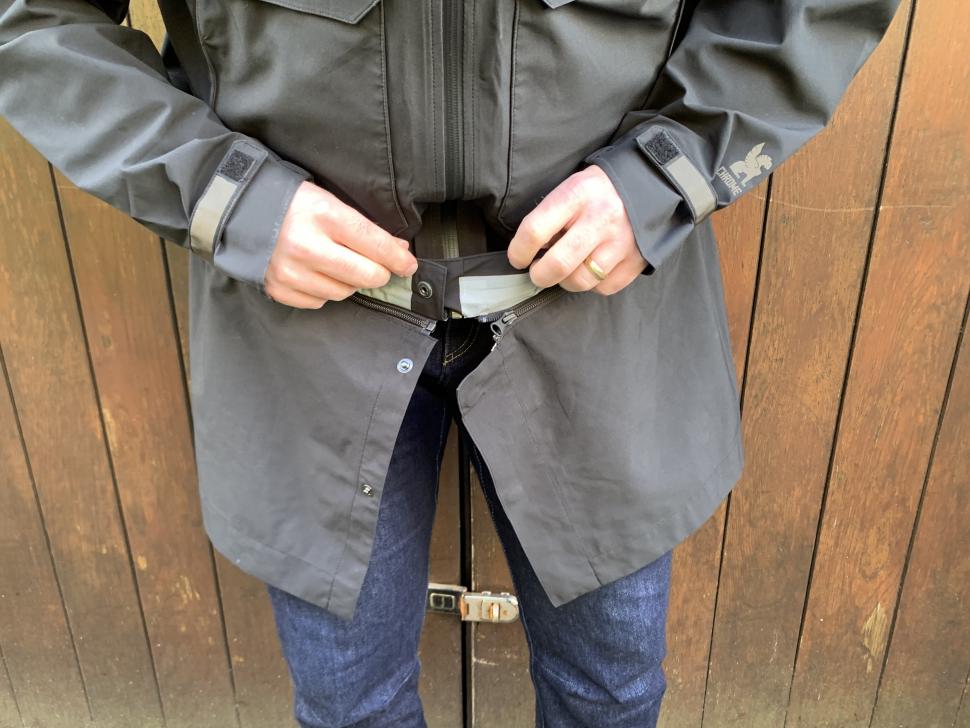 More traditionally, there are two huge chest pockets that both have Velcro top flap openings and zipped side openings for separate compartments. 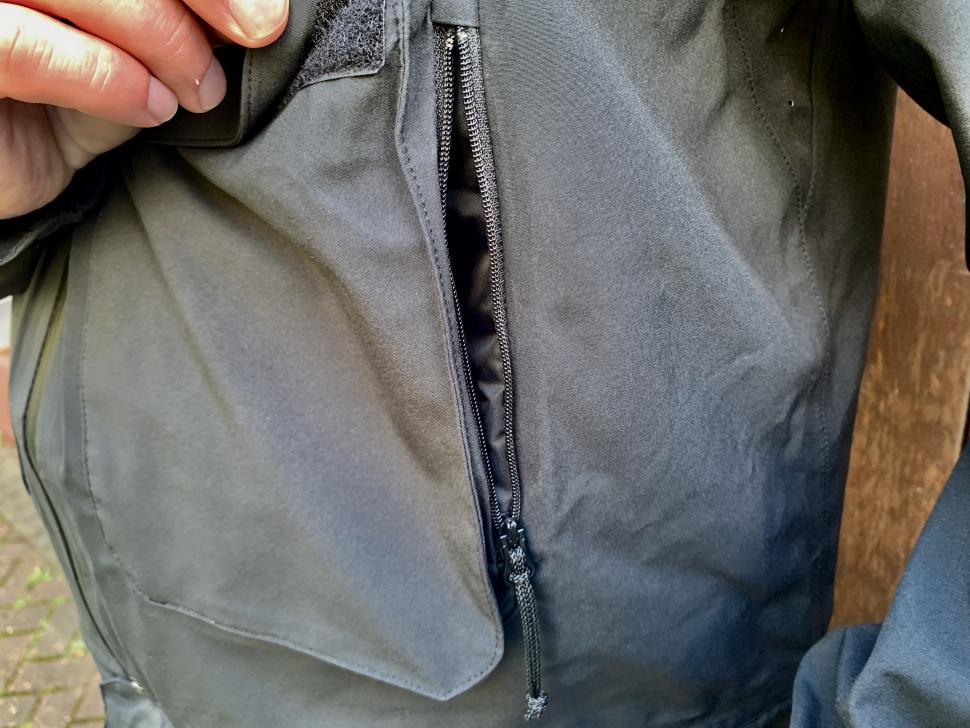 As with the Storm, Chrome's fab reversible reflective wrist straps keep lower arms cosy and visible, and there's also a line of reflective beading across the rear shoulders. 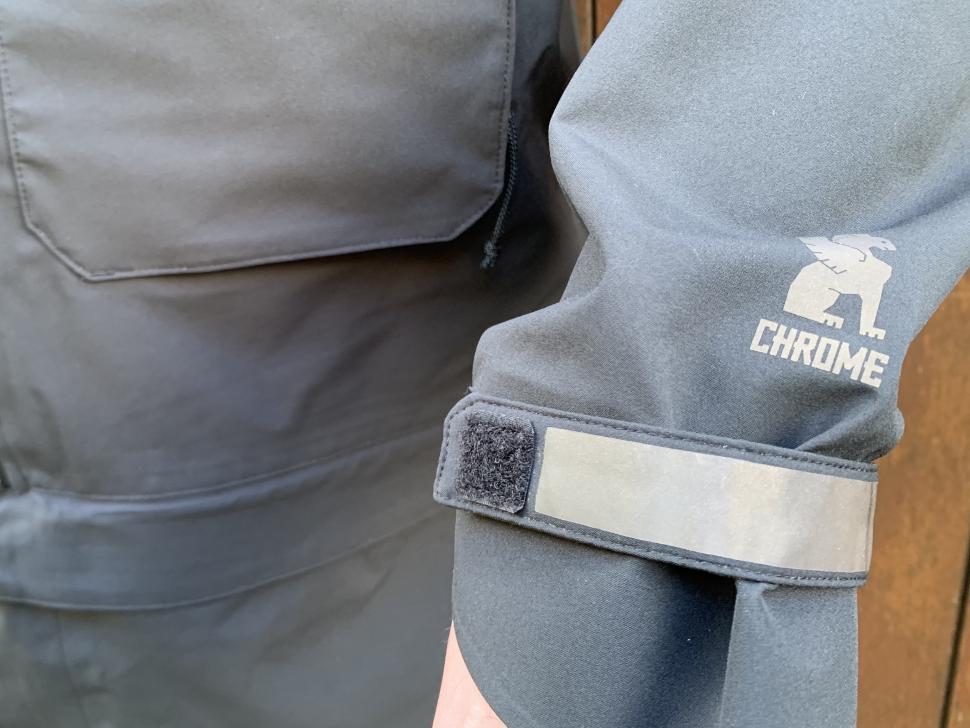 However, there's one more quirky-cum-practical party trick up the Kojak's sleeve. The lower removable skirt has a huge rear zipped pocket but, when you open it, you'll also find there's a quick release strap and some Chrome branding inside. Turn this 'pocket' inside out, and you'll find you've got one of the best self-contained stuff sacks – with a bumbag-style belt – that I've ever seen for a waterproof jacket. 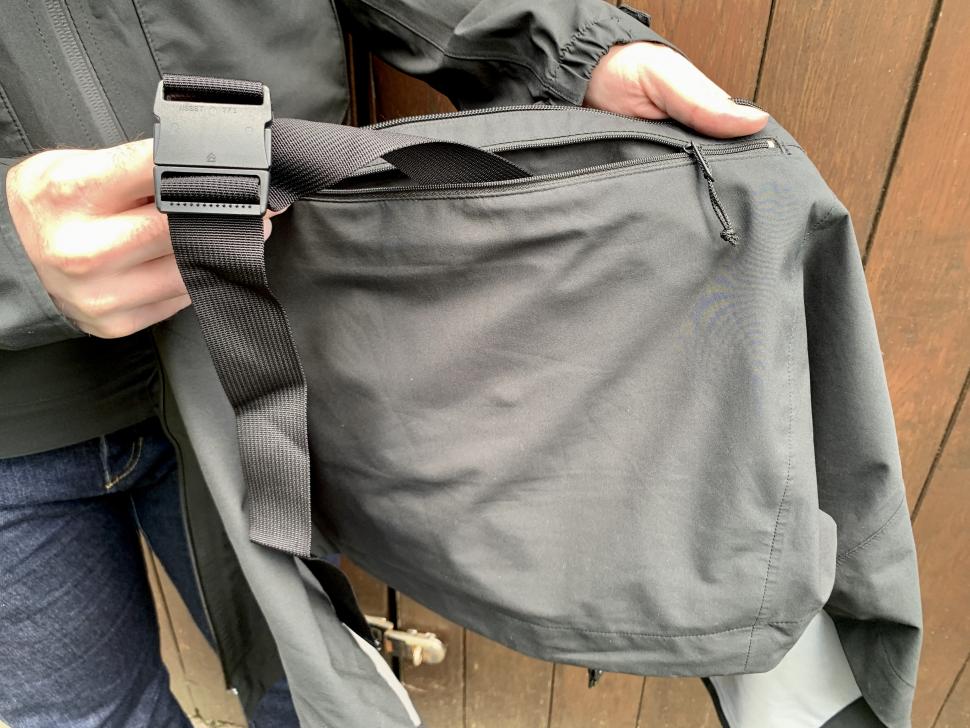 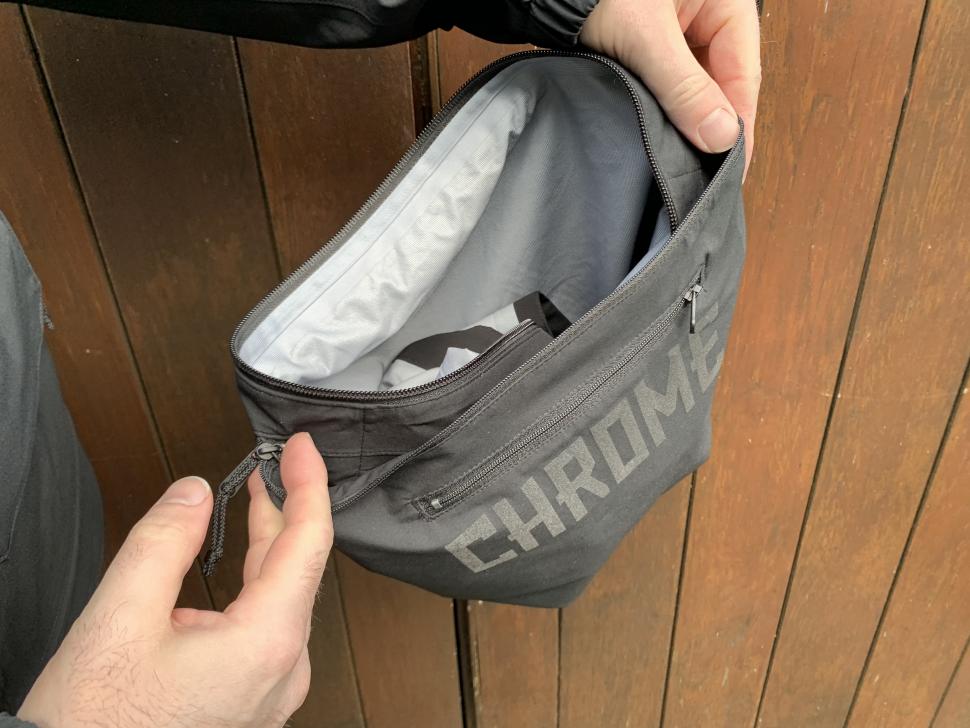 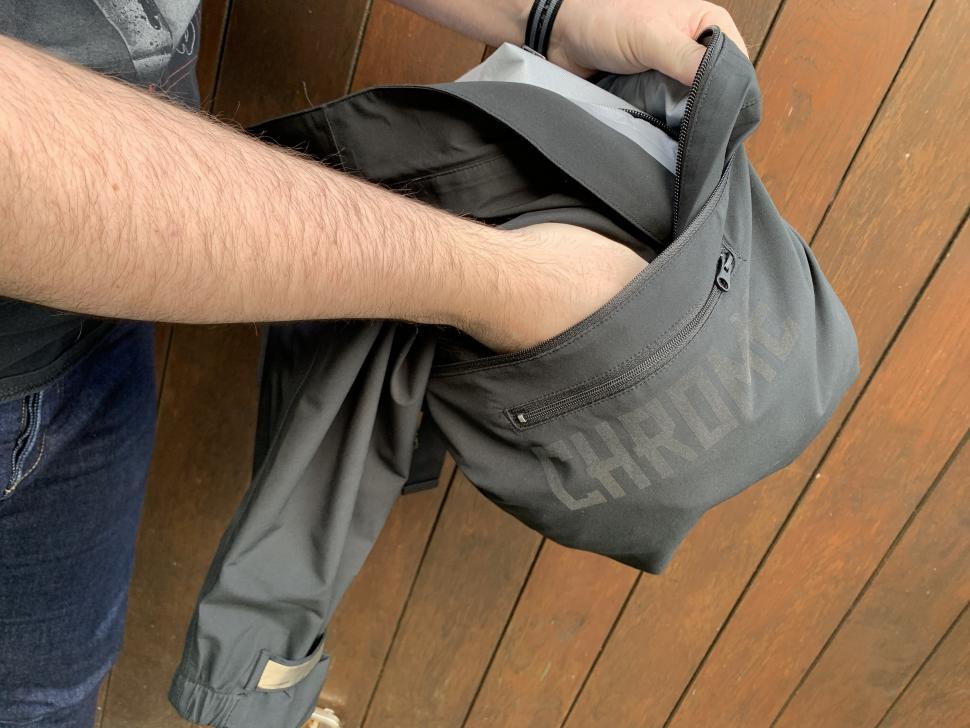 There is an ever-growing range of excellent urban and commuting jackets available. Obviously, there's the Kojak's sibling, Chrome's Signal Storm, which looks even more classy and costs £140, but I think it is inferior to the Kojak when the heavens open. Probably my favourite and best-performing other weatherproof jacket is Howies' Herald Waterproof at £139, which is almost faultless but – it has to be said – has nowhere near the style or funky eccentricity of the Chrome.

I know I've had a bit of a chuckle at the Kojak's expense, but I really rather liked the coat – and yes, it's far better seen as a long coat than a short jacket. There are certainly no qualms about its weather-resistant performance and only a slight lack of breathability lets it down on the technical front. However, the little skirt/stuffsack transformer bumbag really elevates the Kojak into something approaching design genius.

If you're looking for a smart, weatherproof and quirky riding coat for about town, that's loaded with practicalities and some unique features, the Kojak really has to be worth a (lolli) pop. Who loves ya, baby?

It's a long, weatherproof cycling jacket that converts into a shorter jacket and a stuff sack bumbag.

Chrome says: "Transformable full coverage rain jacket that converts to a trucker style jacket with one zip. Bottom half carries in a built in pouch. Made from fully taped waterproof stretch-poly, the Kojak Convertible Jacket is ready to be as adaptable as you are."

Reflective cuffs and back piping

Rate the jacket for quality of construction:
9/10

Really well made with a lot of features.

Excellent wind and waterproofing. Could be just a tad more breathable.

Rate the jacket for durability:
7/10

I'm slightly concerned with all the poppers involved that something will pull away, but all good so far.

Rate the jacket for waterproofing based on the manufacturer's rating:
10/10

Really good – nothing got through.

Rate the jacket for breathability based on the manufacturer's rating:
6/10

It's not terrible, but in anything above mild conditions you're going to experience condensation.

Considering how much material, zips and poppers there are, weight was surprisingly good.

In terms of pure stats and performance, it's quite pricey. But it's unique, classy and performs well, which ups the value... I'd say it's worth the money.

I was ready to find the Kojak was style over substance, but I was wrong. In foul weather, it works really well.

I love the transformable skirt / bumbag.

Styling looks a bit weird, especially as a short jacket.

The Kojak's sibling, Chrome's Signal Storm, looks even more classy and costs £140, but I think is inferior to the Kojak when the heavens open. Probably my favourite and best-performing other weatherproof jacket is Howies' Herald Waterproof at £139, which is almost faultless but – it has to be said – has nowhere near the style or funky eccentricity of the Chrome.

Did you enjoy using the jacket? Yes

Would you consider buying the jacket? No

The Kojak Convertible is such a strange jacket in many ways, it's hard to know what value and score to give it. Also, many of its quirks might delight some people while infuriating others. However, even in purely practical terms, if does what it sets out to do really well and protects the rider from the weather. Only the less-than-perfect breathability and the high price go against it. Decent option for casual rides, commuting or wearing off the bike, though the waterproofing could be better 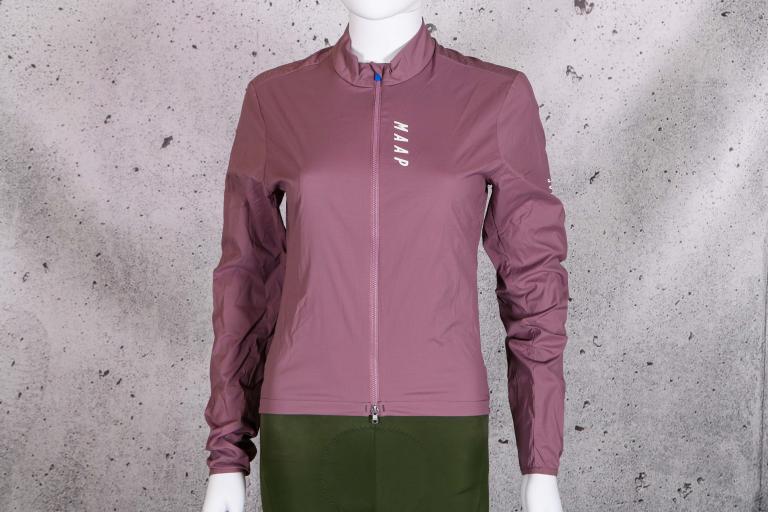 Well-made, packable, lightweight barrier against chilly winds, but don't expect it to stand up to any rain 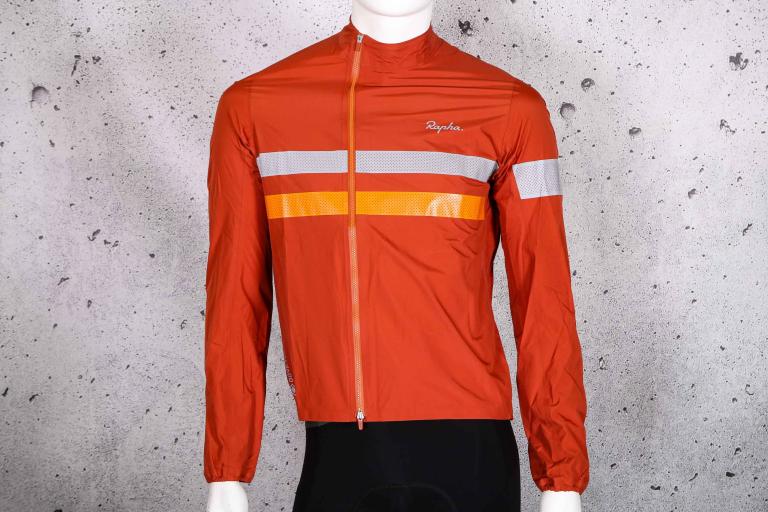 Great combination of waterproofing and breathability, but expensive and doesn't cover your rear that well 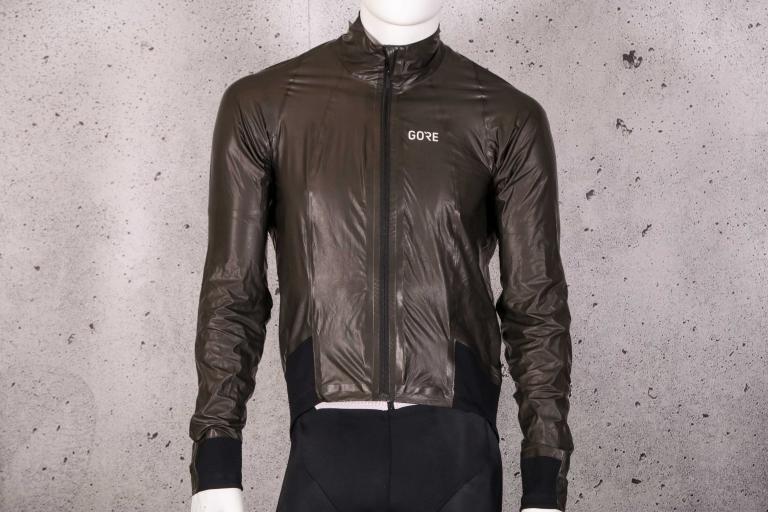 Top wet-weather performance from a very lightweight and breathable waterproof