The Sigma Buster 700 front light is a rugged torch type light boasting four sensible modes and decent build quality. Personally, I reckon it's a marked improvement over its 600-lumen predecessor. However, though by no means poor value, at rrp competition is fierce, with many offering a better spec for similar money.

We have a high-quality composite casing, incorporating cooling fins for efficient heat dispersal. This is very solid, resisting the usual, everyday carelessness handsomely (including accidental drops onto the garage floor from a metre or so).

The 3300mAh lithium-ion battery features the usual cut-out to prevent damage from depletion and over-charging. Behind the lens, we have the ubiquitous Cree LED and a decent quality reflector.

This is a sensibly proportioned affair that's easily operated even when wearing winter-weight gloves, but positive enough that accidental power-ups in a bag or pocket are unlikely.

A 'double prod' technique is necessary to power up. There's no memory function, although given we're talking four modes it's hardly a deal breaker. It defaults to 700, then 350, 170 and finally, flashing. Powering down requires a sustained, two-second press.

It also features a dip-beam: a quick double-prod allows rapid switching between 700 and 170 lumens, which is nice when you're transitioning from sticks to suburbs.

Charging is relatively pedestrian, though typical of this genre: 4.5 hours, slightly less, at the mains. Not ideal for workplace refuelling, perhaps, but easy enough courtesy of that ubiquitous micro USB cable.

There are two. The bar mount is a standard screw-type like that employed on the Xeccon Spear 900. A little dated, and arguably less convenient than the watch strap type used on Blackburn's Dayblazer 800 and 1100 when locking up in the street, nonetheless it offers decent tenure to bar/stem diameters between 25.4 and 31.8mm. 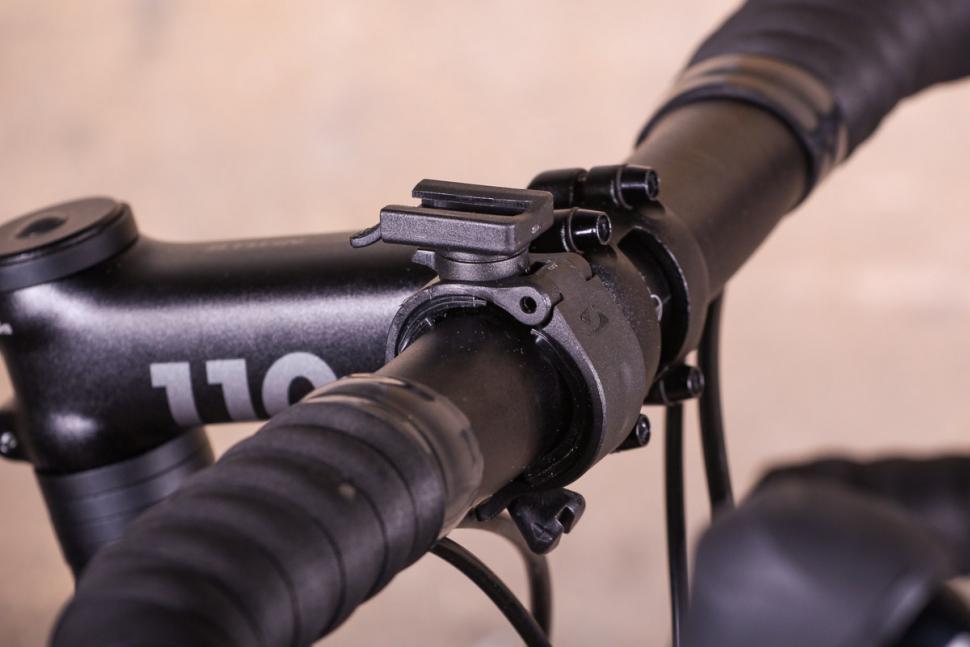 Overall performance impressed me. To my surprise, the full 700 lumens was visible to around the 100 metre mark. In navigational terms, the spot beam is good enough for 17mph along unlit country lanes, with ample warning of potholes/similar hazards. Oncoming traffic registered me from 30 metres or so. It's a similar story when tackling canal towpaths. I've had 1hr 57mins from a full charge.

The 350 lumen is a funny one. It's a little overpowered for town, a little under for semi-rural work. Nonetheless, it's assertive through suburban stretches and great for reading road signs or tending road/trailside mechanicals, too, especially when helmet-mounted.

Other traffic seemed to heed me at 20 metres – 30 or so, atop a lid. Beam quality is also refreshingly pure, and it's returned 3hrs 56mins from a full charge.

In built-up areas 170 lumens is about right, where the priority is being seen. In this setting I've tended to pair this to a blinkie in flashing mode.

Talking of which, the Buster's flashing mode is captivating. Delivering 700 lumens, it's a decent daylight option and certainly good enough for murky morning/late training rides. Friends reckoned they could spot me from around 250 metres at dusk, nearer 280 after dark.

I've tended to run this setting alongside my hub dynamo lighting on long, night rides (since one hub produces less than 3w at slower speeds). It's also pleasingly frugal: 17hrs 53mins when fully juiced.

On paper, the Buster 700 sounds unremarkable, pitted against the likes of Blackburn's Dayblazer 800. However, decent output and generally frugal run-times close the gap. Its composite construction saves a few grams, meaning it's less noticeable worn atop a helmet, and it has served me well for camping/similar duties.

With its powerful 700 lumen luminous flux and 100 m visibility, the BUSTER 700 from SIGMA is a reliable partner for nightly bicycle tours. The bicycle helmet light, equipped with a powerful LED from Cree, has four light modes as well as a fade-in and fade-out function. An integrated slider allows an easy connection with the helmet holder.

With the 4 lighting modes mentioned above, different lighting scenarios can be implemented with the BUSTER 700. In power mode the helmet light shines with a full 700 lm for approx. 2 hours. The standard mode allows an illumination time of up to 4 hours with 350 lumens. In the energy-saving Eco mode, the BUSTER 700 lights up with 170 lumens for up to 8 hours. In addition, there is the flash mode, in which the bicycle lamp turns on and off alternately for up to 18 hours

Splash-proof according to IPX4

Composites feel really solid and have resisted the usual, everyday carelessness without any obvious signs of damage.

Bar mount was slightly agricultural compared with some, but nonetheless secure and compatible with all those between 25.4 and 31.8mm diameter. Helmet mount also no frills but similarly reliable and effective.

Meets IPX4. Good, in the everyday sense. Passed my garden hose test without incident. However, be sure the micro-USB port flap is always fully home.

Generally decent run-times relative to others in this class; 4.5 hours recharging is also typical of these commuter-plus lamps.

Better than I was expecting, especially navigating unlit lanes.

Less appealing than some on paper, relative to specification. However, four sensible modes cater competently for most contexts.

Overall, the Buster 700 seems a better front light than its 600 predecessor. Though a little underpowered for serious rural speed work, navigational prowess is good enough for 17/18mph and the beam quality is quite captivating to oncoming traffic. Flashing is also very good and (as would be expected), frugal too. There are more powerful units that represent better value, if you are needing additional power on your commute/training run. That said, overall, it addresses the design brief competently.

Brighter than numbers suggest, intuitive to use and feels solid.

By no means poor value, but specification lower than some at this end of the market.

A little expensive at rrp relative to output and features, but mostly on sale online for less than £50.

Would you recommend the light to a friend? Would be worth considering.

It's a decent light that covers most bases but faces stiff competition at this price point.