9
10
The highs and lows of a unique brand and the business behind it, told from an informed perspective
Weight:
1,240g
Contact:
tomakeridersfaster.com

It is hard to believe that the Cervélo brand is barely more than 20 years old, such is the impact that it has already made at the highest levels of cycling. In To make riders faster, Anna Dopico covers the history of Cervélo as an independent business, from its creation though to eventual sale – and the highs and lows along the way. It is essential reading for fans of the brand – but will also appeal to anyone who wants to know a bit more about how the cycle industry works.

This book covers phase one of the Cervélo story, in which Phil White and Gerard Vroomen 'establish themselves as innovators in the cycling industry in less than a decade'. They were two university students who 'lived like paupers, built a world-renowned brand from nothing, and later had the fight of their lives to keep their company, Cervélo, from ruin'.

I have spent all of my working life in the cycle industry, and have an interest in books about the brands I know and use. There are several of them on my bookshelf, and most are largely corporate 'puff pieces' from names such as Shimano, SRAM, Specialized, Campagnolo, Colnago, and Cinelli. They are mainly about brand and image, and it is likely that the marketing departments were heavily involved in them.

I knew that marketing people would not have much influence in this book, because Cervélo has always been rather disparaging of the priority given to marketing over engineering in most competitors; it often used the line: 'We apologise in advance if our ads look like they're written by engineers. We figure you would rather read an ad designed by an engineer than ride a bike designed by a marketing department.'

Sometimes brand-specific cycling books do cover the business side of a company, and when there are some useful lessons to be learned then the broader academic and business worlds would class them as 'case studies'; those of us with an interest in the products are just happy that such books provide more of an understanding of our favourite brands.

Perhaps the closest I have to a 'warts and all' history of a cycling business is Tony Hadland's one about Raleigh, where there were plenty of ultimately fatal errors to offset against the undoubted success stories. I now have another book to rival it: To make riders faster. 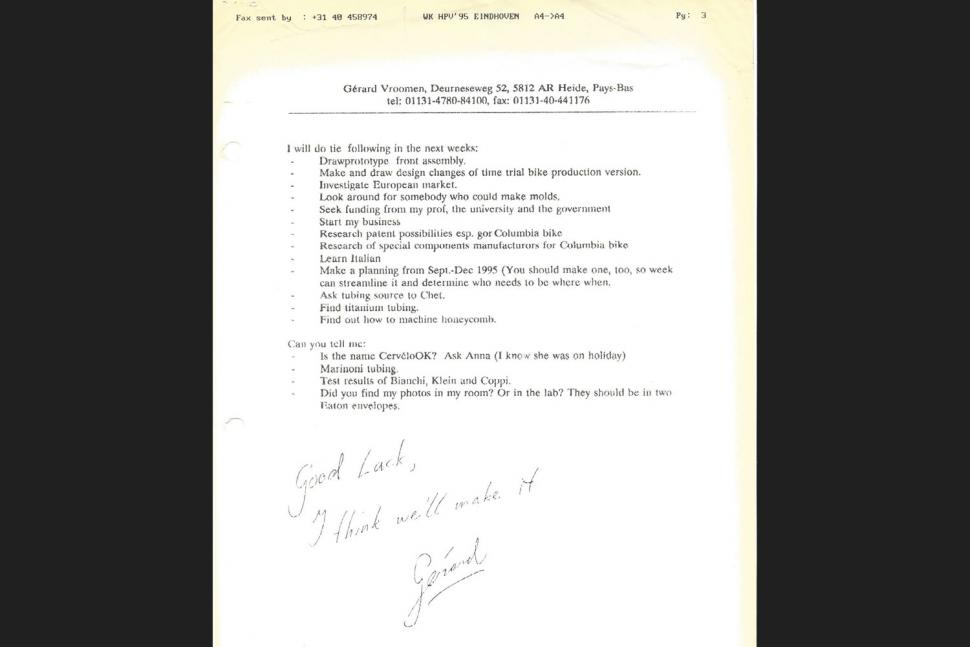 The author of the book is Anna Dopico, and you might ask what qualifies her to write the book. It is not immediately obvious from her name, but she is the longstanding wife of Cervélo's co-founder Phil White, which provided her with a unique insight into the rise and fall of the company; she also worked for the company during its last few years of independence.

Dopico literally gave the business a roof over its head in the early days, and seems to have been remarkably tolerant of what went on in her house. Eventually, she says, 'I knew I was reaching my breaking point when I prevented Phil from expanding into another bedroom of our home.'

I was interested in the book partly because I own a Cervélo and respect the brand, but also because I worked for the company that distributed the bikes in the UK for a few years, and had experienced some of the story from further along the distribution chain. I wondered if the book would try to gloss over some of the difficulties within the company that I had observed (and which many of you will have endured as a customer): in short, it doesn't. In fact, it is remarkable just how open and honest Dopico has been.

Throughout the book one is reminded of how little can separate success or failure: with different decisions, luck, or timing, the Cervélo story could have been very different. It is no surprise that it was cash flow issues that finally proved to be insurmountable for the company, as is so often the case in business, but it was revealing to see how much this affected the business throughout its life.

Taking a look at some of the things that Cervélo undoubtedly got right, the main one has to be the importance attached to a frame's aerodynamic performance – bearing in mind that this was back in the mid-90s, long before it became the dominant theme that it is for the industry today. Wind tunnels played a major part in product development, which 'distinguished the company at the outset from the rest of the industry, which ignored aerodynamics and typically used wind-tunnel testing primarily for marketing purposes'. However, if no one else shares your vision then you won't sell many bikes, and 'road cyclists tended to be conservative traditionalists who resisted change and were slow to adopt new technologies'. Triathletes, however, 'felt underserved in the market...and recognised the importance of aerodynamics', so they became the target market. Logical and successful, as ultimately this led to the brand dominating the 'Kona count', which tallies up the brands of equipment used in the world's most famous Ironman triathlon; having overtaken the previous market leader (Trek) in 2005, Cervélo has held the top spot for bikes ever since.

The fact that Cervélo is now equally well respected for its road bikes is largely down to a brave decision to sponsor the CSC-Tiscali team for 2003. For sure it raised the profile of the brand, but it also stretched many areas of the business, from production capacity to (inevitably) cash flow. You may even have suffered from the decision that 'as soon as bikes are made, they'll have to go to the team. Retailers will have to wait. That's going to piss them off'.

Another bold choice was to increase its involvement in professional road cycling by running a male and female Cervélo TestTeam for 2009, with the teams owned and run by the business for the benefit of the brand; even the largest companies in the industry would struggle to justify the level of investment required, and the chance of finding a suitable co-sponsor was much reduced by the developing global financial meltdown. 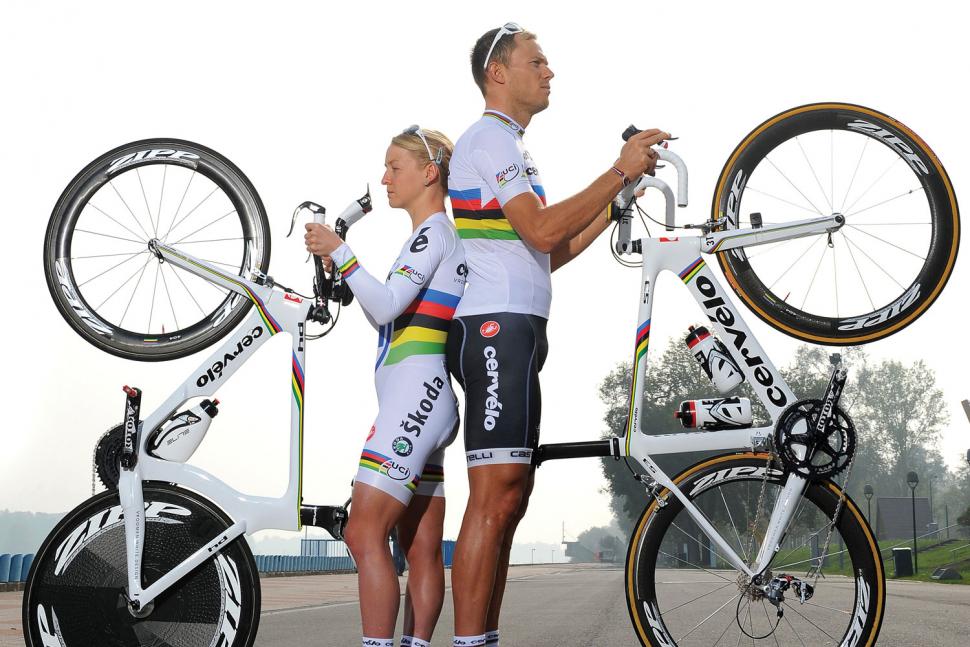 It is no surprise that Cervélo looked to Asia for the production of its first carbon fibre road bike, the R2.5, attracted by the lower labour costs; however, such a move often brings its own set of challenges, and Cervélo encountered many of the same problems that have beset others – including sales of knockoffs, unauthorised changes to carbon layups, and unplanned production processes.

As well as limiting stock availability, this also led to some product failures and even a recall – initially on the R2.5, which will have affected many of the 'early adopters' of Cervélo's road bikes (and is still active). The later Wolf SL fork recall affected even more people, but is a rare example of a brand taking responsibility even if the original manufacturer has declined to provide support.

The P4 seemed to consolidate many of the problems that Cervélo had experienced into one bike, and capped it all off with an unexpected issue: the name. Apparently, 'in Cantonese and Mandarin, the number four is considered unlucky because it is nearly homophonous with the word death'; perhaps that explains why we have not seen an R4, S4, or C4.

When your quest is 'to make riders faster', then you need to look beyond the orthodox and try new things; the associated risk is that you might not get it right every time. However, the continued demand for the bikes showed that the customers appreciated the results of Cervélo's advanced engineering, and it appears that the engineers continue to push the boundaries to this day.

As you might expect, the brand's success eventually attracted attention, and potential buyers began to approach Cervélo to 'negotiate acquisition'. However, as is often the case with entrepreneurs, 'Phil and Gerard were not ready to sell. They felt they had more to accomplish.' With the benefit of hindsight they might have taken a different view.

Once it became clear that Cervélo was no longer viable as an independent business, Vroomen and White took the decision to sell the company to Pon Holdings before they lost everything that they had worked for during the previous 16 years.

I can imagine that it would have been emotionally challenging for Dopico to revisit those days, because even though 'we'd escaped personal ruin while providing Cervélo with a future, I hadn't yet come to terms with the experience and felt a tremendous amount of guilt.' I hope she realises that fans of the brand will be very pleased to have such a good record of the first phase of Cervélo's history – and that it will have wider appeal as a case-study on business success and failure.

The highs and lows of a unique brand and the business behind it, told from an informed perspective

Make and model: To Make Riders Faster by Anna Dopico

THE INSIDE STORY OF CERVÉLO

The inspirational story of two entrepreneurs who took their company, Cervélo Cycles, from a school basement project in Montreal, Canada, to their bikes winning in the Tour de France, the Olympics and Ironman. They built the most sought-after cycling brand in less than a decade.

The book begins with Vroomen and White meeting at McGill University in 1995 and takes you on a wild ride of success and setback. The book shares personal stories, cycling stories, business stories and engineering stories.

TO MAKE RIDERS FASTER is a 256-page hardcover book with the story woven through words, pictures and quotes - a unique combination coffee-table book and business biography that reflects the Cervélo brand.

Expensive, but reasonably big and glossy.

You rarely get so much insight into the business behind a brand.

Some might welcome a bit more information about the engineering behind the products.

Would you recommend the product to a friend? Yes, subject to knowing their interests.

It is a fascinating book for fans of the brand, but will also have appeal to others interested in the cycling industry; it joins the limited number of books that are prepared to be quite so revealing about the successes and failures of a business involved in our sport.