This is a very simple light that took me back a few years. Look into the reinforced plastic lens, which supposedly projects a 270-degree arc of light, and there are old school diodes and printed circuit board. The quality of plastics is good rather than great, but it's survived an accidental drop from 30cm without any obvious signs of scarring.

The diodes sit in a domino formation, the most potent dead centre. Though these look less sophisticated than the COB setup employed in the Xeccon Mars 30, both work to the same principle. Once the internal sensors register deceleration, all the diodes engage.

In our world of bewildering modes, I found myself intuitively trying to find more than the one on offer. It's literally a choice of on and off. Oxford doesn't cite lumens or any other numbers, but I was pleasantly surprised by the single diode's intensity.

It doesn't rival a 15-lumen flashing/strobing unit, especially on the darkest lanes, but used on its own, the single diode is still extremely prominent from 50 metres. Peripheral bleed is similarly effective.

Ordinarily, visibility tends to dip round town, given the competing illuminations, but the braking function proved surprisingly intense and arguably more potent than the Xeccon Mars 30, mentioned above.

In common with the Mars, the 'brake light' function isn't that precise. Most notably on a climb and when riding fixed, any loss of momentum induces the five diodes and it takes a few seconds' acceleration before they shut down.

Although technically undesirable and something to knock, this lag actually helped with remaining conspicuous along dark lanes and in stop-go rush hour traffic. Friends also reported that the diodes, though not retina tickling (thus socially acceptable on group outings), are suitably brusque at close quarters.

In a straw poll of friends on two wheels and piloting four, visibility is to around 100 metres on a crystal clear, starry night. Not amazing on paper, perhaps, but reasonable in the real world, especially when price is factored into the equation.

Although I love the convenience of USB rechargeable technology, I still have a soft spot for AA/AAA batteries for secondary lighting. They're cheap to run, provided you're using rechargeable NiCd, and can be bought pretty much anywhere. I always carry one on dusk til dawn all-nighters.

The OEM batteries lasted 90 minutes tops before plunging me into (temporary) darkness. Fresh fare from pound shops returned between 10.5 and 12 hours, subjected to a diet of stop-go commuting and longer, steady jaunts, a loosely similar story with better quality NiCd rechargeable batteries.

I'm told the light meets IPX4, which is essentially bog-standard rainfall. At this price point I'm used to the crude but effective 'elastic band' type seal but none were evident here. As a precaution, I'd recommend adding a lick of silicone grease (or Vaseline) to the contacts, especially if you're shunning mudguards or mounting it on the seatstays. That said, it hasn't missed a beat during some heavy showers. I've whipped it off when giving bikes a very sudsy wash down, mind.

The reassuringly sturdy rubberised stabiliser and watch-strap type mount offers gentle yet reliable tenure to most diameters of tubing, the full zodiac of seatposts (25.4 to 31.8mm) and even pencil thin steel frame tubes. 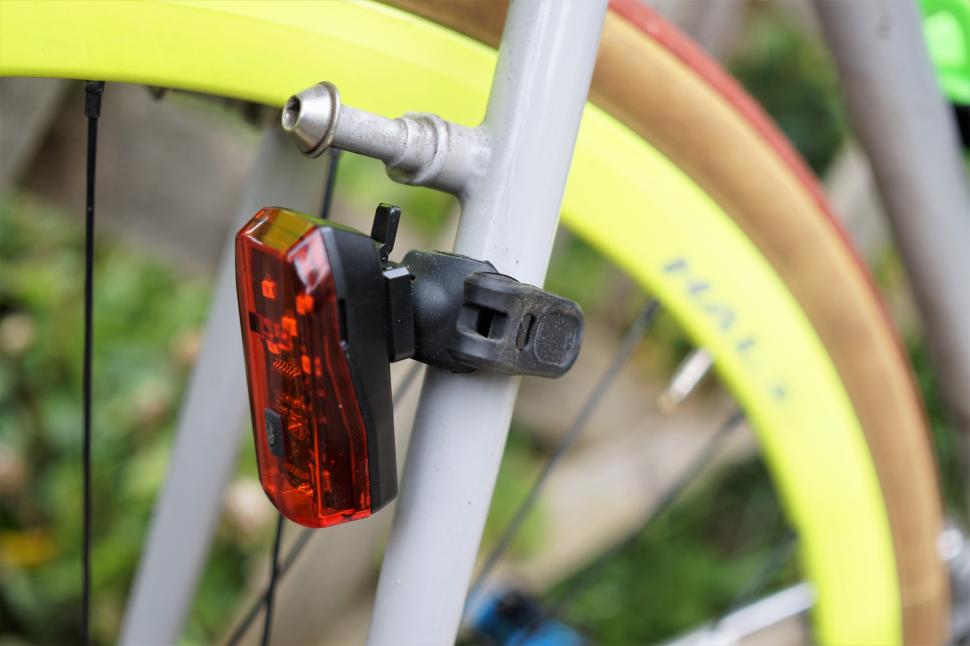 There is some scope for helmet mounting too, which proved quite handy for roads with a high number of HGVs and other large vehicles. Some suggested a clothing clip was a missed opportunity, but that's not a deal-breaker for me. The switch is a small black rubbery affair that engages with a positive click: no hint of accidental power-ups when the light's been holidaying in pockets or bouncing around in messenger bags/luggage. Locating it in the dark, wearing full-finger gloves, proved trickier than some, but the subtly raised profile isn't overly faffy, either.

The Oxford light is a simple but surprisingly bright unit that could work out quite frugal, used with rechargeable batteries. If the stop-light function isn't a priority, there are five-mode, 15-lumen, USB rechargeable, shop-branded models for similar money, and with superior build quality and weather resistance. It's a useful concept, though, the stop light, and has serious potential for trailers and tagalongs, though I can't help thinking this technology is yet to meet its true potential.

Oxford describes it as a single high-power LED with 5 LED 'Stop' Light.

I'd say it's a simple and surprisingly effective light, but I'd be inclined to run it in conjunction with a flashing unit along unlit roads.

One mode, on/off, doesn't get simpler than this (in the most positive sense).

Meets IPX4 and coped fine with showers and heavier rain, but I've not subjected it to my hosepipe test, and been inclined to remove it during sudsy bucket washes.

Poor in the first instance but this was attributable to the supplied batteries. Oxford doesn't cite an approximate run-time but in a mix of urban and open road use it's returned 12 hours.

Better than I was expecting.

What I'd expect from this end of the market and by no means poor.

It's not bad value, but even allowing for the "braking" function's relative intensity, some multi-mode, shop-branded competition have an edge on this front.

Overall, the Stop light has grown on me. The slightly old school single mode and single diode is brighter than I was expecting and when flanked by the other five, quite impressive. It's not a brake-light in the car/motorcycle sense - it's not on/off - but the lag is actually very welcome, providing some more bite. Though I've predominantly run it on the bike, the strap will entertain some helmets - handy round town. Run-times are middling and will depend upon how much stop-start work you do. However 10.5-12 hours from top quality rechargeable batteries is reasonable and economical in the longer run.

Single, steady mode is less conspicuous along unlit, open roads, so I would pair it with a blinker if this was my regular riding.

Would you recommend the light to a friend? Yes, but probably as a secondary system, outside of suburban contexts.

It's a surprisingly bright, simple light that doesn't feel gimmicky; build quality is good, rather than great, so overall I'd say it's above average.