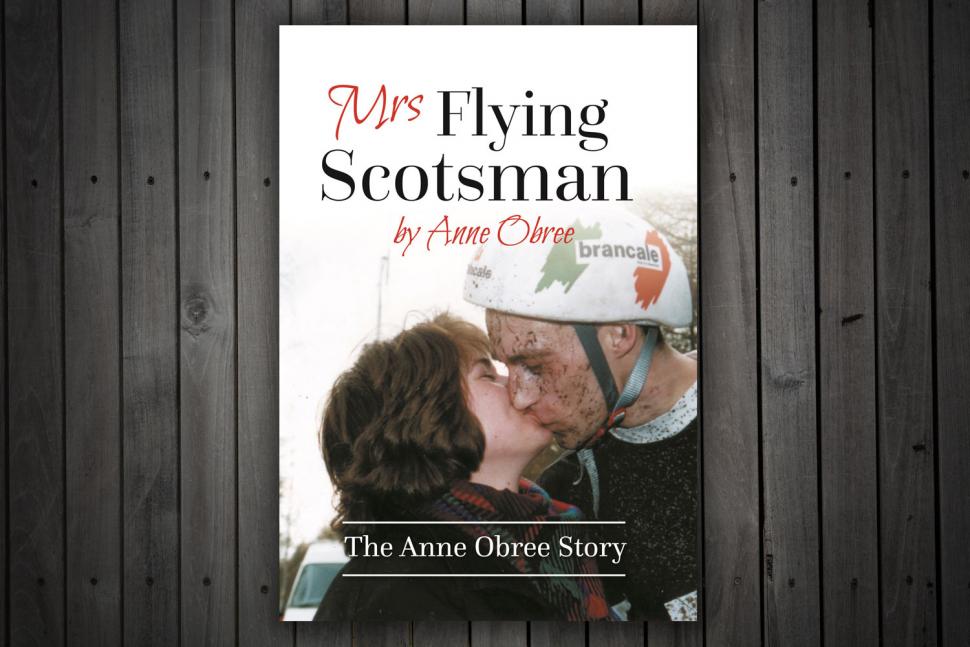 8
10
Effectively the untold story of Graeme Obree – by his former wife
Weight:
410g
Contact:
AnneObree1@hotmail.co.uk
How we test

Much has been written about Graeme Obree's spectacular cycling career, including by the man himself; now, some 25 years after Graeme first announced himself on the international stage, in Mrs Flying Scotsman the person who knows him best gives us considerable insight into his personal life during the highs and lows of his career.

It is often said that behind every great man there is a great woman – and that woman will often have a unique 'behind the scenes' perspective on the great man's achievements. In her choice of title, Anne Obree has recognised that for most people the opportunity to find out more about Graeme rather than Anne will be the biggest draw for this book, and she duly delivers.

Obviously Anne's 'life before Graeme' is also covered, but takes barely 50 pages. Anne does not attempt to gloss over the various challenges met (and mistakes made) along the way, while covering matters like concerns over her weight, commitment to God, obsession with horses, discovering boys, training as a nurse, and more.

Anne suggests that the book might be 'a bit too honest in some areas' – but that helps it to deliver on the promise of 'a frank and open account of all our trials and tribulations, while we enjoyed the excitement of Graeme's cycling success'.

As Graeme says in his foreword, 'Anne wrote all of it in her own words and...it may have been more fluent and sophisticated had it been written for her'. An editor was brought in to refine her words, and they have done a good job of leaving Anne's own emotions and feelings to show through – which is what I want from an autobiography, although there are still some spelling mistakes and grammatical faults.

However, I suspect that most people will want the book for the story, and will be prepared to forgive any flaws in the presentation.

If the story of Graeme's life is like a jigsaw, then obviously his own book, The Flying Scotsman, supplies many of the pieces – and Mrs Flying Scotsman supplies several more. The arrival of Mrs was an obvious prompt to go back and revisit stories previously told by Graeme.

You soon discover that Anne is willing to say things that Graeme did not want to at the time of his book – or might not have been allowed to (perhaps because of the publisher's legal concerns); by going down the route of self-publishing, Anne has taken advantage of her freedom to say what she wants.

Much of Anne's book complements what Graeme has already written, and sometimes expands on it. Here is an example of a story that Graeme 'had forgotten, or never knew in the first instance': he does not mention his first meeting with Robert Millar, but the event certainly made an impression on Anne. 'He decided to introduce himself to this fellow Scots rider whom he has always admired' at the Isle of Man Festival, but 'Robert was extremely rude pushing past Graeme's outstretched hand saying, 'People to see, things to do!' I found him most unpleasant, not to mention rude.'

And an example of where Anne is prepared to say more than Graeme: Graeme recounts the arrival of local businessman Eddie Tierney and his sponsorship, and the war of words when Graeme tried to get his equipment back after the relationship soured. Both agreed 'that neither of us would hassle the other' and in Graeme's account, that is the end of it. Anne, on the other hand, recounts that the argument went further than mere words: 'he even visited us in our home in Ayr, grabbing Graeme by the throat, hoisting him in the air with his feet dangling off the ground.'

Graeme's own book was published in 2003, so we only have Anne's coverage of subsequent years – but what a tumultuous period it was. This is where Anne's book comes into its own: there have been various interviews with (and articles about) Graeme over the last 15 years, and inevitably there will be some misinformation, and Anne has tried to put the record straight and prevent any misunderstandings about Graeme's life.

In these later years, things are a lot quieter on the cycling front (with the exception of The Beastie project), but they sure are busy on the domestic front – with Graeme coming out as gay and an eventual divorce from Anne being a couple of the life-changing moments.

The story of Obree introducing a new cycling position and conquering the world twice is well known, as is the subsequent banning of both positions by the UCI; less well known is how it affected Graeme mentally. It is quite exceptional for that to happen once in your life, let alone twice, so it should come as no surprise that such highs and lows contributed to some of the less happy periods of Graeme's life, including alcoholism, depression, and attempted suicide.

Furthermore, 'he felt 'cheated' of his career because of the cheating that was going on inside the professional racing scene which is all being exposed now'. You could argue that the punishment Obree suffered for trying new positions was greater than that given out to the drug takers competing in that era who were caught or admitted guilt, which doesn't seem right. Apparently Graeme is somewhat mollified when Anne reminds him that 'they had to cheat to beat you'.

For me, the highlight of the book is hearing more about this aspect of sport and the effect it can have on the athlete and the family – and to hear it from someone who has first-hand experience. Just be prepared for an emotional roller-coaster.

> Buyer's Guide: Essential reading – 26 of the best books about cycling

Despite the challenges that the couple have faced, this is no exposé from an embittered ex: they remain great friends, still support each other, appear to have no regrets – and even work together on the book's publicity tour.

A significant consequence of choosing the self-publishing route is that you have to make your own distribution arrangements, so don't expect to find it in your local bookshop. If you want the Kindle version then it is available on Amazon, and I understand that the printed version will also appear there shortly.

If all else fails then an e-mail to Anne at the address up top and a PayPal transaction will do the job.

Effectively the untold story of Graeme Obree – by his former wife

A detailed, true account of my life before, during and after my marriage to the cycling legend also known as The Flying Scotsman, Graeme Obree. It is the most up to date biography taking the reader right up to 2016 which includes Graeme coming out and leaving the family home to everything in between. It tells of both our struggles with bereavement, addictive behaviours and the effect this had on both us, our two children, our families and friends. It has sad moments, happy moments as he became successful overnight as he achieved World class status as a track rider and Hour Record man. the end gives the reader hope that you can get through even the hardest of times with a faith in God, caring family support. It is how I perceived how the banning of his position affected his mental well-being amidst the prolific drug taking culture. The foreword has been written by Graeme who is behind this book although a bit too honest in some areas. I hope you all can read it not judging my ability to write well but to tell you about my life.

Reasonable value as a paperback, and a good Kindle deal is available.

It helps to complete the picture of Graeme Obree's life.

The challenge of frequent cross-referencing with Graeme's own book.

I'm not scoring this book highly for the quality of writing or its illustrations but because it reveals so much about the story of a much-loved maverick cyclist and his turbulent family life.