7
10
A guide to pubs-with-a-difference that are worth seeking out, preferably by bike
Weight:
850g
Contact:
www.halsgrove.com
How we test

Pubs play an important part in all of British life, including our cycling trips. Unusual Pubs highlights a few that are particularly memorable because of some special feature, and sometimes that alone can make them worth visiting; however, if you need further encouragement, many are particularly well suited to those travelling by bike (or boot or boat), which would make the trip even more rewarding.

As Barton explains, 'there are many pub guides that will tell you about beer selection, wine lists and menus, but those concentrating on unusual, peculiar or odd establishments are rare'. If you want to seek out a pub primarily because it has 'an unexpected location, out-of-the-ordinary décor, a notable feature or collection or surprising architecture' then I doubt that you will find a better guide than Unusual Pubs.

The pubs featured were not rated for the quality of their food, but fortunately there is frequent reference to the range of beers on offer – which is not surprising, given that the Campaign for Real Ale used the knowledge of their local members to suggest many of the entries. The 150 chosen is a very small proportion of the 35,832 that you will currently find on CAMRA's online pub guide. 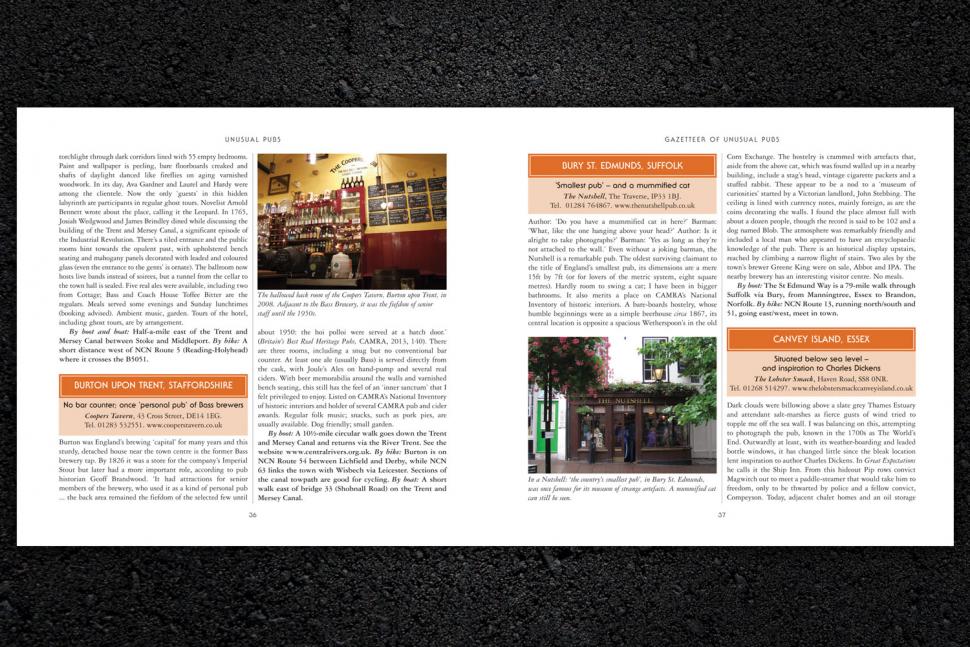 The range of 'special features' that make each entry stand out from the 99.6% that did not make the cut is extraordinary, and sometimes barely believable. Some entries are to be expected, such as the smallest or oldest, but how about the most frequently flooded pub, one with a collection of 900 bookmarks, or one with a dog-powered roasting spit?

Another pub serves nothing but cider, limitations only beaten by a temperance bar that has no alcohol at all! I would prefer the one with 330 whiskies on offer... I could go on, but you get the idea. You couldn't make some of this stuff up: British eccentricity at its best.

Barton does not cover private pubs, 'created by enthusiasts in their homes or sheds', which are apparently quite common; nor does he cover pop-up pubs, although he does give an example of one in a decommissioned phone box.

He laments the alarming rate of pub closures, and naturally hopes that his book will in some small way stem the losses. He is clearly a fan of both pubs and the unusual, having previously written Unusual Railway Pubs, so he seems well suited to the job.

> 22 of the best books for cyclists

The subtitle of the book is 'by boot, bike and boat', from which you will gather that Barton is keen to make the journey as important as the destination, and wants to discourage people from just driving there. Actually, in some cases you couldn't anyway, as there are no roads.

For every entry, Barton comments on any special considerations if you are arriving by bike (or boot, or boat), such as local cycle facilities, National Cycle Network routes, and other attractions that might be of interest in the area. Barton made frequent use of a bike himself when undertaking his research, both a full-size machine and a Brompton – but he also used boats or boots where that was more appropriate.

You can see from the map where the entries are located: some areas have plenty of options, and others are surprisingly barren, so you may not have one close to home. 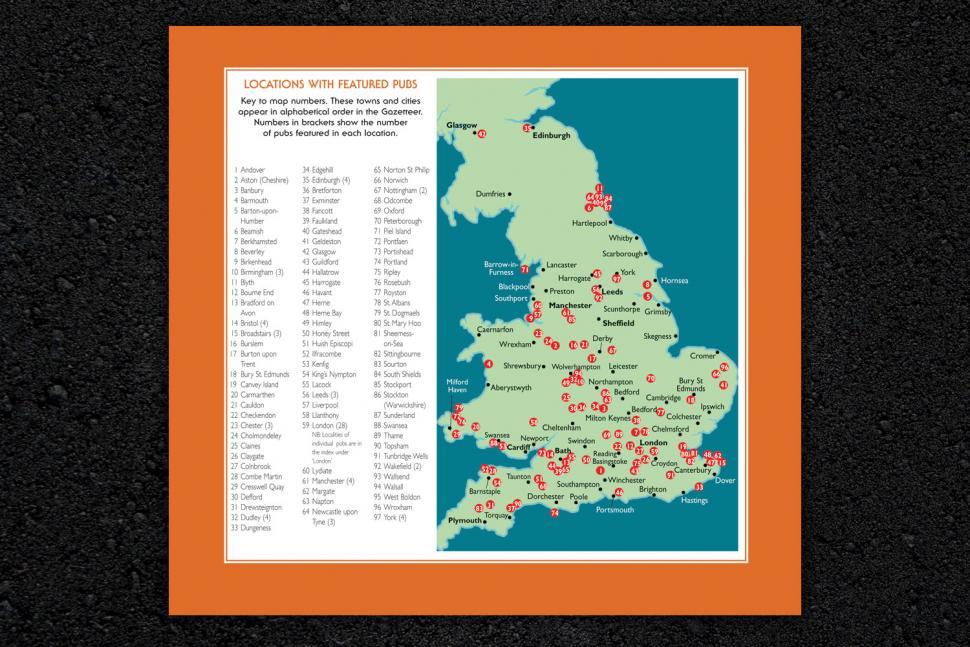 Obviously, I don't know all of the pubs mentioned so I can't comment on whether these really are the most unusual pubs you can find, but for those areas of the country where I do have some knowledge I found the choices to match the local reputation. From now on I will check what pubs are on offer in this book for any new area that I might visit, safe in the knowledge that there will be at least one thing to recommend them.

The book is available from the 'usual outlets', but perhaps it would be more in keeping with the spirit of the book to order it through your local friendly bookshop – if you still have one. Failing that, you can order directly from the publisher.

A guide to pubs-with-a-difference that are worth seeking out, preferably by bike

Make and model: Unusual Pubs by Boot, Bike and Boat

The author has spent three years seeking out quirky hostelries that offer more than your average local.

They're Britain's most surprising licensed premises, where the reader's curiosity will be sated as well as their thirst. Walking and cycling trails to the pubs are included, as are waterways, making this a useful companion for leisure travellers.

Others are on boats, in caves and even a disused public toilet.

Yet more have collections such as bookmarks, ties or musical instruments. There's an inn where Oliver Cromwell held court, others that inspired Charles Dickens. Another leans at such an angle that customers feel woozy without touching a drop.

Amazing locations include beside a lighthouse, an 18-mile-long beach and a seaside pier.

Some can't be reached by road. Pubs lit with glowing gas lamps, with ride-on railways or that double as barber's shops are included. Two were dismantled and re-built in new locations.

The author has been on Britain's most bizarre pub crawl and now you can too.

Fully illustrated with more than 150 author's photos and 17 historical ones.

Bob Barton is former senior press officer at tourist board Visit Britain, feature writer for Best of British magazine, author of Unusual Railway Pubs (Halsgrove) and a member of the Pub History Society.

It encourages you to visit pubs that you might never have known about, though sometimes the 'boot, bike or boat' aspect is minimal or absent.

There are large areas with no entries.

The book does what it sets out to do; just accept that you may not have an unusual pub near you, and that you will find some entries more worthwhile than others.