8
10
A lavishly produced look back at the career of a deservedly popular and successful cyclist
Weight:
2,040g
Contact:
www.bloomsbury.com
How we test

Successful professional cyclist, businessman with a bike brand, and long-standing Armstrong-sceptic, Greg LeMond is known for many things, but as the title of Guy Andrews' book suggests, Greg LeMond: Yellow Jersey Racer focuses on the racing years.

Life after his retirement from racing is not covered, even though he was often still associated with the sport and there are many worthwhile stories to be told from his life after racing.

The 'Yellow Jersey Racer' in the title is appropriate, because LeMond's sporting career is normally defined by those jerseys, but one should not overlook his success in other races, most notably the Road World Championships. On his list of four 'Cycling Goals' that LeMond wrote in 1978, both the Junior and Senior Worlds were listed, along with 'Win Tour de France by age 25'. Only the Olympic Road Race (when it was contested by amateurs) has eluded him – but three out of four ain't bad.

Success in those races was not really matched by success in the one-day classics, and LeMond once said to Sean Kelly, 'I'll trade you a Worlds title for a Paris-Roubaix.' Each chapter also benefits from a great selection of classic images from the relevant year, mostly by one of the photo agencies: you may have seen some of the images used before in books and magazines, and others are new – but all are worth seeing. Many of those pictures are joined by a lengthy caption in LeMond's own words, 'highlighting some of the key moments that help convey what racing was like during my time in the peloton'. This is not an in-depth biography, but reading about those important moments is very revealing about both LeMond and the sport at the time. 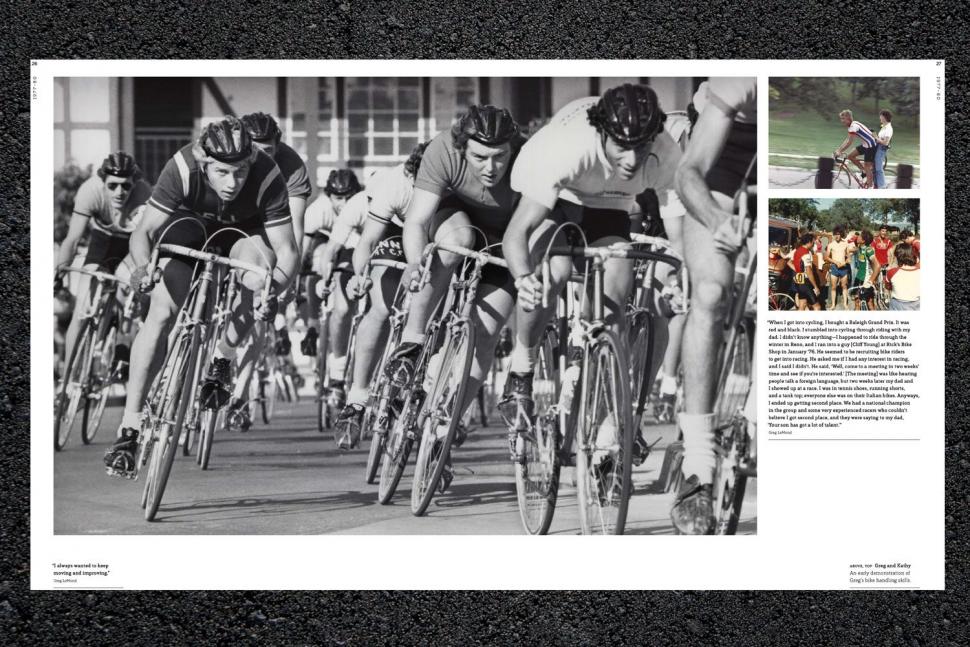 You can see the evidence of LeMond's impact on the sport in some of the photos, as he was an early adopter of eyewear (with Oakley), helmets (with Giro), and cycle computers (with Avocet), among other things; later on he was one of the few to try RockShox front suspension during Paris-Roubaix in 1993. 'He wasn't always the first to use them, but he was often the first to be noticed using them,' writes Andrews, 'and in some cases that made all the difference to the commercial success of a newly launched product.'

LeMond is also known for managing to successfully negotiate high salaries, although as he was one of the few willing to talk about money, it is hard to know just how well he did compared to his peers. Not only did Bernard Tapie offer him £1 million over three years in 1984, he would also be paid $1 for every Look pedal sold: the pedals were new on the market, and LeMond would be helping to promote them during his time with the La Vie Claire team. It is ironic therefore that LeMond had taken a pay cut from $30,000 racing as an amateur in the USA, to about $15,000 when he first moved to Europe as a professional rider with the Renault team in 1981. There are several moments in LeMond's career that even those with only a passing interest in the sport will have heard of, and one has to be the time trial that brought the 1989 Tour to a close, at which LeMond went full aero and his main rival (Laurent Fignon) didn't: wheels, helmet, and above all tri bars. Much has already been written about that day, and there is more here, but rarely do you get to read about a related story: 'In [May] 1989, at the Tour de Trump, we at 7-Eleven knew about the triathlon handlebars, but we were trying to keep them in reserve for the Tour de France,' writes Ron Kiefel. As it happens the team let Dag Otto Lauritzen use them to defend his race lead. LeMond was also in the race, and recognised the potential of the new equipment.

LeMond is also famous for being shot by his brother-in-law during a turkey hunting trip in 1987. Some may raise questions as to what are suitable leisure activities for a cyclist, but the result is that the injuries affected LeMond for the rest of his time in the peloton – yet he managed to overcome the odds and continue with his successful cycling career. 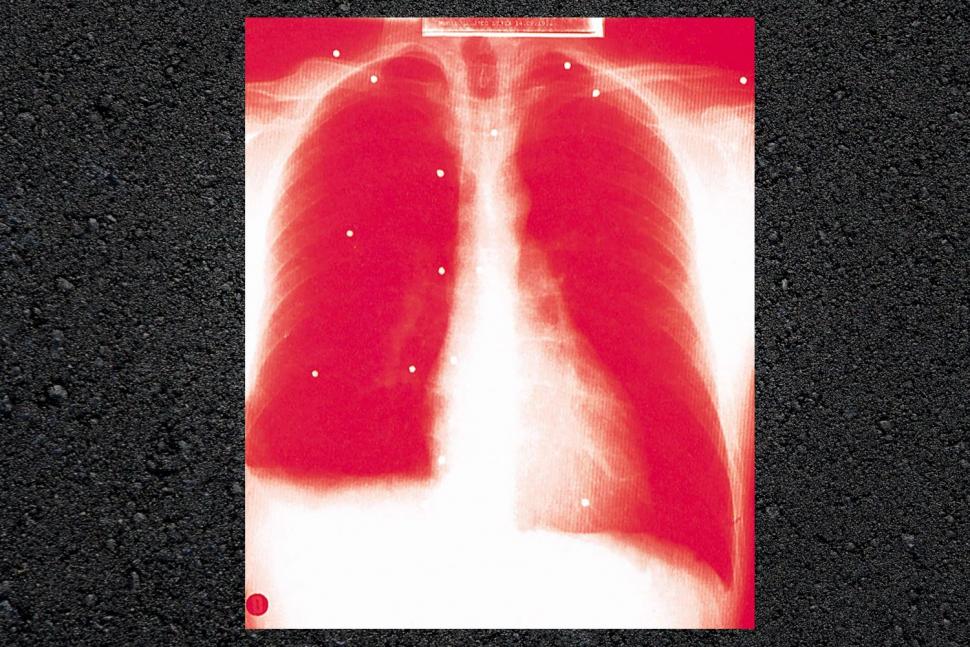 Of course there is another American cyclist who had an equally debilitating setback and came back stronger, but the difference is that LeMond's results will stand the test of time, allowing him to reclaim the title of the only American to win le Tour. However, Lance Armstrong's results in the World Championships still stand, so LeMond has to settle for being merely the first American to win that one.

We can't forget LeMond's feud with Bernard Hinault over 'whose turn is it to win the Tour de France this year?', and whole books have been written (and films made) about it. 'I had a very difficult time, because it was massively confusing for me – Hinault was my hero,' says LeMond. 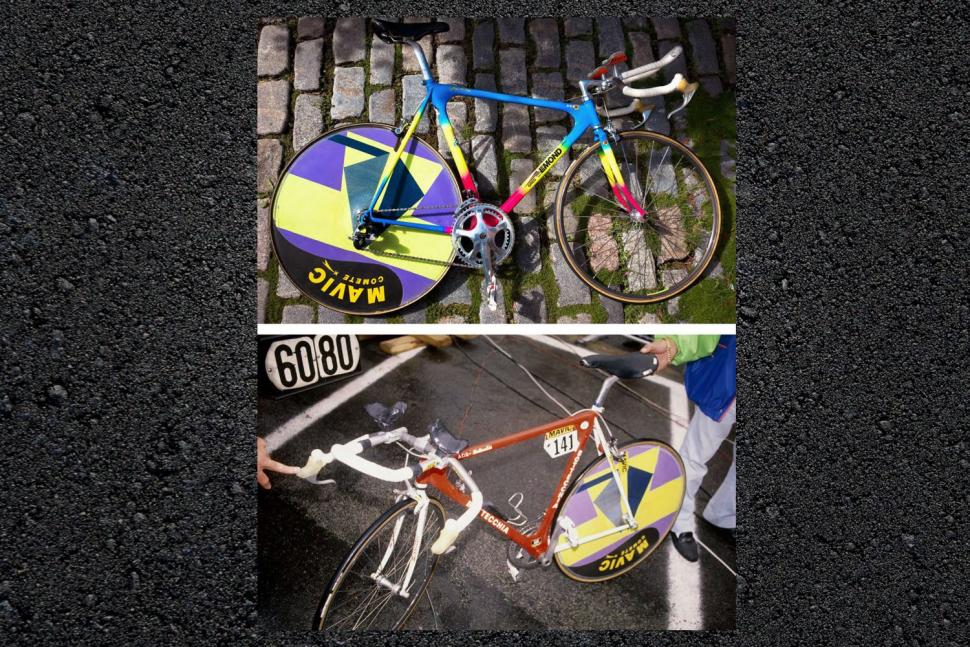 Fortunately for us, LeMond seems to be a bit of a collector, and he has a fine selection of bikes from his racing years. Seven of them have been photographed outside his house in Minnesota, 'on a small stretch of cobblestones he had built into his driveway', and they appear in the book with a full specification and commentary from LeMond. Bearing in mind his interest in exploring new technology, it makes for a fascinating conclusion to the book. It's a great section – and I would like to have seen even more of the bikes!

'It never gets easier, you just go faster.' Greg LeMond

Being a three-time Tour de France winner is only half of the Greg LeMond story. Equally at home on the cobbles of the spring classics as he was on the mountains of the grand tours LeMond rode a full racing season from spring to autumn. His never-say-die spirit also bagged him two World Championship golds and a hatful of podiums at the world's toughest bike races.

LeMond was a talented all-rounder, with a reputation as one of the canniest and taciturn racers of his generation. He was admired by his peers and respected by many of his rivals. But things could have been very different, when in 1987 his story took a tragic turn: While out hunting, he was accidentally shot. He lost so much blood that his life hung in the balance, but his recovery was as miraculous as what happened next, when he came back to the world of bicycle racing.

In LeMond: Yellow Jersey Racer, which presents LeMond's career year by year, big wins are documented with unique and exclusive photography depicting the racing times of this exceptional bike rider. Many of the protagonists in LeMond's world – rivals, team mates and friends – have been interviewed. They speak candidly about his career, how their lives crossed and his legacy in the sport of cycling.

Would you consider buying the product? Yes – as I have very little about Greg LeMond in my bookcase.

This book is extremely good at what it sets out to do. It is not a detailed and definitive biography, so it is not a demanding or lengthy read.