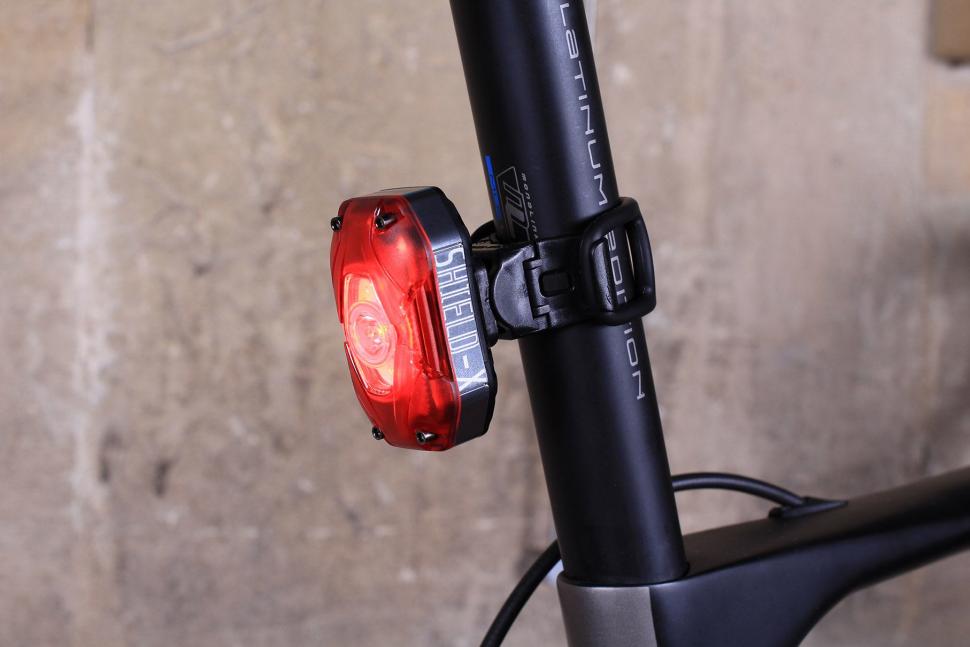 4
10
Build quality issues and such a fiddle to operate it's a turn-off
Weight:
68g
Contact:
www.raleigh.co.uk
How we test

I recently threw out no fewer than six lights that have failed in some way, and the Moon Shield-X Auto will soon be joining them. Three weeks into the test, I went to turn it on and found the on/off button was no longer there. Reason suggests it must have been attached when I last switched it off, so I scoured the garage floor but it never reappeared, leaving me to resort to the distinctly low-tech measure of turning it on and off with a biro lid.

Worse, it leaves the interior vulnerable to water ingress. Modern lights, with their sophisticated electronics, seem very sensitive to this and most of those dud lights were either refusing to switch on, failing to switch off, or randomly doing both after exposure to wet conditions. I subjected the Moon Shield X to an 'instant winter' in my kitchen, dripping some salty water into the hole left by the missing button. The results were spectacular – within minutes the light was blazing like the sun, then flashing randomly until the battery died. I left it to dry out for 24 hours but as soon as I plugged the charger in, it came back on full-power and wouldn't be turned off or switched between modes, with or without a biro lid.

I confess I was a bit relieved it had gone wrong because picking my way through the nine steady and flashing modes was beginning to drive me mad. Fair enough, if you only have one light then you'll get used to how it operates, but for me using the light tended to go like this: clip it into the bracket, turning it on accidentally in the process. Jab the button in an effort to turn it off; but this just switches it to a different mode. So prod the button again repeatedly to get back to where you were. Try two jabs to turn it off – no, this switches you between steady and flashing...

Ah yes, I remember now, to turn the light off you press and hold the button – not unusual among front and rear lights – but only for two seconds because if you hold it for three, it switches to 'Auto' mode. Now try doing all of this while riding along. Not helped by the on/off button being a bit inaccessible on the back of the light, once it's mounted in the bracket.

That Auto mode refers to the built-in light meter which allows you to set this to come on automatically in low light conditions. This sounds a good idea, but since it was so complicated to get there I hardly bothered with it.

I also wonder whether it might lead to accidental draining of the battery... Picture the scene: you set your Shield X Auto to switch itself on in poor light conditions but when you get back from your ride, the sun is out and your Shield X has turned itself off. You put the bike in the garage and shut the door. Darkness falls. Your light turns itself on automatically and shines all night. By morning you have a flat battery. (In its defence, Moon does warn you: there it is in the instructions, the section about auto on/off – a warning triangle with a '!' in it. 'Remember to switch off the light when you do not use it.')

It's a shame because the Shield-X Auto is essentially the same as that reviewed by Stu Kerton here. With the addition of a ring of 20 tiny LEDs around the central one, Moon has been able to add an extra 30 lumens and a useful option to run a steady red light with a pulsing middle light.

The steady modes go through bright, brighter, brightest and brightester. If the light was blinding at 50 lumens, imagine what it's like now it's been cranked up to 80. The lowest setting is plenty bright enough for general riding in traffic; the maximum should really only be considered as a fog light.

It's a similar story for the flashing modes. Then a fifth push of the button gives you 'Day Flash' – a maximum brightness double-blitz that lights you up like an aircraft's landing gear. It's excellent for riding in daylight, especially those frightening low-sun, wet-road conditions that seem to take drivers by surprise every winter.

The 210-degree angle is not as wide as Moon's own Arcturus Auto but still offers plenty of side visibility.

The light comes with three brackets: a belt clip, seatpost mount (with two lengths of rubber band) and a saddle rail bracket. All are well made and sturdy as well as being easy to fit. It makes it a simple matter to move the light between different bikes. A helmet mount and a rear rack mount can be bought as optional extras, so all bases seem to have been covered. The mount uses a square clip which means you can use the light either horizontally or vertically with equal ease. A USB remote control is also available, which I would say is almost essential if you want to make full use of all those different modes (or if the button falls off).

Moon has addressed the issue of the previous model switching itself off when the battery goes flat. The Shield-X includes an 'auto safe mode', which means it will continue to run at reduced output for up to an hour. The claimed run-time (1hr 20mins at full power with an extra hour in 'auto safe'; recharged in 2 hours) seemed pretty well spot on. On my test sample, the supplied USB charger cable was faulty.

It's very easy, in the pursuit of offering something new each year, for manufacturers to spoil a perfectly good product with unnecessary upgrades, and I have to say I think that's what has happened here – not helped by the Shield-X's inability to hold together for more than a month.

A super-bright light for all riding conditions and adaptable to a wide variety of bikes.

Raleigh says: "The Shield X Auto brings a new level of technology to the rear light. The Shield X combines both a spot Cree LED and COB light set for optimum visibility."

This means the central Cree LED is surrounded by a ring of 20 little red LEDs that allow the light to both flash and show a steady light at the same time.

However, suspect build quality means this light may not survive a hard winter.

Rate the light for quality of construction:
3/10

This is a handsome chunk of lighting, machined from aluminium and with a quality feel. However, a vital part of the water-resistance is the cover on the on/off switch, which fell off after three weeks.

Rate the light for design and ease of use. How simple was the light to use?
3/10

The weak point of this light, for sure, not helped by the shaky English in the instructions. Even once mastered it's a considerable fiddle to switch between all nine modes. The Auto setting complicates it further, and I didn't find it useful.

Three brackets are included (seatpost, belt and saddle rail). All are well made from aluminium and simple to use. The clamp has a square profile so you can fit the light horizontally or vertically into any of the brackets. Helmet and rack mounts are also available.

Rate the light for waterproofing. How did it stand up to the elements?
3/10

The loss of the on/off switch and cover doesn't bode well for keeping the moisture at bay, and a little salt water in the resulting hole soon killed the light.

As claimed by Moon, 1.5 hours on full-power, with an extra hour on low-power safety mode. Moon also claims up to 40 hours running on low-power flash mode. Recharge was in 2 hours at 5 volts. The supplied USB cable didn't work, which is a minor issue.

Nine modes struck me as about four too many, though there are plenty of useful functions among them. It just takes a while to find them. Switching between them was impossible once the button had fallen off. Visibility, though, is fantastic.

Rate the light for durability:
3/10

Really, there are enough bits of electronics going to landfill without this.

It's a fair lump but I'd prefer robustness over light weight any day.

Price is on a par with other lights; given the extras included and the upgraded electronics it is actually cheaper than the last generation Shield. But that's no good if it doesn't see you through a few seasons' reliable use.

Fantastically reassuring light with a good burn time and quick recharge, but fiddly to operate. I would have liked it if it had lasted three years instead of three weks.

Brightness, and the variety of brackets.

Auto mode struck me as a bit gimmicky – feel free to disagree.

Not the clearest instructions.

Did you enjoy using the light? Yes, for three weeks.

The fiddly operation was nearly enough to turn me off this light; the on/off switch and cover falling off after three weeks clinched it.

I usually ride: Cannondale CAAD10   My best bike is: