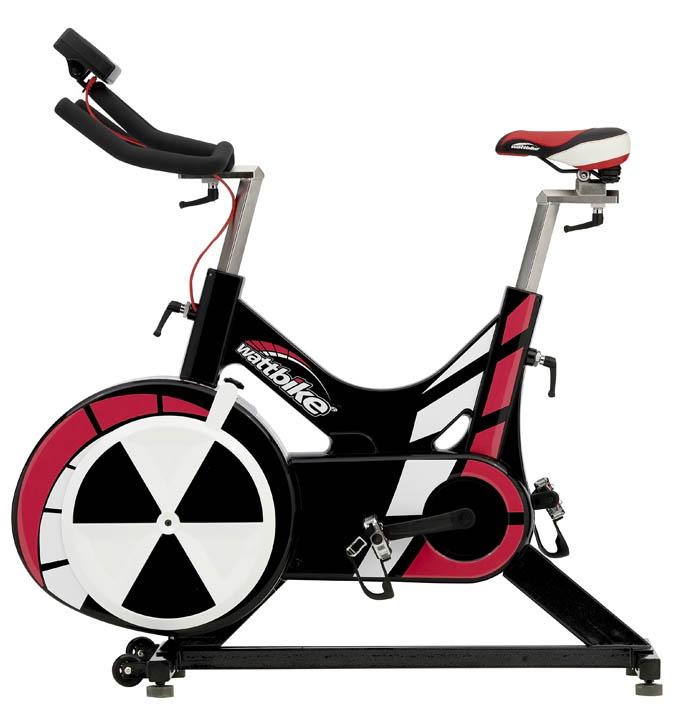 7
10
Good if you need the amount of performance data it can throw at you... if
Weight:
0g
Contact:
www.wattbike.com
What the road.cc scores mean

Part indoor trainer, part science lesson, the Wattbike is a highly developed performance data gathering tool, and a very decent ride to boot. Just make sure you need all the information that it can throw at you: most riders won't get as much benefit from the numbers as they will from the exercise.

What's a Wattbike? well at the most basic level it's a static exercise bike. It's solidly constructed, with a steel frame covered by a plastic body, and instead of the metal flywheel of a spin bike you get an air resistance system coupled with a magnetic unit. And a freewheel. There's a strain gauge within the guts of the bike which can measure your power output, and this information is fed to a bar-mounted console with a good sized black and white LCD display. You can also hook the Wattbike to your laptop and run their proprietary software, either while you're riding or when you're done.

If you've ever been near a Concept 2 rower then you'll recognise the resistance system, an enclosed fan with a variable aperture. Like the Concept 2, it gives a good range of resistance and an excellent feel with a good curve as your speed increases. Like the Concept 2, it's rather noisy, louder than a friction belt spin bike or a good magnetic turbo. The adjustment lever simply shuts or opens the exhaust of the fan, so that it blows more or less air. Shut completely it simply spins the air inside the unit, with minimal drag. Wide open it pushes a lot of air and subsequently takes more effort. The lever is fairly easy to use, but it's a shame it doesn't protrude over the top of the fan housing, as it'd be much easier to adjust on the fly.

The riding experience of the Wattbike is very good. The fan gives good, progressive drag but it never feels choppy. The position, like a spin bike, is hugely adjustable making it a good fit for pretty much anyone. The wide saddle is a bit basic but easily replaced, likewise the chunky SPD/strap pedals, but even out of the box it's plenty comfy for an hour's hard graft. The LCD head unit is easy to read and the whole thing feels like a quality piece of kit; maybe not quite as durable as a top spin bike (the CycleOps 300PT for example) but plenty sturdy enough for gym use.

The fan won't simulate hard climbing so it's paired with a magnetic unit to ramp up the effort. You can get some serious out-of-the-saddle training with the climb dial set to seven, but it's not without its problems. Firstly the resistance curve is too steep: one through five don't do enough, it's hard to get exactly the feel you want out of six and seven. That job is made harder by the fact that the climb knob itself is pretty much impossible to adjust when you are riding the bike. It's badly placed and stiff, making on-the-fly adjustments a real faff. A redesign is needed there...

Wattbike make great play of the fact that the bikes are calibrated in the factory and that you can race against other users in real time or post your times for set distances on their site. The power is sampled via the cranks 100 times a second, meaning that previously unrecorded data is available to you. As well as standard power output, The Wattbike can show you the distribution of power over your pedal stroke, drawing it in a very nice visualisation as you go.

With practice it's possible to turn this graph, which is naturally a sort of skewed figure-of-eight, into a perfect circle, meaning that you're distributing your power equally on the down and up strokes. For the moment this poses as many questions as it answers. It's not really been possible to gather this data before outside of the lab, so I was at a bit of a loss to know what I should be aiming for; even the nice Wattbike people didn't really seem to know. I'd guess that different types of riding would require different power distributions for maximum efficiency, but the Wattbike defines 100% efficiency as the perfect circle.

As well as the power reading you can access a plethora of different measurements including cadence, speed, distance and heart rate (if you're wearing a compatible chest strap). Speed is a slightly odd one as it's nothing to do with the speed the fan wheel is turning but a direct calculation from your power input. This makes sense from the point of view that it allows direct comparison with another machine, either in the same place (racing leagues have already started) or on the Wattbike website's rankings for the standard events that are programmed into every unit. It's a bit odd when you're on your own, though: crank up the magnetic resistance and stomp up a climb on the pedals and you'll find yourself doing 50km/h, shut the fan and spin out on the flat and you'll only manage about 30.

The Wattbike software feels a bit like a work in progress. It's having to cope with masses of data and it manages that pretty well, but it doesn't feel as refined as other solutions such as CycleOps' PowerAgent or Tacx's Fortius. It's born out of the lab and you still feel you should be wearing a white coat while you look at it. That's not to say it doesn't work – it does – and it's offering extra data over other solutions, but you'll need to be sure you need it. British Cycling clearly think they do. Average Joe almost certainly doesn't, but if you're fighting a running battle at the top of your local ten rankings and you think you can eke out a bit more power by tweaking your pedal stroke, then the Wattbike is one to look at.

It's been difficult to come to an overall verdict for the Wattbike. It's clever, and great at gathering performance data, probably the best tool out there. The national team certainly seem to think so, and it's difficult to argue with an organisation that's currently so dominant.

The dilemma when evaluating its value to the rest of us is how far down the pyramid that extra functionality is going to make a difference. Leisure riders, sportive racers and even decent TTers are unlikely to benefit much. If you're at the top of your game, and you're into the maths of performance, it's definitely worth a look. If you're not and you really want to spend £1700, you might be better off spending it on the CycleOps 300PT which I think is the probably the best made spin bike you can buy, with the most usable software.

For the moneyed trier who just wants to exercise at home and isn't going to break any records – local or national – it's hard to see past VR machines like the Fortius and the Elite Real Tour. Even with a dedicated computer – even with a dedicated bike – you won't be spending Wattbike money. 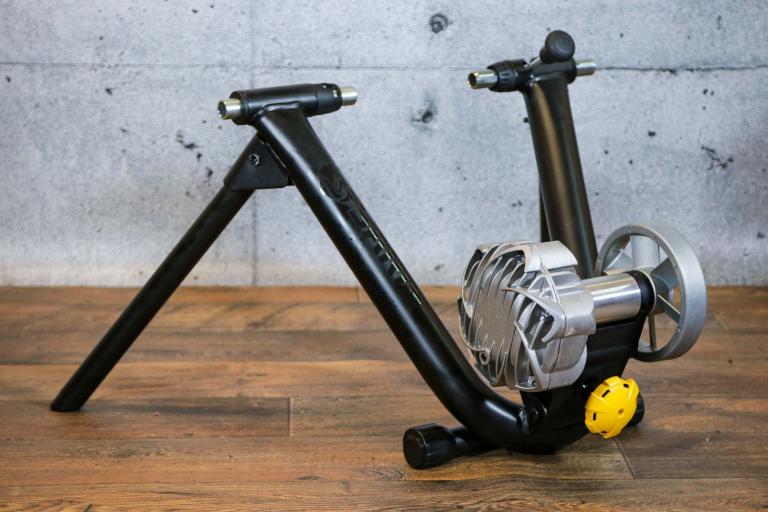 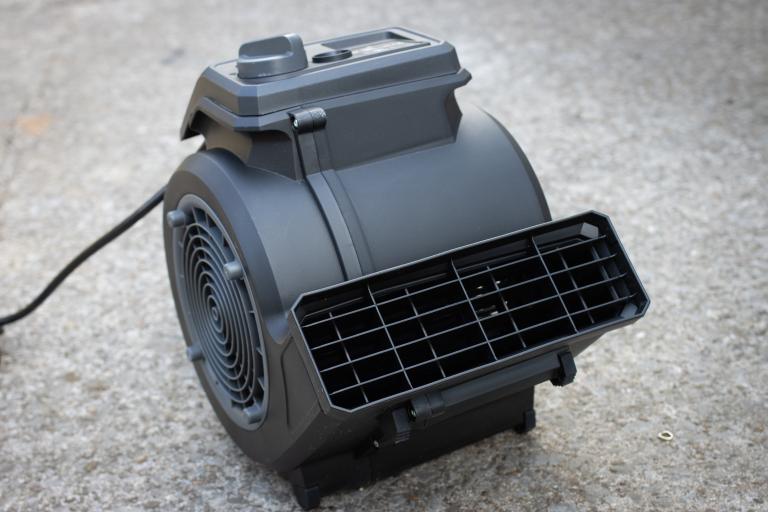 Want to blow masses of air in your face? Look no further 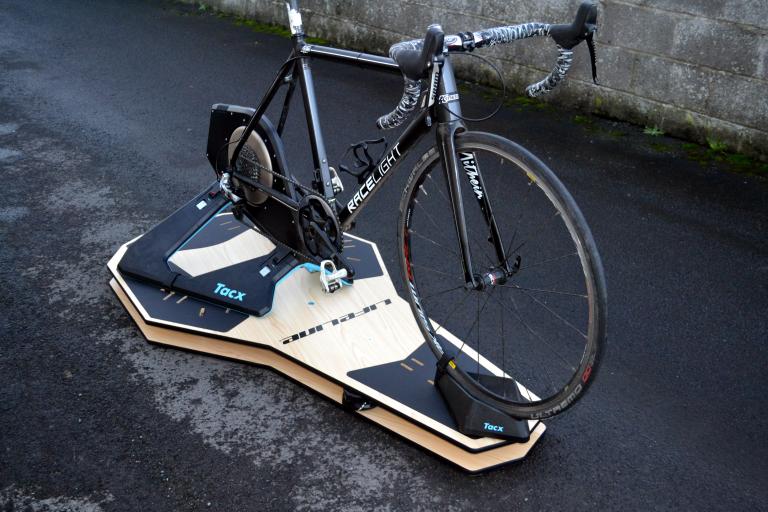 Adds an extra dimension and increases comfort for indoor riding 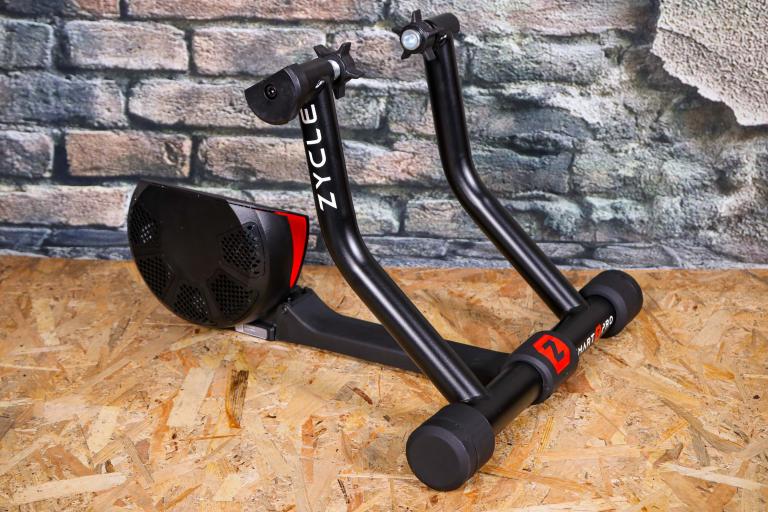