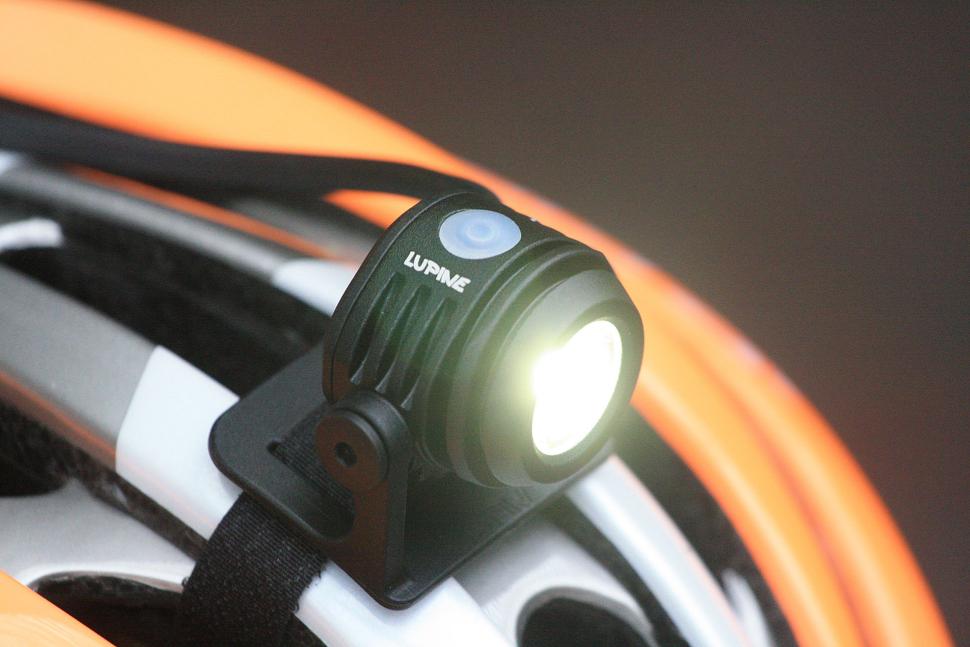 8
10
Beautifully made with ample scope for light trail duties but would benefit from improved switch and intellige
Weight:
185g
Contact:
leveretproductions.com
How we test

The Lupine Neo 2 helmet light is a lightweight mid-power unit with stereotypically Germanic build quality. Those seeking to hammer along singletrack at warp speeds will find it slightly underpowered. However, road riders enjoying the odd bit of dirt in their diet will appreciate the choice of settings and relatively generous run times.

Good engineering not only means high quality materials but user-friendliness. The matchbox shaped lithium polymer battery has been developed to piggy back on the helmet. This overcomes the problem of it bouncing around in a jersey pocket, while in theory distributing weight evenly across a helmets' surface.

Both tether convincingly atop road, trail and commuter style models courtesy of sculpted, adjustable resin mount and high quality Velcro straps. 185g is pretty favourable, albeit heavier than resin types and initially quite obvious aboard 230g helmets. However, the extension cable allows easy tenure in jerseys or luggage.

The headlamp sports a beautifully machined, shot peened and hard anodized aluminium shell, weather proof to IPX68. This protects its Cree XM-L2 diode and switchgear from hell and indeed high water. Or at least dust, dirt/ingress and submersion to two metres.

Operating temperatures range between minus 28 and plus 70 degrees, which might be a consideration during Canadian or Eastern European winters but unchallenged in these shores. Thankfully, both lens and shell remain temperate to touch, irrespective of run time.

Time was when helmet lamps had three modes: full blast, dipped and off. The Neo 2 features various menu settings; default is medium, high and low, pressing the firm, top mounted switch for several seconds until it emits a slow pulse with red centre spot unlocks the menu and a further four modes.

These include a town-friendly 140 lumens, a gentler camping mode, another for reading and two SOS. Customising such isn't difficult but requires practice, preferably in the comfort of home.

The switch itself is very positive, although its flat profile is difficult to locate, even in relatively thin full-finger gloves. This also became easier with practice, although I resigned myself to using the 240 lumens, rather than foraging for 140 or SOS when entering built-up areas.

The flood beams sweep a huge surface area with some trade-off in precision, so legal requirements for bike mounted lights aside, you'll still require a bar mounted spot for serious speed. With the full 700 lumens on tap, I had a clear view of conditions thirty feet away, falling to twenty in heavy rain.

My Univega sports an 800 lumen headlamp fuelled by 6 volt dynohub, which is fairly capable through woodland trails, even at slower speeds. The Neo 2's flood becomes slightly brighter towards the centre. That makes it superior to many lumen-laden budget models, which sometimes combine a fierce spot with insipid flood, so we could hustle along at around 18mph with ample warning of tree roots and other hazards.

Re-joining metalled roads, I tended to nudge down to the 400 lumen setting but though powerful, the 700 doesn't roast retinas or court driver contempt. Since the beam follows your gaze, it's possible to spot and skirt potholes at a split second's notice.

This is another blessing at concealed, unlit junctions. Glancing left to right in the upper modes caused advancing traffic to slow, enabling swift, safe getaways. These settings are reckoned to run for 2 hours 15 minutes and 4 hours 30 minutes, which is pretty impressive from a 2-hour charge.

Ours actually bettered this by ten minutes in the highest setting, whereas the lower town-friendly two settings manage 6 hours 27 minutes and 14 hours 4 minutes. The latter ample for a fortnight's middle distance commuting and is handy when reading computers, heart rate monitors or tackling roadside mechanicals.

Both SOS modes will creep tantalisingly close to fifty hours, which should be ample for most emergencies and visible to a good 500 metres. The ability to rotate the lamp's direction also avoids that age old bug bear of being dazzled by your own light.

Although the system begins periodic blinking when reserves dwindle this only became apparent 15 minutes before powering down; an intelligent kick-down would be nice.

8: Beautifully made helmet lamp with ample scope for light trail duties but would benefit from improved switch and intellige

"During the developement of Neo, the focus was set to the special needs of a helmet light. The robust, waterproof and only 50g light aluminium housing has a low center of gravity, close to the helmet so you hardly can feel the weight on your helmet.

With the adjustable dimlevels you can customize the Neo to your needs. You have the choice between five different lighting modes". Essentially the Lupine Neo 2 is a high quality helmet light capable of producing 700 lumens in its highest setting, with a much wider range than typical of this genre, which lends it better than most to road duties. However, it's a little underpowered for serious trail antics and though genuinely excellent, faces stiff competition from even smaller but similarly mighty designs.

In our Neo the latest generation CREE XM-L2 Chip emits a luminous power of 700 Lumes which offers a beam distance of 120 meters.

The beam pattern of Neo ensures an excellent illumination in the close range but a far reach for faster rides too.

During the developement of Neo, the focus was set to the special needs of a helmet light. The robust, waterproof and only 50g light aluminium housing has a low center of gravity, close to the helmet so you hardly can feel the weight on your helmet.

With the adjustable dimlevels you can customize the Neo to your needs. You have the choice between five different lighting modes.

By default, the Neo operates in the 3-step mode, but you can choose a 2-step, 4-step mode too. Additionally there is an Alpine SOS and SOS available.

The 120g low weight Li-Ion battery supplies enough energy for up to seven nights. The battery can be mounted directly to the helmet or you can carry it with the included extension cable in a bag or jersey pocket.

Generally very user friendly. However, the switch is difficult to locate and engage, especially in gloved hands and while riding.

Very impressive but then again; no less than I would expect from a unit meeting IPX68

Relatively quick charging and run times are genuinely very faithful to those quoted. However, I was slightly disappointed by the short notice period before it shut down.

Build quality is superb in the main and the unit should last many years with basic care.

Overall, I've been very impressed with the Neo 2's standard of output and general performance. Sure, there are more powerful systems around and serious trail junkies may find it slightly under-powered. However, its 700 lumens are very intelligently deployed-great for pitch black roads with some forest frolics thrown in for good measure. Selection of lower settings and reasonable run times means its practical sub/urban commuting too.

Build quality, intelligent output, gets warm, yet remains temperate to touch, even after a couple of hours in its highest setting.

Doesn't give much warning when reserves reach a critical point and the switch's low profile made engagement tricky in some contexts.

Would you recommend the light to a friend? Yes, for road duties with some forest frolics thrown in but hard core mountain bikers may find it slightly under powered.