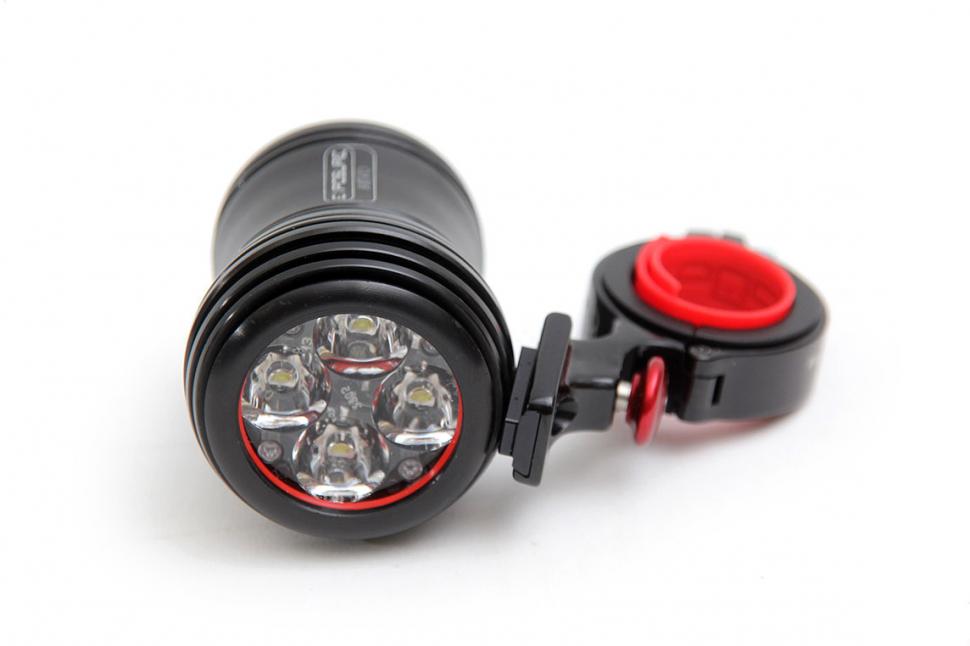 7
10
Very good light, but limited mounting options and not optimised for USB charging
Weight:
113g
Contact:
www.use1.com
How we test

The Revo dynamo light caused quite a bit of excitement when Exposure announced it and their reputation for top quality lights meant that it came loaded down with a fair amount of expectation. It doesn't exactly disappoint - it's a damn good light - but if I were spending my own money I'd hold out for an improved Mk2 version.

The Revo comes in a cut-down version of Exposure's trademark black aluminium casing. There's no need for a honking great battery, so it's a stubby and lightweight unit that looks tidy, robust and immune to casual damage. It also weighs a teeny 110g, although you also have to factor in the weight (and expense) of a dynamo. Up front we have four LEDs (Cree XPG R5s) and out back there are two well sealed gold plated ports, one in, one out. I'll come to that 'out' port later.

Exposure's website suggests that the Revo is pretty versatile. I used it for audaxing but it has enough kick to be useful, if not ideal, for off-roading.

The beam isn't optimised for road riding (yes, yes, German lights are) but neither is it an offensive and silly wide-angle blast. I had no worries about blinding on-coming traffic and didn't get any complaints during the test period.

The beam gives plenty of reach for fast descents with enough peripheral coverage to warn you of overhanging branches and nervous verge lurking badgers.

Exposure claim 800 lumens for the Revo. We all know by now that light measurements are hard to verify in the real world and 800 lumens feels positively modest these days, but I never felt that I could do with more light and compared to other dynamo powered lights the Revo kicks out a healthy whack of usable illumination.

I used the Revo on London-Edinburgh-London (paired with an SP-PV8 dynamo) and when I think of the output (and lack of solid reliability) of the dynamo lights that I remember using as a kid it's like having a small, friendly star bolted to your handlebars. You do have to get used to kind people telling you that 'your light's on mate' as there is no off switch, unless you pull the lead out.

The light kicks into action pretty much as soon as you start turning the pedals – no nervous moments waiting for it to flicker into life – and builds in intensity until you get to about 15mph. Slow down and you will notice it dimming slightly, but even when grovelling uphill at not much more than brisk walking pace you still get enough light to ride by comfortably.

Standlight time (with just two LEDs lit) is a useful 10 minutes, but I've noticed that the LEDs stay lit for way longer. In fact one of the riders on an audax I was helping at rode in, parked up, ate, slept for a few hours and left before the LEDs on his Revo had completely dimmed.

So far, so good. It's sturdy, bright and reliable but I would still hesitate before buying one and it's only getting 7/10 rather than a 9. Why? Well, it comes down to potential use.

Modern dynamos are superb and kick out a steady supply of power that, in daylight, goes to waste. The Revo comes with an output socket and Exposure sell a Boost cable which can be connected to their lights and used to charge the various devices that we're all slave to these days.

To be fair to Exposure they don't make a big noise about being able to charge up devices through the Revo but they did confirm that it should be able to trickle charge a GPS unit. I don't use GPS but I do have a tablet and the Revo didn't increase the battery charge at all. I'll take Exposure at their word, but if USB charging is important to you then it's worth asking around to see if it will work for your electronic gadget of choice.

It might seem harsh to pick on this, but the latest generation of dynamo powered lights (like B&M's Lumotec IQ2 Luxos, which is half the price) have USB charging as a built in feature. The Revo may be better made and kick out more light but it seems a little crude by comparison.

That said, I've just taken delivery of a Luxos U and although the Revo is much less sophisticated, it's easier to set up and operate, which could be seen as a bonus if you just want something that you can effectively fit and forget.

The other thing that niggled was the mount. It's the standard mount that Exposure use for all their lights, which is very good, but doesn't allow for mounting on the fork crown. It's only a minor detail, but handlebar mounting takes up extra space and makes it harder to use a bar bag.

Exposure specialise in performance lights, so fretting over the needs of beardy tourists and audaxers probably isn't top of their To-Do list, but with a few improvements this could be the absolute top of the class.

Very good light, but limited mounting options and not optimised for USB charging

Exposure claim it's suitable for mountain biking, commuting and road use.

"This compact dynamo powered light offers an 800 lumen output with the burntime only limited by rider endurance. If you keep pedalling the light keeps shining bright.

With Stand Light Technology, when you stop riding the light dims slightly but remains lit for 10 minutes. It ensures you will still be seen when stopped at junctions. It bounces straight back to full output after a couple of peddle revolutions. There is up to an hour of light produced after this to help with all post ride activities.

800 lumens is good but not startling these days, so it's worth reminding yourself that it's all coming for free, courtesy of your legs. It's certainly plenty for what I used it for, eg overnight audaxes.

The lamp weighs bugger-all compared to Exposure's other offerings, some of which could be used to bludgeon a small horse. Don't forget to factor in the weight of the dynamo though.

Value depends on what you want from this light. For output and build quality it's top notch. However, limited USB charging may put some people off, especially given that the B&M Lumotec IQ2 Luxos U has proper USB charging and is half the price of the Revo.

Very good, although I'd like to see proper USB charging as standard on a new(ish) dynamo light.

Lack of useful USB charging and limited mounting options. Beam pattern isn't optimised for road use, but it's not really an issue here.

Would you consider buying the product? Maybe, depending on what my needs were.

Would you recommend the product to a friend? Perhaps.

With some improvements this would be a superb light for commuters, tourists and audaxers.