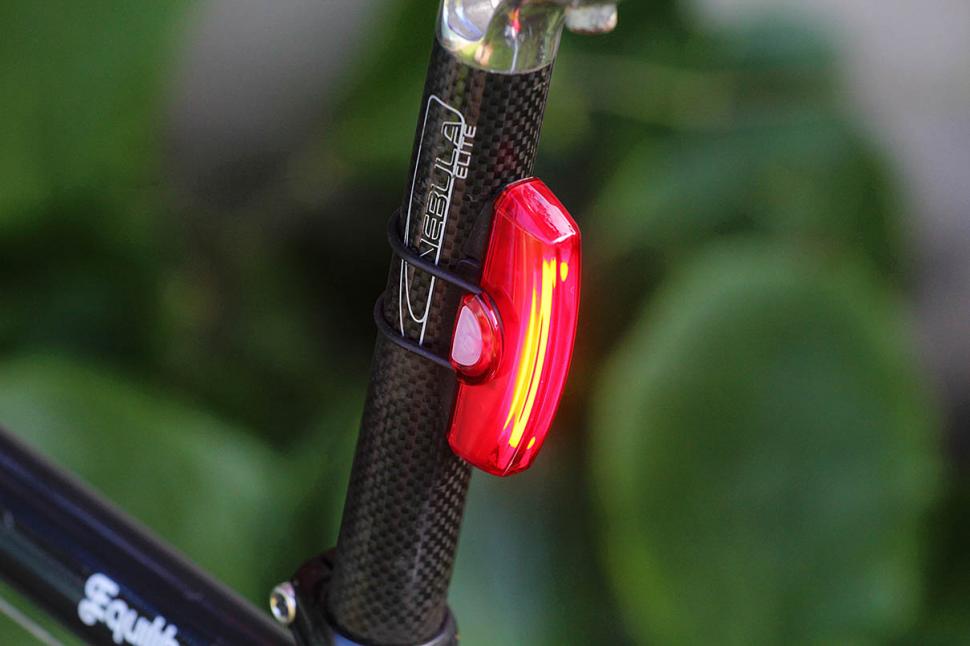 The Rapid X is a new light for Cateye. They have a pretty big range of front and rear lights and plus an enviable reputation for making things that work well and last a reasonably long time.

Taking the Rapid X out of its packaging, the first thing you're struck by is how ridiculously light it is. Weighing only 24g it's the lightest rear light I've ever used. That said, I've never found myself having to get off and walk through being overly burdened by my rear light.

Most Cateye lights use the tool-free Flextight fitting also found on their cycle computers, but the Rapid X makes do with an even simpler O-ring to hold it to your seat tube. Two sizes of O-ring are supplied meaning that you can use the smaller one to fix the light to your seat-stays or even rack should you want to. As it is so light, I found it stays very well in place over any terrain, whether mounted to seat-tube or stays.

The LED here is an interesting one - it appears as a constant strip of light rather than discreet lights. I can't tell you if this is a new type of LED (although Cateye do claim it has 'the very latest in battery and LED technology') or simply clever optics, but it does look nice. It reminds me a bit of the lights on the back of recent BMWs. It also has exceptional all-around visibility; the light-strip is equally visible from the side as the rear.

There are the usual choice of constant and flashing modes plus a rather attractive 'pulse'. As is generally the case, your choice of mode has a major effect on battery life. According to the manual, this ranges between 1 hour on constant to 30 hours on flashing. Having a mode which only lasts 1 hour from full charge seems pretty daft to me, and I've been trying to avoid accidentally using it for fear of draining the battery before I get home. Certainly on the lower power levels or flashing it lasts for ages.

In terms of absolute brightness, this is plenty bright but not the brightest I've used. I've been using an Exposure Flare for the last year or so, which has a notably brighter beam than the Rapid X but is also much more directional. I'd choose wide visibility over a super-bright rearward beam for most of the riding I do, with dual-carriageways being the exception.

The battery is sealed inside the Rapid X and recharged via a micro-USB connector, which is hidden underneath a rubber skirt that sits between the light and whatever you're attaching it to. I was a little dubious about the waterproofness of this arrangement (as the rubber easily comes off the light when it's not fixed to a seatpost) but it's survived rain and some generous hosings-down without an issue.

Plugging the now-universal micro-USB charger cable is definitely less fiddly than having to remove and charge batteries, but obviously you can't carry a replacement battery. However, with battery life upwards of 24 hours on flash mode, most users should find that this is more than enough.

In terms of operation, the light is switched on and off with a long press on the rubberised button; the same button is then used to cycle through the modes. I had no issues with it switching on accidentally when kicking around in a bag, but the rubber 'skirt' did tend to come off and get lost in the depths sometimes.

So, let's talk price. Personally, I think that forty quid is a lot to spend on a rear light. Yeah, you can spend more, quite a lot more as it turns out, but you can also buy a perfectly decent light for half the price of this one. Most such lights will run on AAA batteries; USB-rechargable lights tend to be a bit more, but do save the on-going cost of buying batteries. The rechargable (and very bright) Knog Blinder 4V is a fiver less. An Exposure Flare is cheaper although not once you've added a spare battery and charger.

Dave recently reviewed the Topeak RedLite Aero which looks at first glance quite similar to the Rapid X, but has three conventional LEDs and runs on an AAA battery. It's also quite a lot cheaper.

Compact, lightweight, rechargeable rear light with excellent all-round visibility, but there are rather cheaper options out there.

The New Cateye Rapid X Rear USB Rechargeable LED Light uses the very latest in battery and LED technology to amazing effect. The Rapid X may look like a normal Cateye light but this neat compact rear light offers a level of light intensity like no other Cateye. It is visible from nearly 360 degrees and using a neat band fitting system it can be placed in several different positions on the bike, from seat post to seat stays. It uses a Li-Polymer Battery that is USB rechargeable to power the Ultra Bright Strip LED Technology. With 5 modes, Constant, Flashing, Rapid, Pulse and Vibration there is a mode for every occasion.

Lightweight and fairly simple construction. I found the rubber "skirt" tended to detach itself from the light - it would be nice if this was permanently attached rather than just pushed on. No issues with the o-ring coming off.

Works well, nice to be able to fit to any seat post and racks/stays via the choice of 2 o-rings. Does seem a bit cheap for a £40 light though.

No issues during the testing phase but I'd be a bit concerned about the long-term sealing of the USB charging port.

Choose the right mode and it lasts for ages. Choose the wrong one and you might not make it home.

Decent brightness, but the standout feature of this light is the angle of visibility which is the best of any rear light I've used.

Great side visibility. Easy to use, neat and lightweight.

I wish the rubber skirt was permanently fixed to the light and hence wouldn't fall off in a bag.

Would you consider buying the light? In the January sales, perhaps. Probably not at full price. 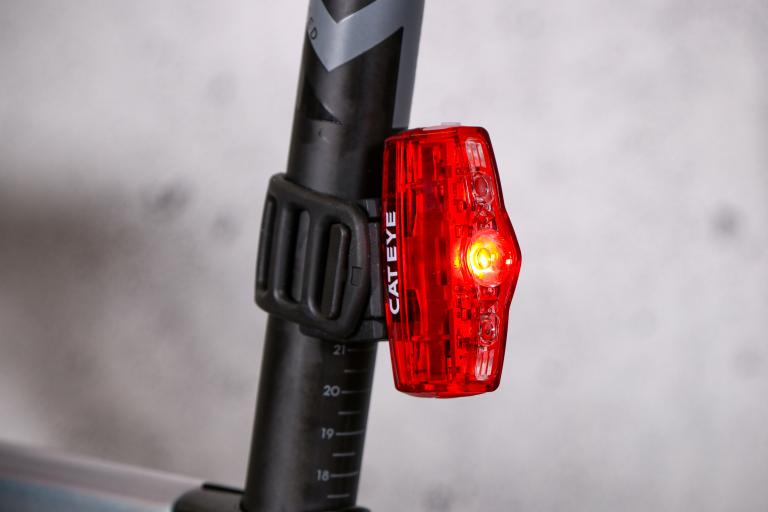 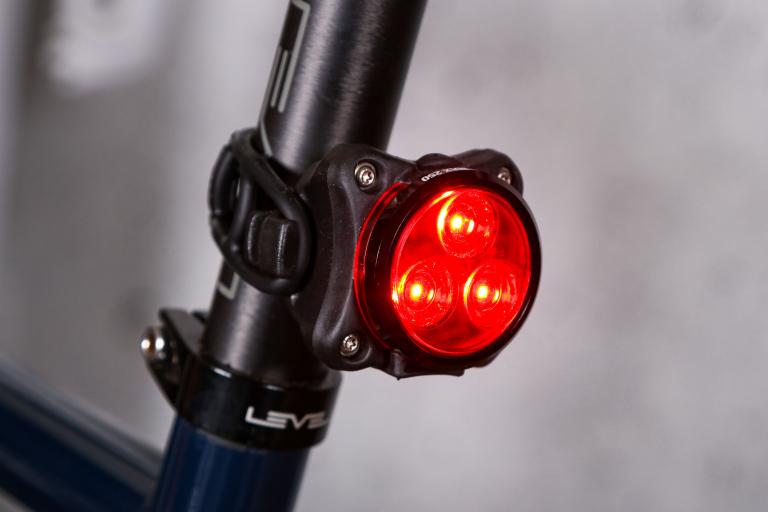 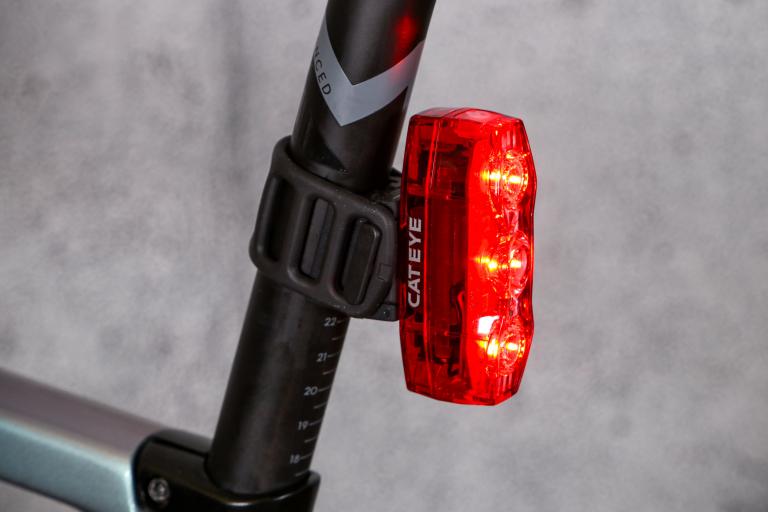 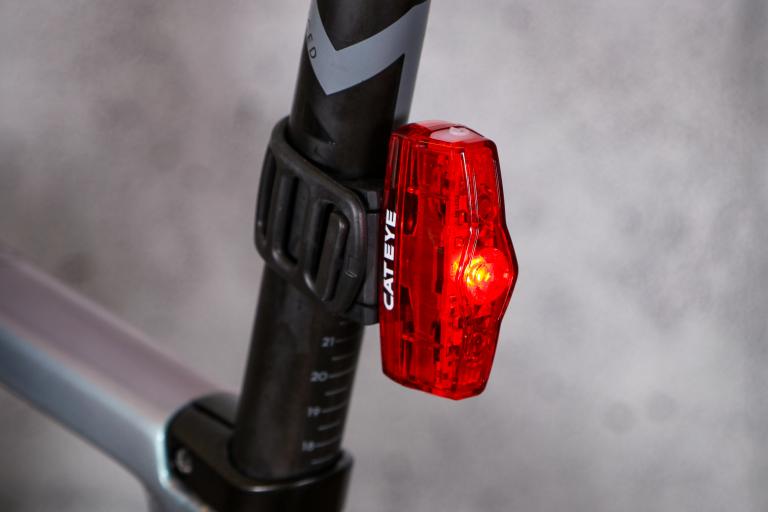