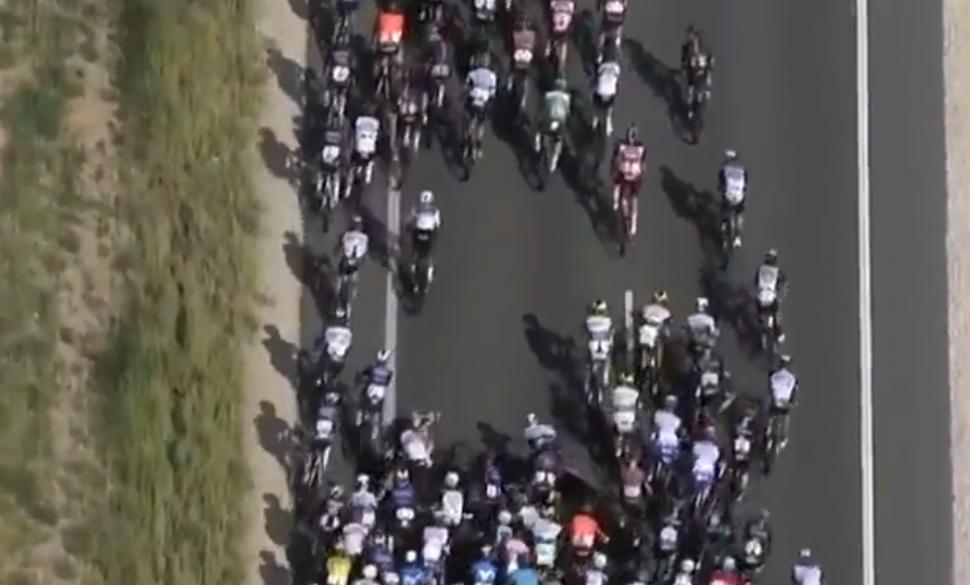 Jasper Philipsen of Alpecin-Fenix has won Stage 5 of the Vuelta a Espana, his second victory of the race, on a day when a massive crash split the field with 12km remaining of the 184.4km stage from Tarancon to Albacete.

Among the riders caught up in the crash was race leader Rein Taaramae of Intermarche-Wanty-Gobert, with the red jersey passing to Kenny Elissonde of Trek-Segafredo, who came home in the front group.

Philipsen takes over the leadership of the points classification ahead of yesterday's stage winner Fabio Jakobsen of Deceuninck-Quick Step. who was second today,

With 11.7km to go, a 𝐇𝐔𝐆𝐄 crash takes place involving most of the field.

It makes it even more beautiful if you see the final five kilometres how we were there together all with the team. I cannot describe that," said the Belgian, who also took the green jersey as the points leader.

This team, we haven't been riding so long together but it's incredible what we all do for each other, and I think it's so beautiful to finish it off together.

After yesterday I was a bit disappointed that I couldn't do my sprint how I wanted but to win today is super nice to turn a page from yesterday and enjoy this moment together with the team.

This is not the way I wanted to take the jersey but we know in cycling when there is wind, there is risk. 25 seconds, you can lose it with an echelon also, so you had to be vigilant. OK, I don’t like it, it was not a pleasure, but at the end of the day, I cannot do anything else. It’s how it is. I’m a bit sorry for him [Taaramae], he’s a really nice guy, but that’s cycling.

It was very nervous today with the possibility of echelons. You never want crashes, but we all knew there was a possibility of splits today, so we were all vigilant. I would have preferred to have taken the jersey à la pédale rather than because of someone else’s misfortune, but I just did my own race.

A crash happened in front of me when I was in the first half of the peloton. I managed to avoid it, but riders behind me ran into me.

I wanted to be back in the saddle as soon as possible, but it took ages before I could free myself from the tangled riders. Once everybody was upright, I changed bikes and started to chase the peloton. It was impossible to close the 1 minute gap.

It is a pity to loose the jersey in this way, but it is part of the race. Luckily, I’m not badly injured. Yesterday I crashed in the final 3 kilometres and today I was less lucky.

But I’m not sad. I prefer to keep a smile on my face and think about my stage victory and those two magical days in red. I’ve got the mountains jersey on my shoulders now, which might become a goal in the next weeks. Or trying to win another stage.