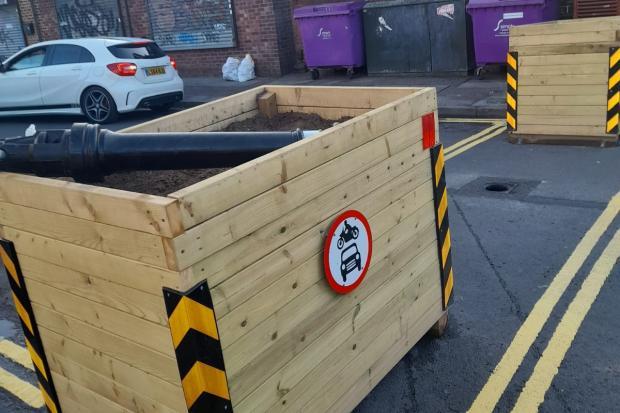 Bollards have been removed and planters vandalised less than 24 hours after a six-month Low Traffic Neighbourhood trial was introduced in parts of east Oxford.

From today (20 May 2022), the Highways Authority, @OxfordshireCC is trialling three low traffic neighbourhoods (LTNs) in Oxford, which cover the Divinity Road, St Clement’s, and St Mary’s areas and as part of an experimental traffic regulation order (ETRO).

However, the six-month trial, approved by Oxfordshire County Council in December, has been the subject of protests by opponents of the traffic reducing measures and, like a similar scheme in the Cowley area of the city, has already been vandalised.

According to the Labour councillor for Iffley Fields & St Mary’s, Damian Haywood, half of the bollards blocking vehicles from entering the selected areas have been ripped out since the LTNs were finished on Friday, while residents have used power tools in an attempt to remove the planters.

Amir Steve Ali, a vocal opponent of the LTNs who stood as an independent candidate for St Clement’s at the recent local elections, posted a photo of a bollard that had been ripped out on the Cowley Road and placed in one of the planters.

Disgusting behaviour. It's organised behaviour being stoked up on FB.

Funny how in Brighton when someone painted white lines on the road after a cycle lane was removed the same type of people were up in arms and demanded police action and it was called utter vandalism. pic.twitter.com/znnxWf9HPl

On an anti-LTN Facebook page, the group’s moderator commented under the photo: “More to come hopefully, hopefully it will the trend to how many can be knocked down or set on fire”.

“People are angry,” Ali said. “The only time people get angry is when people feel there is an injustice that has been done to them.

“People feel like they have no choice but to take action into their own hands. The traffic situation is a total nightmare at the moment.”

Journalist Neil Clark, who has also publicly voiced his opposition to what he calls the “anti-car movement”, praised the vandals for “taking [the] law into [their] own hands” during what he described as a “civil war” between the council and local residents.

However, Labour councillor Haywood, who has faced opposition from within his own party over the proposed LTNs, tweeted his frustration at the attempt to destroy the scheme.

“I am absolutely fed up with a culture that demands we drive everywhere and encourages vandalism to maintain this,” he wrote.

This latest act of vandalism against LTNs in Oxford comes just over two months after a bollard at the Temple Road LTN, in Cowley, was rammed off the road less than a day after it was replaced due to earlier vandalism.

A decision on the future of the LTNs in Church Cowley, Temple Cowley and Florence Park, established in March 2021, is due in July.

Howard Street looking glorious this morning. Spoke to an excited resident who described it as ‘blissful’. pic.twitter.com/bHD0BpopP1

Despite the vocal opposition to the schemes in Oxford, many residents have demonstrated their support for the recently installed LTNs.

Green Party councillor Emily Kerr tweeted yesterday that residents have put the vast majority of bollards back in place and repaired the vandalised planters.

We have fixed the Howard street planter that someone tried to take apart overnight. And will do so every day if necessary. Give the trial a chance. Not cool. pic.twitter.com/48D5qfEVcP

Kerr also tweeted this morning that she “spoke to a resident in the new East Oxford LTN last night.

“He said that he’d slept properly for the first time, without being woken up in the middle of the night by speeding cars zooming past. This is a benefit which hadn’t even occurred to me before.”

A resident who lives on one of the Temple Cowley LTNs told the Oxford Mail: “I think it’s quite brave of the council.

“Something has to change and it’s always a difficult thing. It’s made a huge difference where I live on Oxford Road.

“It’s much safer for children playing, and so many more people are cycling.”

Here’s the ‘gridlock’ on Cowley Road on the afternoon of the second day of the new #LTNs in Oxford… pic.twitter.com/5Mry9zKq6I

Oh go on then, one more photo cause the #ltn filters are looking 👌🚴💙

Did you know:
Initial evidence from LTNs in Oxford: