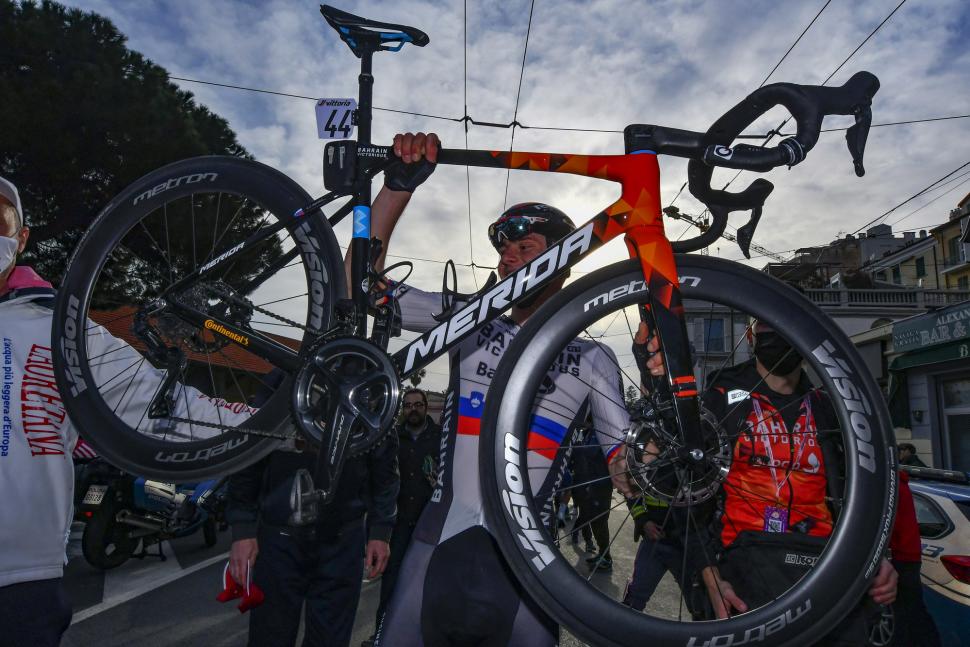 It’s not often that a single component gets as much attention as the winner of a Monument – but that’s exactly what the Bahrain Victorious rider Matej Mohorič managed yesterday as his use of a dropper post helped him draw clear of his rivals on the descent of the Poggio to take a thrilling victory at Milan-San Remo, and this morning the UCI has confirmed that its usage on a road bike is allowed, so long as it complies with saddle setback rules.

Despite almost crashing twice on the descent, the Slovenian national champion, one of the best descenders in the peloton, held off his pursuers to win the race by just two seconds from Anthony Turgis of Total Energies, with Alpecin-Fenicx’s Mathieu van der Poel third.

Following the race, there was plenty of buzz about the dropper post Mohorič had used on his bike – a Merida Scultura, the round seatpost of which was able to accommodate the dropper post, rather than the Slovenian’s usual Merida Reacto, which has an aero seat post.

The UCI Equipment Commission approved the use of dropper seatposts in road cycling competitions in 2014. Their use is subject to the minimum 5cm setback rule of article 1.3.013 of the UCI Regulations, i.e., when the dropper seatpost is set to its highest or lowest setting, the saddle setback must be in full compliance with article 1.3.013.

That article of the UCI regulations states:

The peak [ie the front] of the saddle shall be a minimum of 5cm to the rear of a vertical plane passing through the bottom bracket spindle.

While Bahrain Victorious usually use FSA components on their bikes, the dropper post used by Mohorič yesterday is reported by cyclingnews.com to be a Fox Transfer SL. “Due to the UCI rules we had to use a dropper that was on the market and so went for a MTB model,” Mohorič explained.

“We tested a 12cm dropper but that was too much and meant the pedalling wasn’t efficient anymore, so we opted for a 6cm device,” he continued.

“I had a grip shift on the bars and lowered and lifted it several times on the descent of the Poggio.

“People have long dismissed the idea of using dropper posts but the technology is more advanced now and they don’t weigh much more than a regular seatpost.

“Maybe next year all the bikes will be available with a dropper. It’s safe in traffic too and so in training. You can brake better. I think it’s a big advantage in racing too,” he added.

However, a tweet from the team yesterday evening suggested that the dropper post was indeed made by FSA, and we are seeking clarification on this point..

If you wonder about that #dropperpost that @matmohoric rode to the win at today's #MSR2022: Yes, it's approved by @UCI_cycling and it's made by team sponsor @YourFSA who will be mighty proud and celebrating now - as we do at @MeridaBikes! https://t.co/rVcW0jpjAP

Fellow Slovenian Tadej Pogačar of UAE Team Emirates winner earlier this month of Strade Bianche and Tirreno-Adriatico, entered the race as one of the two big favourites together with 2020 winner Wout van Aert of Jumbo-Visma.

Pogačar, who had attacked repeatedly on the Poggio after his team mates had earlier set a cracking pace on the Cipressa, revealed after yesterday’s race that Mohorič had told him of his race plan ahead of the start.

Congratulating the Bahrain Victorious rider on his win, he said: “Before the race, he told me not to try to follow him downhill and I replied that I was aware that it would be very difficult to follow him, since I know that he is crazy when the road goes down and also having noticed that he had a seat post dropper to launch even better.

“In fact, when he overtook me downhill, I saw that he was already taking big risks, drifting and even coming off the road, so I didn’t dare follow him.”