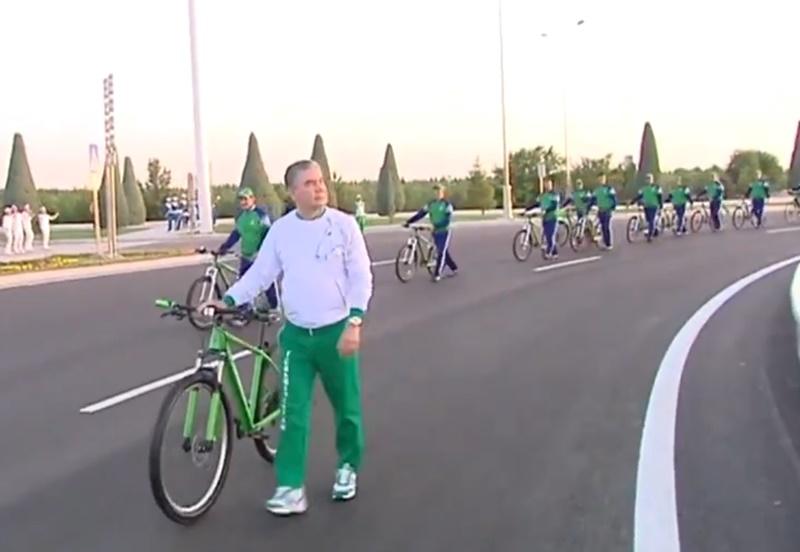 The UCI has defended awarding the president of Turkmenistan, Gurbanguly Berdimuhamedov, its highest distinction, arguing that the much-criticised dictator has shown, “a particular commitment to cycling.”

Human rights groups say Turkmenistan is one of the world's most repressive regimes, but President Berdimuhamedov does indeed appear to be a fan of cycling.

In 2013, he ordered all citizens to buy bikes in preparation for a mass event and everyone was expected to ride bikes en masse for the whole of that September.

Turkmenistan's president loves cycling ("velosport"), he bloody loves it. Here he is walking around a giant monument erected to cycling as a song about cycling is performed in the background pic.twitter.com/3EjmaZgJz7

It’s fair to say that Berdimuhamedov is a controversial recipient of what the organisation itself says is, “the highest UCI award.”

Human Rights Watch says that all aspects of Turkmenistan public life are controlled by the president.

It adds that, “All forms of religious and political expression not approved by the government are brutally punished. Access to information is strictly controlled, and no independent monitoring groups are allowed. Dozens of victims of enforced disappearance allegedly are in Turkmen prisons.”

A UCI spokesperson told insidethegames.biz: "Turkmenistan was behind the United Nations’ creation of the annual World Bicycle Day, which celebrated its third edition on June 3.

"The UCI presented an award to the President of Turkmenistan Gurbanguly Berdimuhamedov in recognition of his country’s commitment to our sport through world-class competitions, mass participation events and the promotion of cycling for all.

"The UCI Order is the highest distinction awarded by the UCI. It is in principle reserved for political personalities who have shown a particular commitment to cycling.

"Several leaders have been awarded the UCI Order since its creation in 2004."

The 2021 World Track Cycling Championships is set to take place in the Turkmenistan capital, Ashgabat.

The UCI spokesperson said it aimed for events to reflect the geographic diversity of its 196 National Federations.

“The 2021 edition of the UCI Track Cycling World Championships in Turkmenistan’s capital, on the ultra-modern Velodrome at the Ashgabat Sports Complex, which was inaugurated in 2017, is part of the long tradition of the Worlds organised outside Europe.”