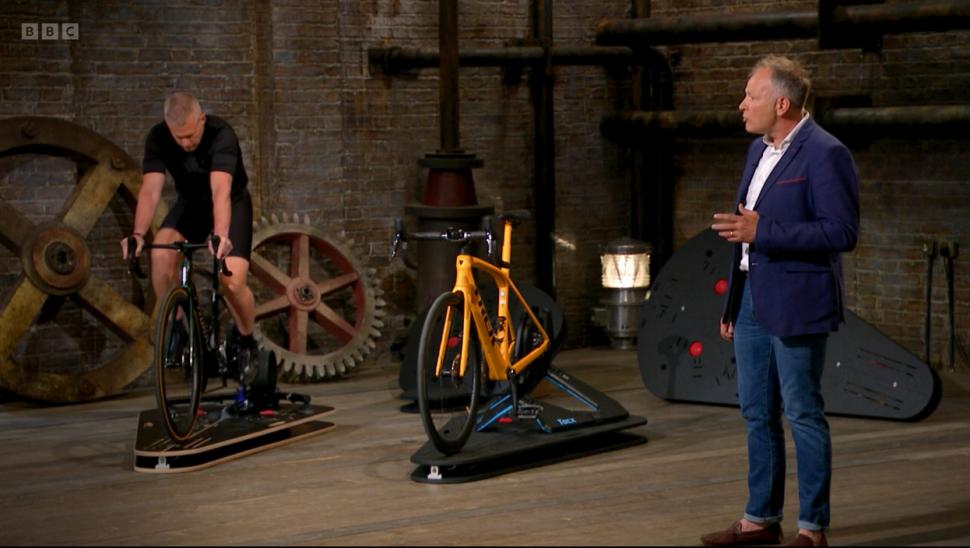 Founded by Steven Murr in 2019, TurboRocks produces rocker plates, which are designed to add realism and comfort to indoor riding.

By setting your indoor trainer on it, a rocker plate allows your bike to, predictably, rock from side to side, mimicking the swaying motion that you experience when you are riding out on the road. This side-to-side movement is achieved through inflatable balls that can be adjusted for rider weight and preferences.

While they might not totally mimic real riding, rocker plates do add an extra dimension to indoor training and can make longer spells in the saddle more comfortable.

In November we gave TurboRock’s flagship model, the Realplate React Stealth, a four-star review, with our tester finding that while “it might not fully replicate riding outdoors, the Realplate React improves comfort to the point that I do not want to go back to riding indoors on a flat surface. If you train indoors a lot, the high cost involved will be well worth the outlay.”

Appearing on last night’s episode of the BBC’s business reality show Dragons’ Den, Steven Murr told the panel of entrepreneurs – the eponymous dragons – that his business had grown by 670 percent over the last year, selling over a thousand units worldwide. He called on the potential investors to “join me and rock all over the world” by investing £80,000 for a five percent share in the company.

The TurboRocks founder said that he was seeking the further investment to help with international shipping and distribution costs.

Aside from a few minor hiccups – including calling Deborah Meaden ‘Deb’, much to her annoyance, and new dragon Steven Bartlett claiming he preferred the stability of his Peloton after testing out the rocker plate – the pitch went as smoothly as the side-to-side motion of one of Murr’s plates.

Murr told the investors that most of his products were sold through the company’s website, and that the Realplate React Stealth – the most expensive model, valued at £449 – can be produced for £141, and built in his garden shed.

Despite the company making a net profit of £135,000 last year, Murr admitted that he still worked three days a week in the local bike shop, which led Bartlett and Meaden to question his dedication to growing the business.

Nevertheless, both Crafter’s Companion founder Sara Davies and Touker Suleyman, who owns a stake in the online cycling marketplace Bikesoup, were keen to invest in TurboRocks, allowing Murr to negotiate a double deal worth £80,000 in exchange for a 20 percent share in the business for each entrepreneur.

He said afterwards: “I can’t believe it, I didn’t see that coming at all. They were all dropping like flies, and all of a sudden two brilliant dragons together – it’s absolutely like a dream team, I can’t believe it.”