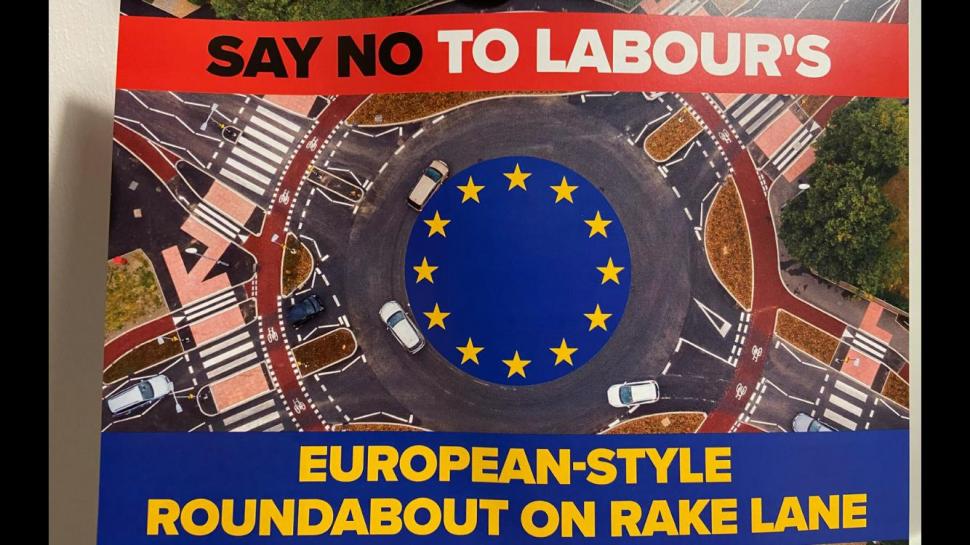 A Conservative campaigner has been criticised for promoting “anti-cyclist” and “jingoistic” sentiments after he published a leaflet opposing the construction of what he termed a “European-style” roundabout at Rake Lane, North Tyneside.

Olly Scargill, who based his campaign for election to the South Jesmond ward last year on climate change and reducing pollution levels in the area, claimed that the Labour-controlled council planned to use Rake Lane “as a guinea pig for a European-style roundabout, which would give priority to cyclists.”

To illustrate his point Scargill’s leaflet featured an image of what appears to be Cambridge’s Fendon Road roundabout, which opened in 2020, with the flag of the European Union photoshopped in the middle.

The roundabout at Rake Lane will be the north-east’s first Dutch-style roundabout and forms part of North Tyneside Council’s wider plan to improve the area’s cycle network, including 14km of new bike routes across the borough.

With a cycle path running around the outside and zebra crossings at each exit, the roundabout prioritises cyclists and pedestrians over motorists.

The roundabout also adheres to the Conservative government’s design guidance for cycle infrastructure, which states that “roundabouts with higher traffic flows and speeds should have protected space for cycling, both around the junction and on all approaches and exits, so that cyclists do not need to cycle in mixed traffic.”

Scargill, however, doesn’t seem aware of his own party’s policy. His leaflet reads: “I’m shocked by how little consultation has taken place on such a major proposal, which would mean vehicles would be forced to give way to both cyclists and pedestrians as they enter and exit the roundabout.

“These roundabouts have been trialled elsewhere in the country, resulting in driver confusion and collisions. Residents have called the roundabout a ‘killing zone’.

“Concerns have also been raised that the roundabout will make congestion worse, especially as development begins with Labour’s 3,000 new houses.”

This is shameless stuff from @N_TynesideTory, peddling misinformation, provoking anti-cyclist sentiments and jingoistic anti-European nonsense and, what's more, going against Tory national policies in support of #activetravel - you might want a word, @ToryCycling pic.twitter.com/yLUEUVyCI2

Unsurprisingly, Scargill’s campaign to halt construction on the roundabout was met with a flurry of criticism.

Another Twitter user wrote: “Apart from the fact that this type of design can be found in English design guidance and in turn is based on sound evidence, the jingoism makes it harder for everyone involved in trying to make streets safer. Utterly bizarre.”

Some, of course, saw the funny side: Jonathan tweeted that Scargill’s leaflet was the “EU and cycling anti-fandoms crossover event of the century”, while Harry was inspired to start a petition “to paint the EU flag on the centre of Dutch roundabout in Cambridge.”

Road.cc contacted Scargill today to question his opposition to a scheme seemingly in line with government guidance.

“I entirely endorse the government's active travel agenda. However this proposed site on Rake Lane is unsuitable and unnecessary”, he told road.cc. “The Council's plans for 3,000 new houses to be built on green space adjacent to the roundabout will increase traffic and congestion on this site. Residents have raised issues of safety for pedestrians, cyclists and motorists around the proposed new structure.

“We are lucky in North Tyneside and have a beautiful area to cycle through. But the Council's cycling strategy should instead focus on connecting towns by bringing disused wagon ways up to scratch, rather than making our roads more dangerous than they already are.”

When asked by road.cc about the online criticism of his leaflet, the activist responded: “The use of the EU flag was to demonstrate the origins of the style of roundabout, which is not common in the UK.

“I am deeply saddened that what should have been an open discussion about proposals for a roundabout in our local community has become so vitriolic and personal.

“As a cyclist myself, I know how important it is to feel safe when using the roads. However, this specific proposal is unsuitable and I will continue to listen to residents and do everything I can to stop it going ahead.”

Construction on the Rake Lane roundabout begins this week.