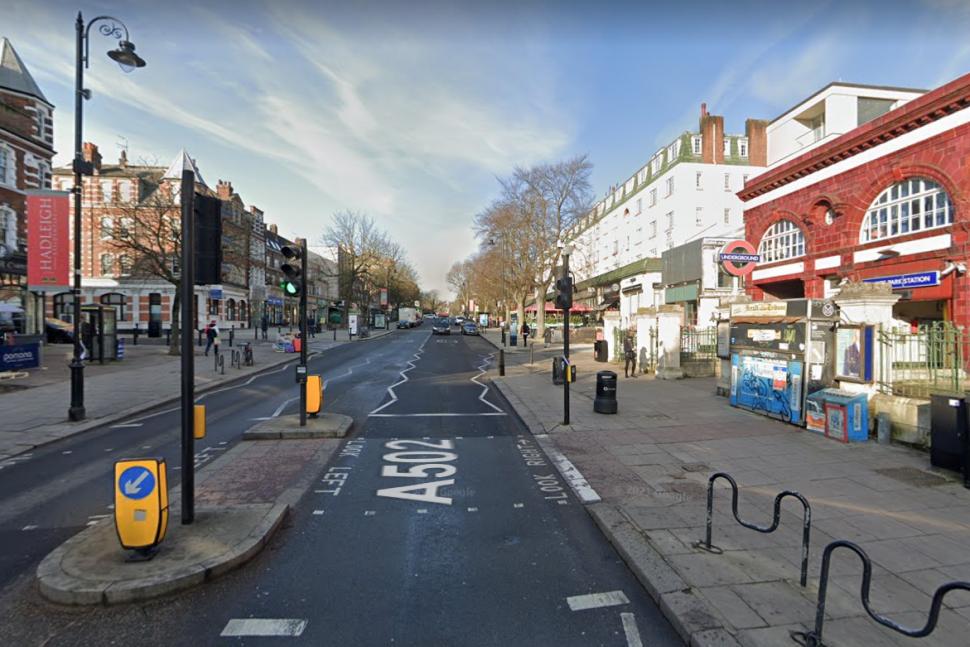 Councillors had claimed schoolkids won’t use protected bike lane due to gradient averaging 3.5% – but local schools back the infrastructure
by Simon_MacMichael

Updated to include result of committee vote.

A Camden Council committee yesterday evening voted through plans for a protected cycle lane on a road that Conservative councillors had claimed was "too steep" for many cyclists, including children.

Success! The Haverstock Hill lanes have just been approved by Camden’s Scrutiny Committee, 5 to 1. No further hurdles - the scheme will go ahead. pic.twitter.com/HtEMqU9wcT

Tory councillors in the Labour-controlled borough had called in the scheme, but the council's culture and environment committee voted it through by a majority of five to one, with the news welcomed by London's walking and cycling commissioner, Will Norman.

I'm delighted that @CamdenCouncil approved the Haverstock Hill cycle lanes last night, dismissing this nonsense that the route is too steep. Protected lanes are even more important on hills because of the speed differential between cyclists & motor vehicles. 👏👏@adamdkharrison https://t.co/kXLkYI8o7h

Conservative councillors in Camden want plans for a protected cycle lane in the borough scrapped because they claim the road it is on is too steep, saying that among other things, schoolchildren won’t use it – even though four local schools back the plans.

The Camden New Journal reports that the Conservative group on the London council have called in the route on Haverstock Hill, meaning that it will be scrutinised by Camden’s culture and environment committee at a meeting this evening.

Under its powers of call-in, the committee can approve the original decision, ask for it to be reconsidered, refer the issue to the full council for a debate, or require more information or that further work be carried out.

The cycle lane runs a little over a kilometre from the junction with Prince of Wales Road, just north of Chalk Farm tube station, up to the junction with Pond Street, where the Royal Free Hospital is located, and passes through Belsize Park on the way.

Councillor Oliver Cooper, leader of the Conservative Group on the council, described it as “one of the most daunting climbs in London, and that won’t change with cycle lanes.”

In fact, it has an average gradient of 3.5 per cent, with a short stretch nudging 5 per cent early on through a section of Haverstock Hill that has become known as Steele’s Village, and there is no shortage of much tougher climbs in the capital – not least, Swain’s Lane in nearby Highgate.

Construction is due to start in October under an 18-month experimental traffic order, with a full public consultation held after 12 months to decide whether or not to make the changes permanent.

Publishing the results of a consultation into the 18-month trial earlier this month, Camden Council said the route had been backed by four local schools, and the charity Wheels For Wellbeing, which campaigns on behalf of disabled cyclists, has also endorsed the lane.

“Yet Camden’s model has expressly assumed that everyone – whatever their age and whatever their disability – could cycle up and down that hill,” added Councillor Cooper, who described the scheme as “detached from reality.”

Labour holds 43 of the 54 seats on the council. The Conservatives are the largest opposition party with seven seats, while the Liberal Democrats have three and the Green Party one.

A Camden Council statement said: “During the consultation, older and disabled residents told us that the lack of protected cycle lanes is one of the biggest obstacles when wanting to take up cycling.

“For example, one said the plans will ‘allow disabled people who might have been too fearful to use active transport greater confidence to do so’. The disabled cyclists charity Wheels for Wellbeing also wrote in to support the plans.”

When the results of the consultation were announced earlier in August, Councillor Adam Harrison, the council’s cabinet member for a sustainable Camden, said: “Last year we began making changes to enable greater social distancing and provide non-polluting alternatives to public transport during covid. There were also big benefits for quality of life in Camden in the form of keeping more people safe from road danger, improving air quality and cutting carbon.

“In Camden, more than two-thirds of people do not have a car, and already more than 8 in 10 trips made by Camden residents are made by public transport, walking and cycling. But we know this can rise further if we make our streets as safe and as welcoming as possible.

“I have been contacted on many occasions by parents asking for much safer travel for their children. With numerous schools on or close to Haverstock Hill, segregated cycle lanes are designed to allow more kids to ride a bike to school, improving their health and making Camden a more family-friendly borough.

“For that reason, I am pleased that four local schools have supported the proposals, along with the Royal Free Hospital. We should also not forget the new pedestrian crossings that this trial will introduce, making it a much better environment for people who want to walk in the area. I am also pleased to be introducing extra disabled parking,” he added.

Tonight’s meeting begins at 6.30pm and beforehand Camden Cyclists will be holding a demonstration outside the venue, the Crowndale Centre, Mornington Crescent.

1
How does this work!? Crazy half-wheeled bike concept goes viral
2
Lone female cyclists are “being targeted”, says former Scottish champion
3
Cyclist punched repeatedly by motorist in road rage incident
4
Cyclist killed after being struck by van driver during time trial
5
“How would you like to be on camera now?” Shirtless driver accosts CyclingMikey
6
Near Miss of the Day 790 updated: Cyclist gets ANOTHER close pass from same taxi the day after punishment pass
7
UCI “kindly requests” that riders stop using race number sleeves
8
Near Miss of the Day 791: “Careful lad,” says van driver parked in bike lane… as another driver pushes in front