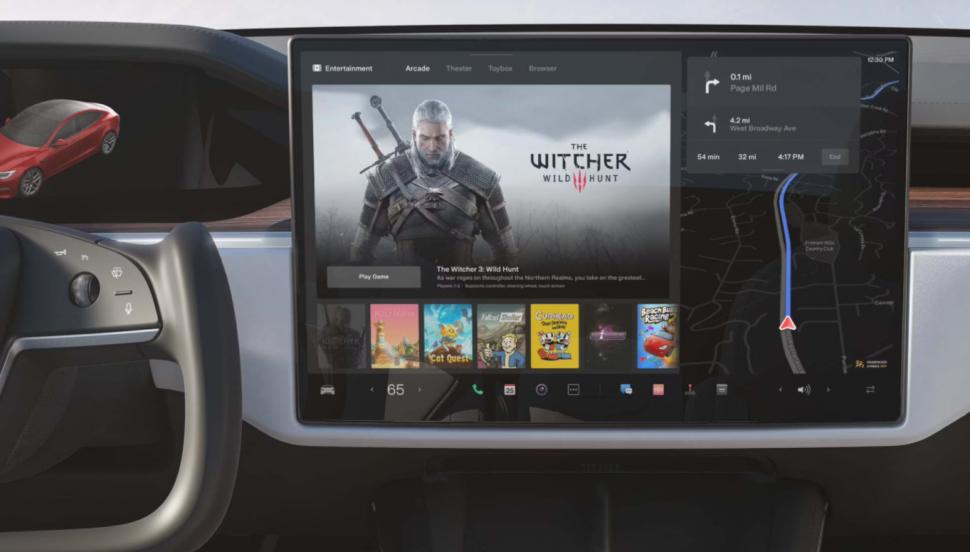 Owners of Tesla cars can now play video games while driving their vehicles following the company’s latest update, with Elon Musk’s business accused of encouraging driver distraction and endangering them and other road users.

The infotainment touchscreen panel that sits in the middle of the dashboard – and which in the latest models has a whopping 17-inch display, bigger than most laptop screens – has been capable of being used to play video games for a while now when the vehicle is in park mode.

But the New York Times reports that following an over-the-air software update released to most vehicles over the summer, those games as well as a number of new titles can now be played while the vehicle is in motion – leading to criticism of the company by safety bodies in the US, which have already raised major concerns over the vehicles’ Autopilot mode.

There is no doubt that Tesla itself is aware of the potential for motorists to be playing games while their cars are moving, with the newspaper reporting that when loading one game, a warning is given which reads, “Solitaire is a game for everyone, but playing while the car is in motion is only for passengers.”

There is a button that needs to be pressed to confirm that the person playing is indeed a passenger, but it’s not hard to envisage a driver pressing that – plus, given the size of the screen, if the person sitting next to the motorist is playing a video game while the vehicle is being driven, that in itself is highly likely to cause distraction.

Jonathan Adkins, who is the executive director of the Governors Highway Safety Association, which brings together state highway offices across the United States, told the New York Times: “It’s a big concern if it plays in view of the driver, for sure.”

That concern comes on top of unease about Tesla’s Autopilot system which, when engaged, is able to steer, accelerate and apply braking without input from the driver – who is supposed to keep his or her hands on the wheel, although the function can operate even if they don’t – as well as criticism of the ability of in-car cameras to ensure that motorists are keeping their eyes on the road.

The National Highway Traffic Safety Administration (NHTSA) has said that there have been at least 12 deaths since 2016 as a result of Tesla cars being in Autopilot mode, and Adkins said that the ability of video games to be played at the wheel “is crying out for NHTSA to provide some guidance and regulation.”

NHTSA chair Jennifer Homendy said: “It’s incredibly frustrating. We’re trying to warn the public and tell Tesla, ‘Hey, you need to put some safeguards in.’ But they haven’t.”

Tesla is not the only car manufacturer developing autonomous vehicles, but as the company that is at the forefront of the technology it attracts particular scrutiny and crashes involving its vehicles are widely reported on – indeed, we have covered several here on road.cc.

In 2016, a Florida man was killed when his Tesla, in Autopilot mode, crashed through a truck trailer at a junction.

The driver of the truck, who rushed to give assistance, said that a Harry Potter film “was still playing [in the vehicle] when he died and snapped a telephone pole a quarter mile down the road.”

He said that he heard the film, but did not see it, while the Florida highway patrol said only that there was a portable DVD player in the vehicle.

In May 2017, a robotics expert from Stanford University in Tesla’s home state of California warned that Autopilot should not be used in the vicinity of cyclists.

Warning that lives would be put at risk, post-doctoral researcher Heather Knight wrote that she “found the Autopilot’s agnostic behaviour around bicyclists to be frightening.”

In a review posted to Medium, she said: “I’d estimate that Autopilot classified ~30 per cent of other cars, and 1 per cent of bicyclists.

“Not being able to classify objects doesn’t mean the Tesla doesn’t see that something is there, but given the lives at stake, we recommend that people NEVER USE TESLA AUTOPILOT AROUND BICYCLISTS!”

She concluded her review by saying: “Do not treat this system as a prime time autonomous car. If you forget that … bikers will die.”