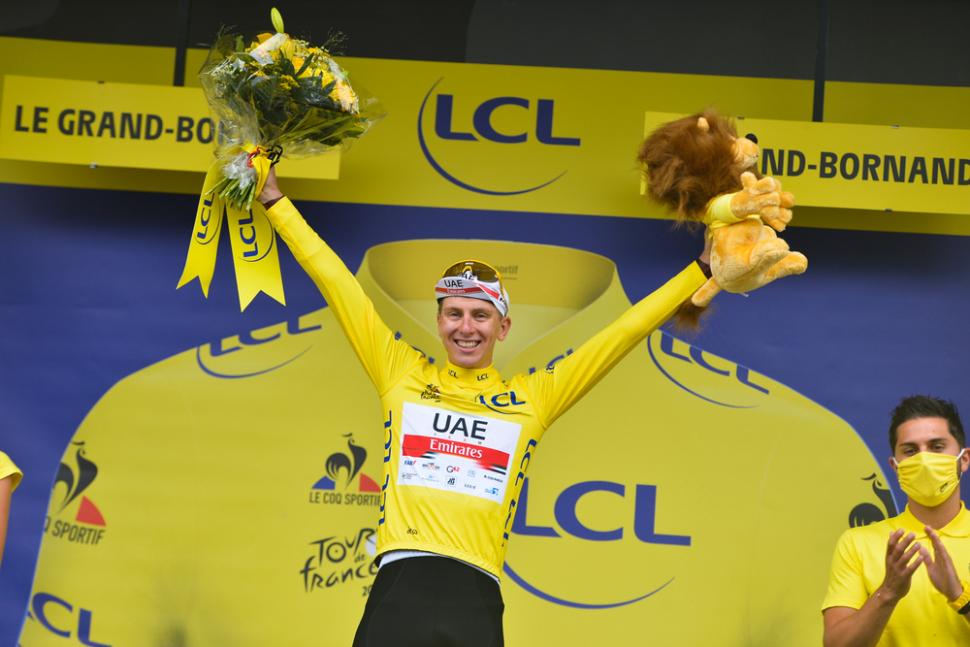 Defending champion attacks on penultimate climb to take overall lead; Geraint Thomas out of contention after being dropped early on
by Simon_MacMichael

Defending champion Tadej Pogacar of UAE Team Emirates is back in the race leader’s yellow jersey at the Tour de France after launching a devastating attack more than 30km from the end of the first mountain stage of the race to take command of the general classification, finishing fourth in Le Grand Bornand, the stage won by Dylan Teuns of Bahrain Victorious.

On another day of pulsating action, there had been drama right from the beginning of the rainsoaked 150.8km stage from Oyonnax, with 2018 winner Geraint Thomas of Ineos Grenadiers dropped on the uncategorised climb in the opening kilometres and losing any hopes of a high overall finish.

Pogacar made his move from the overall contenders’ group with around 3.5km remaining of the day’s penultimate climb, the Col de Romme, only Richard Carapaz – the highest placed Ineos Grenadiers rider – initially managing to go with him, but unable to follow a second acceleration from the Slovenian shortly after.

One-by-one, Pogacar swept past the riders ahead of him on the road, chipping away all the time at the virtual race lead held by Jumbo-Visma’s Wout Van Aert after overnight leader Mathieu van der Poel had been shelled out the back of the GC group earlier on the same climb.

Michael Woods of Israel Start-Up Nation crossed the summit of the Category 1 climb more than a minute clear, but was passed by Teuns on the final climb, the Col de la Colombiere.

By the summit, Pogacar had passed everyone bar the Bahrain Victorious rider, whom he had firmly in his sights, but with his focus on the overall victory rather than the stage win, eased off on the slippery roads of the descent.

That enabled Ion Izagirre of Movistar – who had an eventful afternoon, going off course after misjudging a corner, then needing the attention of the race doctor after a subsequent crash – and Woods to rejoin him, the Spaniard taking second place ahead of the Canadian.

Besides Teuns’ win, Wout Poels completed a memorable couple of days for Bahrain Victorious by taken over the polka dot jersey from team-mate Matej Mohoric, winner of yesterday’s stage.

With the time cut set at just over 36 minutes – the calculation is 16 per cent of the stage winners’ time – there was a strong chance that today’s stage could be influential on the points competition.

Given the size of the group that had come together at the tail end of the race, it would have been highly unlikely that its members would have been excluded from the race for missing the time limit.

However, it could have been influential for the contest for the green jersey, since riders who finish outside the time limit but allowed to continue at the discretion of the race jury lose any points they have amassed to date – which would have spelled very bad news for Mark Cavendish, who is leading the competition.

Happily for the Deceuninck-Quick Step rider, who made his Tour de France debut 14 years ago and is well used to riding within the time limit in mountain stages, he rolled across the line in a huge group of riders with a minute or so to spare.

A second stage in the Alps is on the menu tomorrow, with the first mountain finish of the race at Tignes, where Stage 19 of the 2019 edition had been due to finish but the overall times were instead taken at the top of the Col d'Iseran after a hailstorm and mudslide rendered the final kilometres impassable.

It was not easy, tactically – in the beginning a lot of stress, I mean stress like nervousness. It was hard to get a group in the front, with 60 guys full on and on, and then Wout [Poels] was aiming for the climber’s jersey, he was up there alone, then it was easy for us, having to follow the wheels.

The second-last climb it was a bit worrying, because they started from the bottom really hard, and it was hard for me to follow that pace, but I came back nicely.

In the top [of the Colombiere], I heard Pogacar was coming. I was thinking, OK, if I can make the top with one minute, it should be OK for the descent.

It’s just amazing to win in the Tour. It’s a nice taste ... it was an honour to my granddad, who died just before the Tour, that’s why I was pointing up, he died just ... we had the funeral a few days before I had to go to the Tour, so it was a bit emotional for me, this last 10km. I hope he’s proud of me.

I said we’ll see how it goes today. Then in the start it was a super-hard day, riders everywhere. It was super-hard for everyone, and in the end I felt good in this weather, it feels great.

Before the last three climbs, I said to my team mates: ‘Let’s try and break the race,’ and we did it. I saw that everybody was suffering. I just took off, and tried to pace myself to the finish line. I’m pretty happy.

I suspected after yesterday, we did a lot of work, the other teams attacked us, they thought they could break us as a team ... I thought they will show more today ... but, yeah, in the end, I guess they were affected from yesterday, and from today’s cold and rain.

We knew it was going to be tough from the beginning with that uphill start, but I had Michael [Morkov] with me and am thankful to him for helping me make it over all those climbs.

It was important to have him there and I wasn’t worried for a single moment about not making the time cut, as we paced ourselves really well. Sunday will be another mountain stage and the plan is the same, make it safely home before the rest day.

1
"Check the Highway Code": Police officer claims cyclist shouldn't ride "in the middle of the road"
2
Driver "used bus as a weapon" against cyclist, loses appeal over sacking
3
Hit-and-run driver moved unconscious cyclist off road before fleeing scene
4
Road rage van driver who assaulted cyclist, knocking him unconscious, handed suspended sentence
5
Why was Mark Cavendish riding with Lance Armstrong this week?
6
Five-year-old boy killed after van driver knocks him off bike
7
Want the “fastest socks on the planet”? They’re yours for €1,000 + more tech news from Campagnolo, Rapha, Van Nicholas...
8
Near Miss of the Day 827: Bus driver “bullies his way into a gap that was never there”.