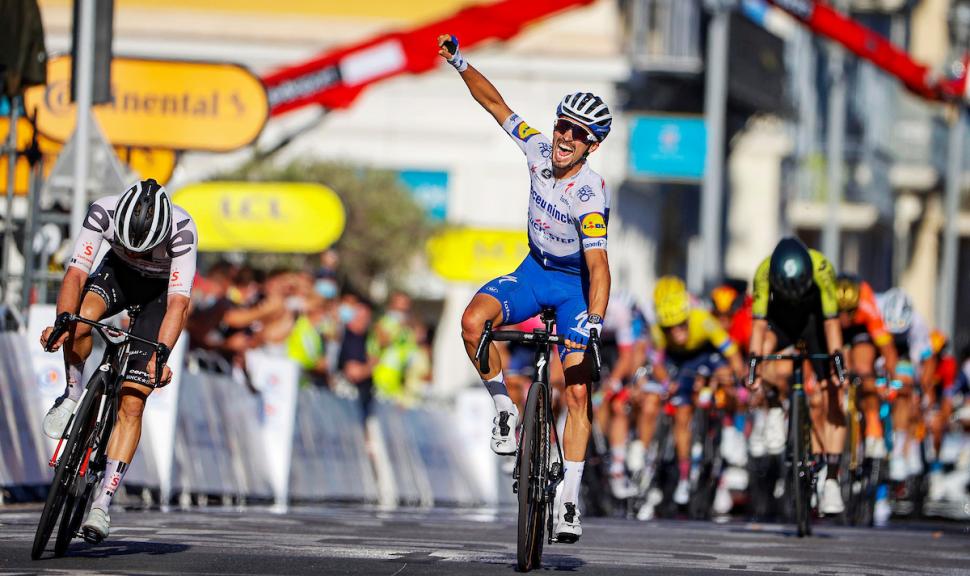 Julian Alaphilippe, who spent two weeks in the lead of the Tour de France last year, is back in the yellow jersey this evening after winning Stage 2 in Nice.

On a day when the Côte d’Azur basked in its typical late August sunshine in contrast to yesterday’s deluge, the Deceuninck-Quick Step rider attacked on the day’s final climb, the Col des Quatres Chemins.

Marc Hirschi of Team Sunweb went with him, the pair soon joined by Mitchelton-Scott’s Adam Yates, who took the maximum 8 bonus seconds on offer at the top of that climb.

The trio had a lead of around 20 seconds on a select bunch as they headed down into Nice and the finish on the Promenade des Anglais, and with Astana leading the chase it was touch and go if they would stay away.

Alaphilippe, following Yates’s wheel, made his jump from around 100 metres out, Hirschil going after him but just running out of road before he was able to overhaul the Frenchman.

Yates, meanwhile, held on for third, a second ahead of the pursuing bunch, and moves to second overall.

Following the crashes yesterday, Rafael Valls of UAE Team Emirates, with a broken leg, and Philippe Gilbert of Lotto-Soudal, who broke a kneecap, were absent from the start of the 196km stage in Nice.

The latter’s team-mate John Degonkolb had been eliminated yesterday evening after being the only man to finish outside the time limit, meaning the Belgian outfit took the start with just six riders.

Today’s stage saw the peloton tackle the Col de la Colmiane and the Col de Turini, with the man in the yellow jersey this morning, Alexander Kristoff of UAE Team Emirates, distanced on the second of those Category 1 climbs.

The day’s break – including Peter Sagan of Bora-Hangrohe, wearing the green jersey which will now revert to Kristoff tomorrow – was a member of the day’s seven-man break, which was swept up on the Col d’Eze as the GC group came to the fore on the first of two circuits in and out of Nice.

On the descent, EF Pro Cycling’s Dani Martinez crashed and while he rejoined the leaders ahead of the closing circuit, he lost contact with it on the final climb.

On that final ascent, Jumbo-Visma’s Tom Dumoulin crashed shortly after Alaphilippe made his decisive move.

The uncertainty that caused among his team-mates at the front of the group possibly helped the Frenchman get away and ultimately take the win, which he dedicated to his father who passed away just two months ago yesterday.

I wanted so much to get a stage victory for my late father. This was my main goal coming into the race. Everything that comes from now on is a bonus, but I wanted this victory for him and knowing that I got it makes me so happy.

I wanted so much to get a stage victory for my late father. This was my main goal coming into the race. Everything that comes from now on is a bonus, but I wanted this victory for him and knowing that I got it makes me so happy.

It was a really hard day out, even the climbs at the beginning were being ridden at a solid pace and you could feel the fatigue as we came onto the climb the first time, you could see there were a lot of people suffering, just like me.

There were already two up the road and when they went it was still quite early and Jumbo-Visma were riding quite a hard pace anyway. So, I waited until the little steep bit and jumped across and tried to work straight away.

In the final I got away with the two guys, we started working well towards the end, and yeah, I was never going to win that sprint, was I? So, I think third was the best I was going to come out of that situation.

It was a block headwind and I ended up on the front, not a good scenario for me there, but like I said, I was probably never going to be winning that sprint anyway, they’re both faster than me. So, I can be happy with third.

1
Brexit cost bicycle business £250,000 in two months
2
James May claims he is now 'well buff' after cycling throughout lockdown
3
Do certain types of clothing make cyclists seem 'less human' to motorists?
4
Canyon partners with Cyclescheme for up to 39% savings and no upfront costs
5
Video: Cyclist pushed off bike by car passenger on Irish mountain pass says “they could have killed me”
6
SRAM introduces Rival eTap AXS groupset: find out what you need to know + video
7
Edinburgh bus driver sacked after knocking cyclist off bike loses unfair dismissal case
8
Gogglebox star gets TikTok ban for cyclist crash prank