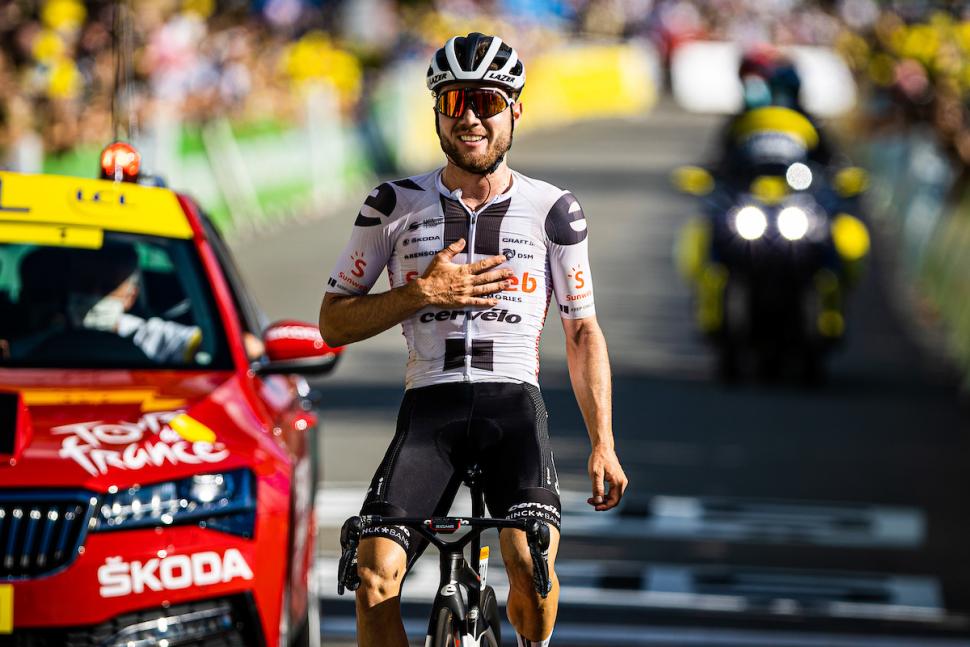 Marc Hirschi of Team Sunweb, who has twice missed out on victory during his debut Tour de France, has made it third time lucky in today’s Stage 12 in Sarran.

The record books will suggest that it was a solo victory by the 22-year-old Swiss rider – the second man across the line, Pierre Rolland of B+B Hotels was around 45 seconds behind him – but it was set up by a well-executed team plan on the day’s penultimate climb.

The GC group finished around two and a half minutes after the stage winner, with Primoz Roglic of Jumbo-Visma retaining the race lead.

The day’s early break, comprising six riders, was brought back into the main group as Bora-Hansgrohe set a strong pace at the front on the group as the race entered its final kilometres.

They successfully distanced Sam Bennett of Deceuninck-Quick Step on the climb of La Croix du Pey to try and help Peter Sagan reduce his deficit to the Irishman in the points competition after the Irishman’s relegation yesterday.

As the final two escapees were about to be swept up, however, with 43km still to ride, Team Sunweb’s Tiesj Benoot followed and Søren Kragh Andersen jumped off the front of the bunch.

They would be joined by Hirschi plus Marc Soler of Movistar and Bora-Hansgrohe’s Max Schachmann, presumably sent up the road to police the move, but he would be powerless to prevent Team Sunweb from pressing home their numerical advantage.

Ahead of the Category 2 Suc de May, a select group of riders was in pursuit, including Deceuninck-Quick Step’s Julian Alaphilippe, while Soler had attacked and was alone at the head of the race.

With 28km remaining of the 218km stage from Chauvigny, however, Hirschi passed the Spaniard and there would be no catching him as he rode to the victory that had eluded him first on the opening weekend in Nice and then in the Pyrenees last Sunday.

The plan for today was to go for the breakaway, we really wanted to be there. At the start we saw that CCC and Bora really controlled the race so we switched our tactics.

Then we decided that Søren and Tiesj would go on the Category-3 climb and I would wait until the next climb. It was the plan that I followed Alaphilippe or the other big guys.

Then at a moment I saw there was a lot more jumping from the bunch and just went for it and followed Jungels.

The guys sat up ahead and brought me to the front and then the gap opened and we went full gas, before I then attacked on the last climb.