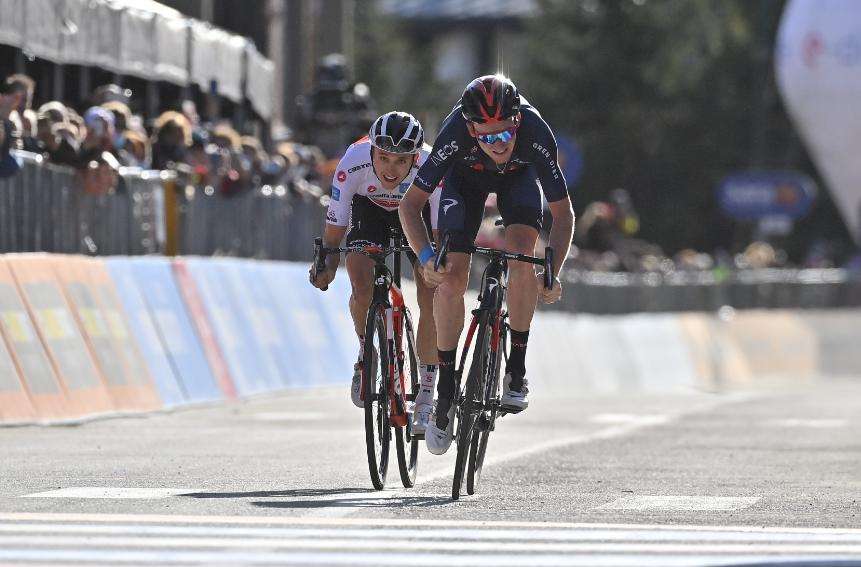 Tao Geoghegan Hart pulled off a remarkable steal to win stage 20 of the Giro d’Italia, with Wilco Kelderman losing the pink jersey and his teammate Jai Hindley now leading the general classification by just tenths of second. It sets up the closest Giro d'Italia and closest Grand Tour battle ever going into tomorrow's 15.7km time trial on the final day.

After an Ineos Grenadiers attack spearheaded by the brilliant Rohan Dennis left Kelderman isolated with 30km to go, Geoghegan Hart and Hindley were left to battle it out on the slopes of the Sestriere, with Geoghegan Hart pulling away inside the final 100 metres. If he beats Hindley in the TT tomorrow, the 25-year-old will become the second British winner of the Giro d’Italia.

The opening 150 kilometres were largely uneventful, but the fireworks started going off on the second of two ascents of the famous Sestriere. Led by Rohan Dennis and Gianni Moscon of Ineos Grenadiers, who were aiming to line up Geoghegan Hart to take the advantage, a gap formed between the Ineos train and Team Sunweb, with Hindley and other Team Sunweb domestiques nowhere to be seen.

Geoghegan Hart just about managed to stay on the wheel of his super strong teammate Rohan Dennis, while Einer Rubio (Movistar) broke away from the Ineos group and opened up a lead. The big story was going on behind though, with Kelderman isolated and Hindley being forced to make the decision to ride off and close the gap on Geoghegan Hart himself.

With 13km to go, just three seconds separated Hindley and Geoghegan Hart in the virtual general classification. Rubio was reeled in, and going into the final climb it came down to Hindley and Geoghegan Hart, with Rohan Dennis for company. In the Maglia Rosa group, a fading Kelderman was distanced by Joao Almedia (Deceuninck Quick-Step) who was looking to get himself back on the podium.

With bonus seconds available on the line (10 secs for first place and 6 secs for second) neither Geoghegan Hart or Hindley could afford to let the other go right the way to the line.  Dennis peeled off with just over 2km to go, and 4 secs separated Geoghegan Hart and Hindley with the pair neck-and-neck... before Dennis appeared again, proving himself as the ultimate super-domestique of this Giro d’Italia.

With under a kilometre to go Dennis peeled off for the final time and nothing was separating Geoghegan Hart and Hindley, as it became clear that the fight for the Maglia Rosa would go down to the final day (1989 Tour de France, anyone?). Around 100m from the line, Geoghegan Hart made a dramatic final attack on Hindley to take the bonus seconds and win the stage... but it wasn’t quite enough to take the pink jersey, and Hindley will now wear it on the 21st and final stage tomorrow. Almeida's attack ultimately wasn't enough to reclaim third spot in the GC, with Kelderman rolling in 34 secs behind him.

The 15.7km TT in Milan tomorrow will almost certainly be a straight shoot-out between Geoghegan Hart and Hindley. The former beat the latter by over a minute on stage 14’s 34.1km ITT; but in theory the more relevant is the result of stage 1's 15km time trial, in which Hindley beat Geoghegan Hart by 49 secs. Considering Geoghegan Hart came into the Giro as a domestique for the unfortunate Geraint Thomas, however, it’s highly likely the 25-year-old didn’t leave it all out on the road in that opening stage.

Has Hindley done enough to keep the Maglia Rosa in Milan, or will Geoghegan Hart finish the job? It’s going to be a thrilling finale; but whoever pulls it off, at least two out of three Grand Tour general classifications in this craziest of years will have been decided after an unexpected changing of the guard on the penultimate day...

I’m speechless. It’s something I’ve dreamed about since I was a little boy, you know? To wear the leader’s jersey in a Grand Tour is an incredible privilege, and… yeah, it’s not ideal to take it off Wilco, but it’s nice to keep it in the team. I’m lost for words. I saw [Tao] wasn’t looking super great at first on the climb, and I was thinking I was going to be able to get rid of him, and try and put time into him, but I just didn’t have it in my legs. I was trying everything when I was attacking but I just couldn’t get rid of him so then I tried to beat him in the sprint but, yeah, he was just too strong. I don’t know [about the time trial]. I’m going to give it my best tomorrow and see how it goes, but, regardless of the result, I’m happy with how I’ve been riding and I’m super happy with how the team has ridden this Giro.

No, I mean we were here for Geraint, that’s really well documented [on stage 1]. That was 20 stages ago, very different parcours, very different day. I think I showed my TT legs in the last TT and we’ll see what happens tomorrow. It’s a race so we’ll give everything and what will be will be.