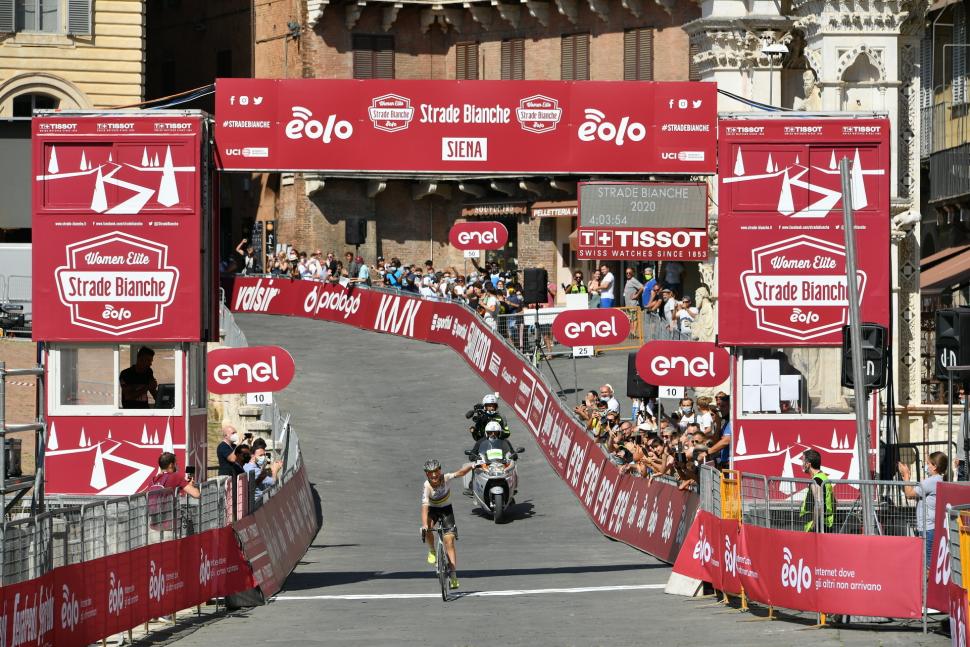 World Tour gets back underway in Italy
by Alex Bowden

Saturday brought the first men’s and women’s World Tour races since the road racing season restarted. Things didn’t go entirely smoothly with a rider withdrawn from the men’s race following a positive coronavirus test and one of the women’s teams suffering the theft of six bikes - but the races themselves unfolded without a hitch.

Strade Bianche had originally been due to take place on March 7 but the coronavirus situation in Italy at that time led to its postponement.

Today it was announced that Sylvan Dillier of the AG2R La Mondiale team would not ride the men’s race after a positive coronavirus test ahead of the race.

The Swiss rider wasn’t happy with the decision, proclaiming himself, “the healthiest person in the world.”

“The entire health system is a big joke,” he told Swiss newspaper Blick. “In my opinion, it is on the verge of locking up healthy people. It's just not right.

“I'm really bummed by this. I am the healthiest person in the world. I have had several tests in the past few days and they were all negative. Even with a blood test, all values were good.”

It’s also been reported that Lizzie Deignan’s Trek-Segafredo team suffered the theft of six of their Emonda bikes overnight.

A tweet from the team said: “Bad start to the day for the team in Italy. Six Trek Émonda of the women team were stolen in the night. The thieves broke through the roof of the truck and took the bikes. The riders will still start the Strade Bianche on spare bikes.”

The men’s race was won by Wout van Aert (Jumbo-Visma), who had finished third in his two previous appearances.

In 2018, the Belgian had memorably come off his bike after cramping up on the final climb into Sienna, but there was no repeat here.

After attacking the front group with 13km to go, he was never caught.

"One man who is head and shoulders above everyone else today."

What a day for @WoutvanAert !