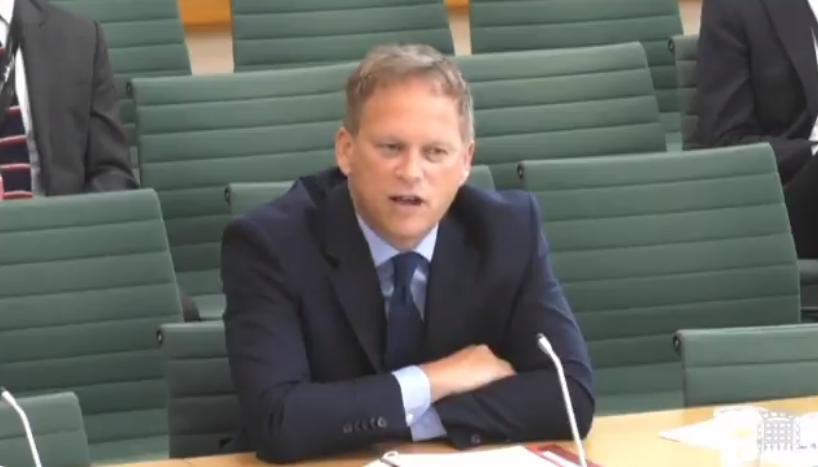 Grant Shapps: Cyclists should have number plates, be insured and subject to speed limits

17/08/22, 11:52: Read our update to this story here: Confusion as Grant Shapps now says he is "not attracted to bureaucracy" of number plates for cyclists

Transport Secretary Grant Shapps has said that cyclists should be insured, carry licence plates on their bikes, and be subject to the same speed limits as motorists.

The Tory cabinet minister told the Mail that putting such measures in place would be considered as part of the current review that may see a causing death by dangerous cycling law introduced.

It’s less than a fortnight since Shapps, who was appointed Secretary of State for Transport by Boris Johnson in July 2019, outlined his plans to the Mail for that legislation – but his position set out in the same newspaper this evening, and said to have the support of Whitehall officials, goes way beyond that.

This evening Shapps, who risks losing his cabinet post once Conservative leadership contenders Liz Truss or Rishi Sunak puts their cabinet together next month, insisted cyclists should be subject to the same laws as motorists – including abiding by speed limits, being insured, and carrying identifiable registration plates.

In particular, he is said to be concerned about cyclists riding at speeds above 20mph, which he claims they can “easily exceed” – even though the speed of e-bikes legal for road use, for instance, is capped at 15.5mph, and the vast majority of people riding bicycles would never approach such a speed on flat roads, nor are bikes required to be fitted with speedometers.

He told the newspaper: “Somewhere where cyclists are actually not breaking the law is when they speed, and that cannot be right, so I absolutely propose extending speed limit restrictions to cyclists.

“Particularly where you’ve got 20mph limits on increasing numbers of roads, cyclists can easily exceed those, so I want to make speed limits apply to cyclists.

“That obviously does then lead you into the question of ‘well, how are you going to recognise the cyclist, do you need registration plates and insurance and that sort of thing’.

“So I’m proposing there should be a review of insurance and how you actually track cyclists who do break the laws.”

Requiring cyclists to carry some form of identification, such as a numbered tabard – suggested by motoring lawyer Nick Freeman, also quoted in the Mail’s article – is seen by some as an answer to the perceived problem of the minority of cyclists who ride recklessly, including jumping red lights.

But advocates of such schemes – which where they have been implemented, tend to be ditched quickly because of the cost of administering them, plus the fact they discourage cycling and the health and other benefits associated with it – tend to ignore the greater harm that law-breaking motorists, in vehicles that already carry registration plates, can do.

Nevertheless, Shapps continued: “I don’t want to stop people from getting on their bike, it’s a fantastic way to travel, we’ve seen a big explosion of cycling during Covid and since, I think it has lots of health benefits.

“But I see no reason why cyclists should break the road laws, why they should speed, why they should bust red lights and be able to get away with it and I think we do have to not turn a blind eye to that and I’m proposing setting up a review to do exactly that,” he added.

Most adult cyclists do in fact have liability insurance, whether under their household insurance policy or bike insurance, or through membership of organisations such as British Cycling or Cycling UK.

As the law stands at the moment, they are not required to carry third party insurance – unlike motorists, who are obliged by law to have that as a minimum, although that has not prevented an estimated million or more drivers taking to British roads without such cover.

The Mail also claimed that cyclists found guilty of killing a pedestrian face a maximum of two years in jail, which is incorrect.

True, that is the maximum jail term that can be imposed on someone found guilty of causing bodily harm through wanton or furious driving under the Offences Against The Person Act 1861.

But in two high-profile cases in the past five years in which cyclists were convicted of that offence following the death of a pedestrian, they were also acquitted of manslaughter – which carries a maximum punishment of life imprisonment.

By contrast, causing death by dangerous driving has a maximum jail term of 14 years – although since June this year, it has been increased to life if the motorist was under the influence of drink or drugs.

According to a report last year from the Parliamentary Advisory Council for Transport Safety, just one in 100 crashes in 2019 that resulted in the death of a pedestrian was due to a cyclist – compared to 65 in which a driver was to blame.

In July, when he resigned as Conservative Party leader, thereby putting in motion the battle not only for who would succeed him to that post, but also as Prime Minister, we asked whether Boris Johnson’s departure would be a blow for active travel, including cycling.

Neither Truss – his likely successor – nor Sunak are known as huge supporters of walking and cycling, and it could well be that Shapps’ comments tonight, which some might interpret as a dog-whistle to party members, could be an attempt to curry favour with the next Prime Minister and ensure he stays in post.