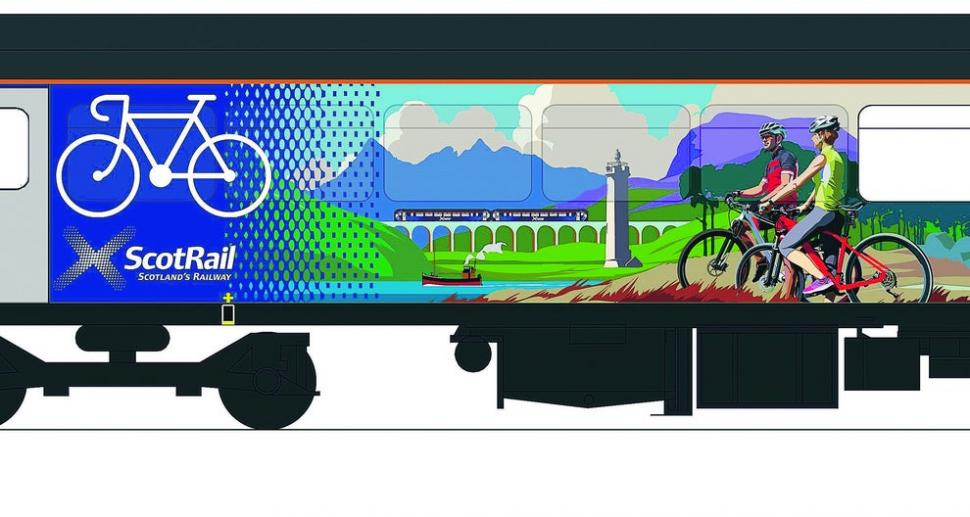 ScotRail has revealed a striking livery, inspired by railway posters of the 1930s and 1940s, for its forthcoming carriages that will have space for 20 bicycles on tourist routes in the West of Scotland.

In all, five carriages converted to carry bikes as well as bulky items including rucksacks and, in the winter, skiing and snowboarding equipment, are due to come into service on routes between Glasgow and Oban, Fort William and Mallaig.

The livery of the carriages has been designed by artist Peter McDermott, reports Scotland on Sunday.

It includes landmarks that can be seen from the train including the Glenfinnan Viaduct and Monument plus the Isle of Skye's Cullin mountain range, as well as a Highland cow and, of course, a pair of cyclists.

McDermott said: “It was a great pleasure to have been asked to produce this illustration, particularly as my own illustrative style is directly inspired by such artists as Norman Wilkinson and Tom Purvis, who among others, were responsible for the much-loved railway art of the 1930s and 40s.

“Their work was confined to train compartments and poster hoardings, but fortunately for me I’ve had the unique opportunity to work on a much larger canvas.

“That now allows this iconic illustrative style to travel through, and contribute to the very landscape we’ve all sought to interpret.”

Tom Smith, project manager at ScotRail, commented: “We’re delighted to be able to share the exterior design of our first active travel carriage.

“We’re living in uncertain times, but when these carriages are eventually introduced, it will be a welcome boost for cyclists and those in search of outdoor pursuits along Scotland’s most scenic railways.”

ScotRail unveiled the interior design of the carriages, which are being fitted out at Brodie's in Kilmarnock, last October.

We’re introducing carriages for bikes and sporting equipment on the #WestHighlandLine – a first on the UK rail network.

They’ll provide space for up to 20 bikes and large items like ski bags, as well as additional seating on this extremely popular route. pic.twitter.com/bBiMTYbdUe

Besides storage space for bikes and other equipment, they will also have seating areas with power sockets and Wi-Fi.

As with the rest of our trains on the #WestHighlandLine, each of these carriages will be fully upgraded before they enter service. They’ll have free WiFi, at-seat power sockets and a refurbished toilet. pic.twitter.com/2cuLF5qHuT

The customised carriages at aimed at reducing overcrowding on the popular routes as well as helping encourage cycle tourism, with a 2017 Scottish Government report saying it was looking at “introducing dedicated carriages for cycles and other outdoor sports equipment on rural routes in the north and west” of the country.

Alex Hynes, managing director of Scotland’s Railway, which brings together ScotRail and Network Rail Scotland, commented: “We need to do everything we can to get back our rail market when the time is right.

“We have got some really exciting plans for cycle carriages which we’ll be rolling out later this year to build on the active travel boom. We recognise cyclists want to use the rail network more.

“Essentially, we’ll hook the carriages on to the back of trains. We will initially be using them on the West Highland Line, recognising the status of Fort William as the mountain biking capital of the UK. If that trial is successful, that’s something we can emulate in other parts of the network.”