Copenhagen start and return of Alpe d'Huez for the men, while women’s race begins in Paris and ends with summit finish at La Planche des Belles Filles...
by Simon_MacMichael

Stars of the men’s and women’s peloton gathered at the Palais des Congres in Paris today to discover the routes of next year’s Tour de France and the inaugural edition of the Tour de France Femmes by Zwift.

The men’s race begins with a 13km individual time trial in Copenhagen on Friday 1 July, with the Danish capital finally hosting the Grand Depart after it was postponed this year due to a clash with the delayed Euro 2020 football tournament.

It will be the first time the race has started with a stage against the clock since Geraint Thomas took the yellow jersey in Dusseldorf in 2017, and will be followed by two road stages within Denmark.

Following an early rest day on Monday 4 July to allow time for the long transfer back to France, racing resumes in Dunkirk on Tuesday 5 July with a stage finishing in Calais, and the following day’s Stage 5 from Lille to Arenberg Porte du Hainaut will include 11 of the cobbled sectors used in Paris-Roubaix, with a total of 19.4km ridden over the pavé.

Friday 8 July sees the first summit finish of the race at La Super Planche des Belles Filles, now a regular fixture in the race since its first inclusion in 2012, with the race briefly heading into Switzerland with a stage finish in Lausanne on the Saturday and a start in the UCI’s home town, Aigle, on the Sunday.

Following a second rest day in Morzine, three days in the French Alps follow, with the highlight being a summit finish on the Alpe d’Huez, returning to the race after a three-year absence – the longest gap since that between its debut in 1952, when Fausto Coppi won, and its second appearance in 1976.

The race then heads towards the Pyrenees, with a rest day in Carcassonne ahead of three days in the mountains, including summit finishes at Peyragudes and Hautacam.

Those are followed by an individual time trial on the penultimate day from Lacapelle Marival to the spectacular setting of Rocamadour, ahead of the traditional closing day in Paris. 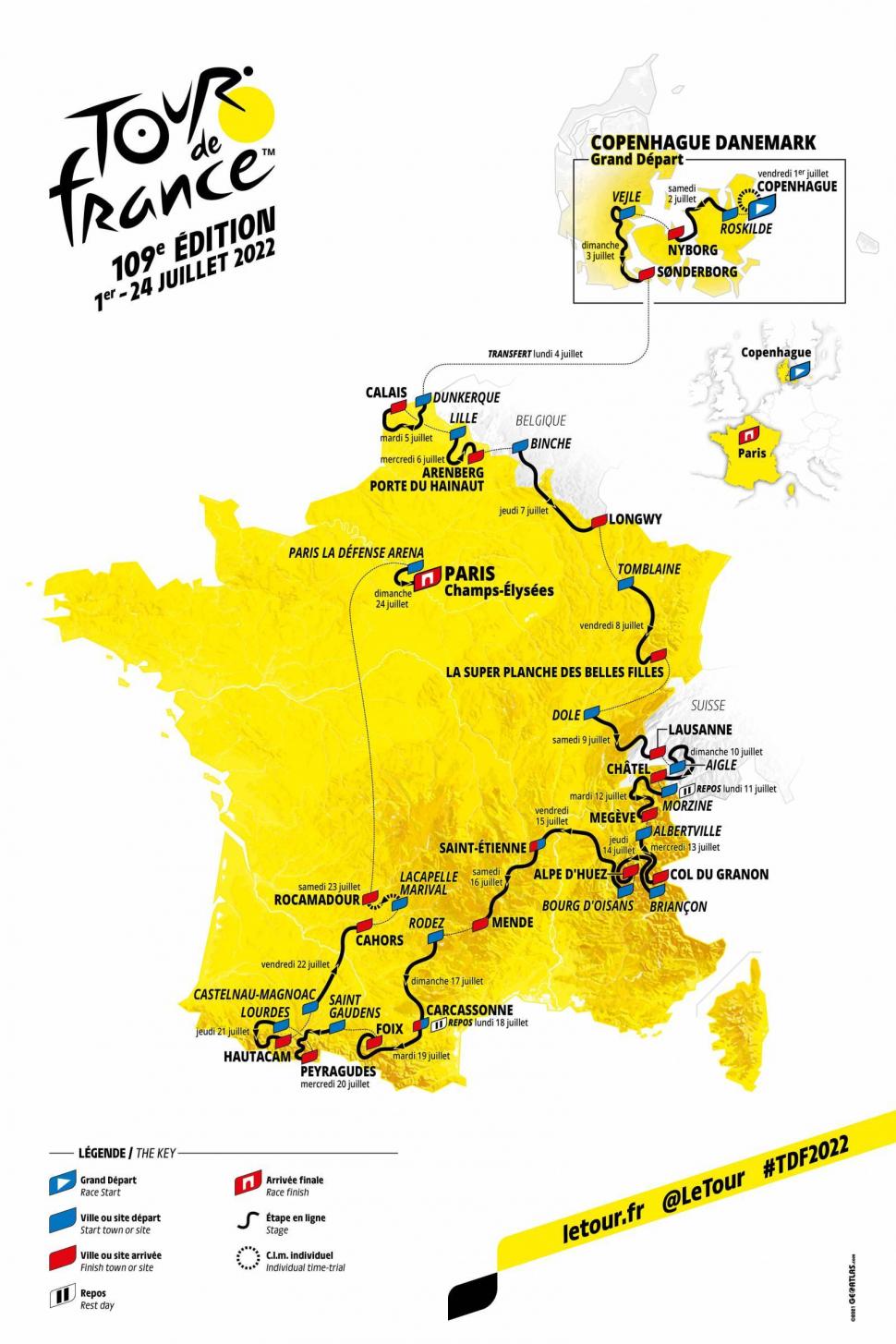 Before the announcement of the route of what will be the 109th edition of the men’s race, the parcours for the debut edition of the Tour de France Femmes by Zwift had been revealed.

The race will begin in Paris on the same day the men’s race finishes, with the world’s top women riders taking on 12 laps of the famous Champs-Elysées circuit.

The route then heads into north east France and, via the Champagne heartland of the Marne department, into the Vosges mountain, with the eighth and final stage finishing on the summit of La Planche des Belles Filles.