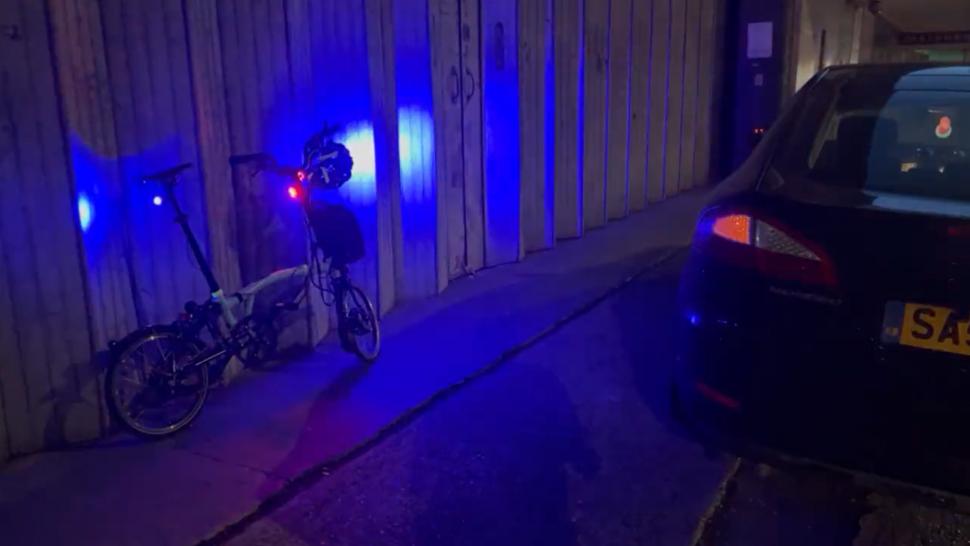 Since Thursday the Brompton operation has caught 11 drivers using their phones, one drug driver, a dangerous driver (pursued on two wheels) and numerous other offenders
by Dan Alexander

Surrey Police has added a Brompton e-bike to its fleet, with the folding bicycle already helping to catch more than 20 law-breaking motorists in its first few days in operation.

The police force says by far the most common offence officers using the Brompton have caught drivers committing is using their phone behind the wheel. In a two-hour cycling shift on Thursday one folder-riding officer caught five motorists.

Regular readers of the road.cc live blog will no doubt be aware of Surrey Roads Policing Unit's combative approach to dealing with anti-cycling rants and myths being spouted on social media, and the Brompton is the latest addition to the Vanguard Road Safety Team's real-world fleet.

What's more, the bike was donated by Brompton meaning the only cost involved — the force estimates — is 5p to charge the e-bike battery and the cost of maintaining the bicycle in crime-fighting condition.

On Thursday, a two-hour operation saw an officer catch five phone-using motorists, a disqualified driver, a drug driver, one vehicle in a dangerous condition, and a motorist using illegal number plates.

The driver of this Ranger Rover was seen driving inappropriately through Guildford town centre by the cycling #VanguardRST Skipper.

The driver failed a DrugsWipe and was arrested.

Bonus of a @BromptonBicycle fold up bike is it can go in the suspects boot when we move it. pic.twitter.com/9kFtMf8WPa

Yesterday's six-hour shift saw six more drivers using their phones caught, one driver without a licence, another without insurance, one case of driving without due care, a dangerous driver, one drugs seizure...

And 2x vehicle seized (including the one that failed to stop)

Great teamwork with our 4 wheeled friend in RPU and ARVs for assisting with the pursuit.

We’ve got a lot more work to do to make the roads of Surrey safer.

We can’t be everywhere but could be anywhere.#Fatal5

And the crime fighting continued on Friday evening...

…his handheld mobile phone whilst driving.

The vehicle has been seized and won’t be reclaimed, so it will either be sold on or crushed.#Fatal5 - distracted driving. pic.twitter.com/I0kJhhgVrC

Summing up the benefit of the Brompton, Surrey Police warned road users: "We can’t be everywhere, but could be anywhere."