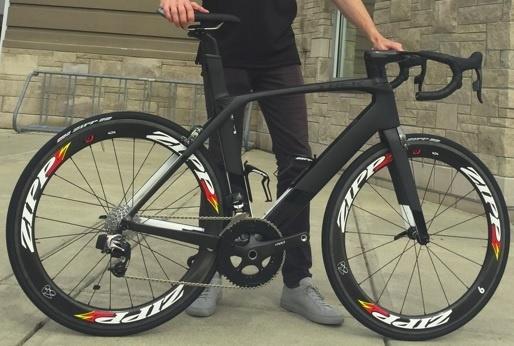 Thames Valley Police have been accused of concentrating on high-value items after a social media appeal for the bike, and many other expensive items, which were burgled from a property in Windsor last week
by Dan Alexander

A post appealed for information about a break-in at a property in Windsor between about 7.30pm and midnight on Wednesday, during which a Trek Madone was stolen.

The 2016 model had Zipp 404 wheels, customised with decals of the victim's signature and the number nine.

The offenders, three white men were travelling in a white Audi A3 with the registration plate GN64 XMM.

One reply said the post had "boiled my bacon"...

"This post has just boiled my bacon because you’ve headed it as a high-value burglary, so some resident who is very very well off for a bob or three can pull strings!

"Yet a local fella in Caversham has his electric bike stolen whilst locked up in Reading, and he can ill-afford to replace it until he’s saved up enough earnings, and Thames Valley Police weren’t interested."

We publish appeals for many crimes across our social media accounts. In this case, the investigating officer needed the help of the public, so we decided to publish the appeal on our channels.

One reply asked why the force decided to go beyond simply giving the victim a crime number for insurance purposes, as they alledge has happened after many other bike thefts.

Another commented: "Burglaries are all the same, high-value or not. Don’t prioritise rich people's burglaries over the less well-off. A stolen bike has the same 'value' to the owner. Do you do this post for all robberies?"

One other asked if the force would do a post for their stolen bicycle, a comment which received no reply.

"Love the experts on here....quick to criticise but unable to do the job themselves.... as usual."

Another, from a member of staff at a local bike shop, asked for the serial number in case it was brought to their workshop.