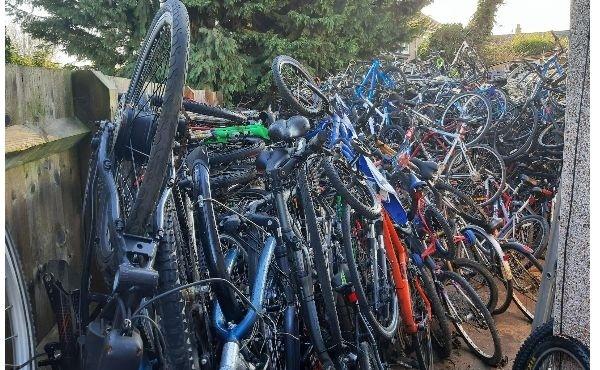 It’s the second such discovery in the Littlemore area of the city in five years, with the suspect potentially the same man in both cases
by Simon_MacMichael

Police in Oxford have arrested a man for handling stolen goods and possession of criminal property after discovering what they described as “a large number of bicycles” from an address in the city.

Thames Valley Police say that the 54-year-old suspect was arrested following the execution of a warrant under section 8 of the Police and Criminal Evidence Act 1984 at a premises on Giles Road in the Littlemore area of the city yesterday morning.

The bikes recovered are believed to have been stolen and police have begun the process of trying to find their rightful owners.

Officers have appealed for anyone with information that could be of assistance to their investigation to contact Thames Valley Police on 101, or the independent charity Crimestoppers, anonymously, on 0800 555 111.

Taking a wild guess that this might be the house, and well... pic.twitter.com/2stsolAUI1

A current listing on the website Gumtree offers for sale more than 1,000 bikes of all kinds and including men’s, women’s and children’s models as well as components and accessories, with the contact address given as a property on Giles Road, Littlemore and photos suggesting it is the same premises as the one raided by police.

The listing, posted on Tuesday, reads:

More than 1000 used bikes for men women boys girls & children of all ages comprising of among others mountain road city town hybrid specialized sport racer vintages antiques classics single & multiple gears. Different types, makes & models like Raleighs dawes professionals carreras BMXs giants, ammacos, treks, probikes & many more. Most bikes are in very good working condition and well-serviced whilst a few may need some tweeting doing here & there like washing & removing rust, attending to breaks & flat tyres. Also available is more than 700 used bike tyres and inner tubes, frames, spares baskets new and used key locks, new & used tubes rims & wheels, lights, covers, saddles, pedals, mudguards, handle bars, cogs and other used bike accessories, etc. Student discounts & export deals considered. For export, price depends on choice of bike(s) quality & quantity (large, medium and small). Delivery within Oxford for free or a fee. Please consider contacting me if you would like to give out for free, sell/ scrap/part exchange /trade in your old/used bike whatever the condition it is. Please note that Price of £15 is for the advert to go through NOT selling price of a bike but this price can be considered for export when sold in bulk. Please email/phone/ text messages for more information. Please do not waste time asking if this is still available because is always available. The question of availability will not be answered or responded to.

In 2017, we reported how Thames Valley Police recovered 164 bicycles from the back garden of a property, again in Littlemore.

> Police in Oxford stop man with two stolen bikes ... and find 164 more in his garden

Officers searched the premises after stopping a man in the area who was pushing one bike while carrying another.

A 48-year-old man was arrested on suspicion of handling stolen goods in connection with that incident and was released on bail.

There was no subsequent report of what action, if any, was taken against the suspect, whose name was not released, as is the case in the latest discovery.

However, the location, the age of the suspect in both the 2017 and the most recent case, and the sheer number of bikes involved do strongly suggest that it may be one and the same person.