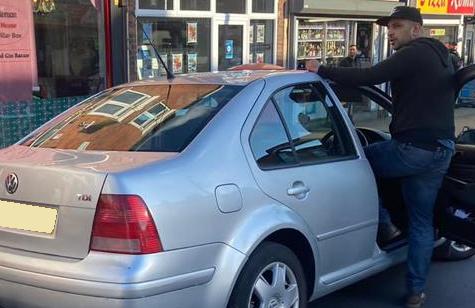 Police hunt driver who accelerated towards cyclist, knocking him from his bike, then fled scene

Rider, who had remonstrated about near miss, was left grazed and bruised after incident in Nottinghamshire last month
by Simon_MacMichael

Police in Nottinghamshire are searching for a hit and run driver who accelerated at a cyclist who had complained about a near miss, leaving the rider grazed and bruised after he was knocked from his bike.

The incident happened in Mansfield Road, Sherwood, between 6.30pm and 6.45pm on Wednesday 5 May, say Nottinghamshire Police.

Officers say that the cyclist had stopped in front of the car to remonstrate with the driver about the near miss.

The motorist then drove into him, and also got out of his car and kicked the bike before driving away from the scene.

In an appeal, police have released the above image of a man they wish to speak to with regard to the incident.

Investigating officer PC Rosanna Barton said: “We are releasing an image of a man we would like to speak to in connection to a hit-and-run in Mansfield Road, Sherwood.

“It is suspected that the vehicle was displaying false number plates as the registration number is linked to a different make and model of vehicle.

“We are keen to identify the man pictured in the image, who may have information that could help the enquiry,” she added.

“If you recognise him, or know of someone matching his clothing and description, or have information which could help, please contact us on 101 quoting incident number 641 of 5 May 2021.”