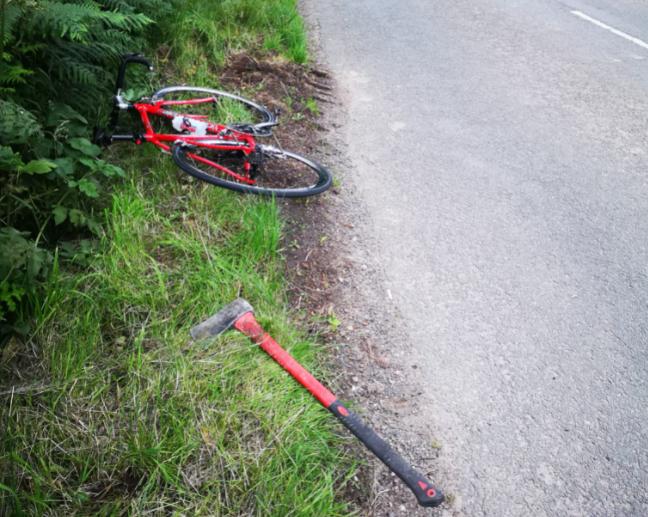 axe thrown at cyclist - via Carl Ainsworth on facebook.PNG

*Update, 4.46pm: road.cc has now received a statement from Staffordshire Police. The original article is below the statement.

Police were called at 8.56pm on Sunday 11 July to B5017 Four Lane End following reports of an axe being thrown out of a van at a cyclist.

Officers advised the cyclist – who was uninjured – to go home and that they would attend his home address.

Police visited the victim, who had taken the axe home, the following morning. The victim declined to give a formal statement to police. The axe was seized for destruction.

Officers are currently collating CCTV footage of the area at the time and ask anyone with information to contact them.

The van is described as a white, but dirty, Ford Transit.

A cyclist who had an axe thrown at him from a white van has said that police told him they won't be following up on the incident because he didn't obtain the registration plate number for the vehicle.

Carl Ainsworth says he was riding at approximately 8.50pm on Sunday evening on Belmot Road in Needwood, Staffordshire, when an axe was thrown at him from a white high roof van. Carl contacted Staffordshire Police, and says an officer told him the incident wouldn't be followed up on unless they receive further complaints about the occupants of a van matching the description. He was also told there was nothing they could do without the registration number, and that fingerprints wouldn't be taken from the weapon.

Carl told road.cc: "Unfortunately the van came at me from behind and by the time I had realised what had happened I couldn't get the number plate.

"I'm going to approach the petrol station at the roundabout at the end of the road for CCTV footage. I told them [Staffordshire Police] the garage has CCTV and the van would have to drive past to go anywhere to which they said they won't be going to try and get footage.

"They have collected the axe from me which I had to go back and collect myself and have said it will be destroyed and highly unlikely prints will be taken from it."

Carl posted a photo and news of the incident to a local Facebook group, which has already been shared hundreds of times.

"Hopefully I get a reg plate then we will see if they are interested", added Carl.

"Throwing an axe from a vehicle at a cyclist is surely attempted manslaughter, maybe they would have a different approach if it was and a mother and child.

"Either way very frustrating. Last year I had a bike stolen and had to get CCTV myself and track them down, put myself in harm's way to get my bike back as the police were not interested. And this is even worse."