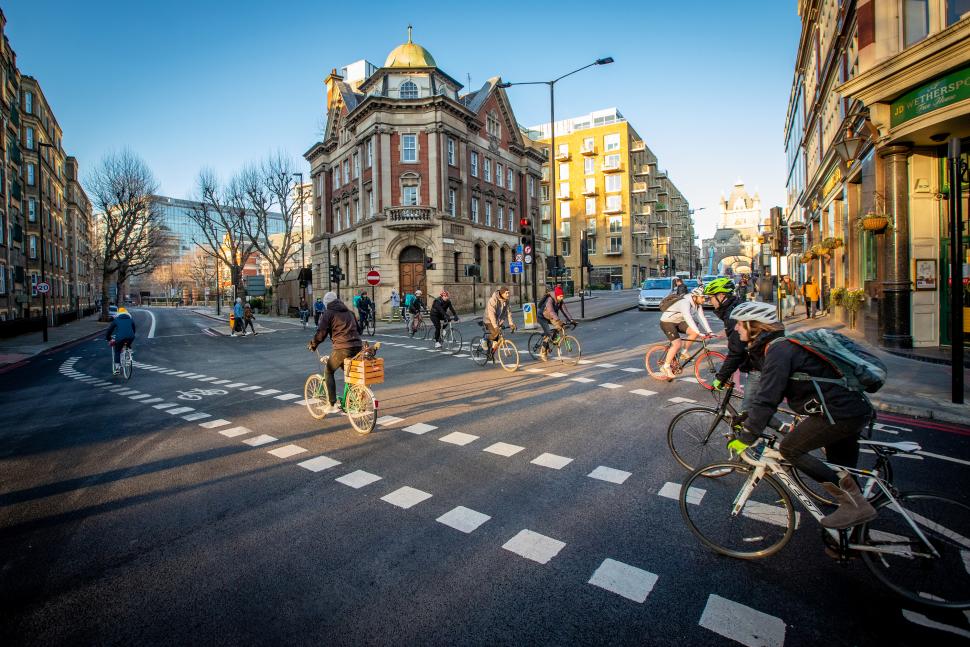 Transport for London (TfL) has announced plans to extend Cycleway 4 westwards from Tower Bridge to London Bridge, thereby connecting two key protected routes for cyclists – and, if you take a close at the picture above, their dogs – on the south side of the Thames.

Currently, two sections of Cycleway 4 are open – between Tower Bridge Road and Rotherhithe, and from Greenwich to the Angerstein Roundabout, one of the most dangerous junctions in the city for cyclists.

TfL says it will now trial changes to Tooley Street and Duke Street Hill at the London Bridge end of the route, with construction due to start early next month, and is asking people for feedback as part of its emergency response to the coronavirus pandemic, and is inviting responses to a consultation on the proposals.

Sections of light cycle segregation with wands in both directions, along Tooley Street and Duke Street Hill, as well as extended advanced stop lines for people cycling

The eastbound arm of Tooley Street will be closed near the London Bridge Hospital and will become a new pedestrian space. It will mean the large numbers of people walking who exit from London Bridge station and cross Duke Street Hill will have more room and fewer roads to cross when travelling east

Some changes for general traffic including a new left turn ban into Queen Elizabeth Street (except for local buses, taxis and cycles) which will reduce the risk of road danger and protect people cycling from the potential of being injured by vehicles turning left.

Will Norman, London’s Walking & Cycling Commissioner, said: “Recent TfL data shows that many Londoners have turned to cycling during the pandemic as a way to exercise and make essential journeys, so it is vital that they are able to do so safely.

“The trial changes being made to extend Cycleway 4 will enable more people to cycle safely and easily around London Bridge and beyond, building upon measures already taken to extend the route between Greenwich and Charlton.

“I urge people to submit their feedback now and take part in the engagement, so we can ensure these changes work for all those living, working and travelling in the area,” he added.