“We see too many athletes using this kind of practice in recent weeks,” said the Groupama-FDJ rider
by Ryan Mallon

After Rafael Nadal underlined his sporting ownership of a plot of land in the south-west of Paris by winning his fourteenth French Open title on Sunday, some of France’s leading cyclists have questioned the tennis star’s use of anaesthetic injections during the tournament.

Following his 22nd win at a Grand Slam event, a feat which pulls Nadal two clear of long-term rivals Novak Djokovic and Roger Federer in the all-time list, the 36-year-old revealed that he had required multiple injections throughout the two weeks to deal with a chronic foot injury, to the extent that the Spaniard said that his left foot was “asleep” during his emphatic victory over Casper Ruud.

When asked by former Austrian pro and Eurosport presenter Barbara Schett how many anaesthetic injections – perfectly legal in tennis – he had received during the tournament, Nadal replied: “It's better that you don't know.”

That particular exchange prompted French darling Thibaut Pinot – who himself has been dogged by a chronic back injury in recent years – to tweet: “Today’s heroes…”

Pinot’s response was questioned by French tennis player Jonathan Eysseric, knocked out in the first round of the mixed doubles at Roland Garros, who wrote that the Groupama-FDJ rider’s tweet was one of “sadness”.

“Why?” Pinot, seeking to clarify his remarks, replied this morning. “Because I have my convictions, a way of seeing sport and sports performance differently than yours maybe?

“My tweet (three words) which is causing so much reaction fell on Nadal but it could have been a golfer, horse rider, handballer, basketball player, fencer, rugby player, weightlifter, skier, footballer, surfer, cyclist, etc…

“In no case his career or his talent are called into question here. We see too many athletes using this kind of practice in recent weeks.

“I almost lost two of surely the most beautiful years of my career to take care of my back, it was difficult but I am proud of it today.

“The methods [used by Nadal] are simply prohibited in my sport, which is unfortunately so decried. Here is a little more precision on the sadness of my tweet.”

Unlike many of his contemporaries, Pinot hasn’t shied away from speaking about the long shadow of doping which still hangs over professional cycling.

Last year, when discussing a cortisone injection he received out of competition in the winter to treat his back pain, Pinot said that the use of corticosteroids in cycling, aided by the legal application of TUEs such as the ones received by Bradley Wiggins before the 2011 and 2012 Tours de France, “pisses me off”.

The 32-year-old also claimed that the peloton remains defined by an internal hierarchy of those willing and unwilling to resort to medical aid – a dichotomy famously described by French cyclists of the 1990s and 2000s as “un peloton à deux vitesses”.

“When you have an injection or you use cortisone, there are at least three weeks of effects. Some do [it] just before the races. You are out of competition, but the effect is there,” he told L’Équipe at the time.

“I'm the complete opposite of all of that, but we're still in two-speed cycling I think.

“A guy who has a TUE has no place being on a bicycle. He is not fit to compete."

In an interview with L’Équipe this week, Pinot’s compatriot Guillaume Martin – an ever-attacking presence at the front of the recent Giro d’Italia – also pointed out that Nadal’s ‘treatment’ would not be allowed under cycling’s anti-doping regulations. 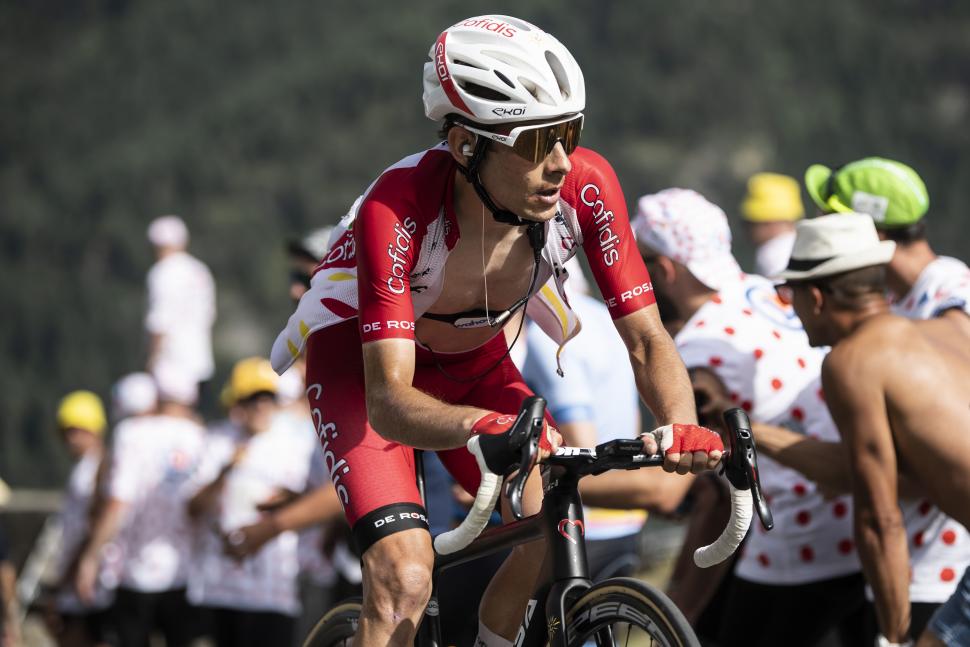 “If a cyclist does the same thing, it’s already forbidden,” Cofidis rider Martin said. “But even if it weren’t, everyone would call him doped because there is such a cultural background, such connotations attached to the bike.

“While people praise Nadal for being able to go this far in pain. I believe that [AC Milan forward] Zlatan Ibrahimovic also spoke about his knee injections.

“They pass for heroes because they go far in pain, but in fact, they use substances to go far in pain and again, it’s very borderline.

“The winner on the bike, in particular that of the Tour de France, even if there is no element behind it, he is systematically accused of doping.”

Martin continued: “Tennis, for example, has quite similar parameters with cycling, it’s an endurance sport with accelerations, so I think the same products can have a doping effect. In that case, I don’t see why there would be different regulations.

“There is a part of endurance in tennis, in football, and anyway, there have been proven cases of doping in these sports, so there was an interest.

“The MPCC [a collection of teams, including Martin and Pinot’s Cofidis and Groupama-FDJ squads, signed up to more stringent anti-doping rules] publishes statistics quite regularly and in terms of the number of positive athletes compared to the number of tests, cycling comes far behind many other sports.”

When asked if the definition of doping can stretch beyond what is currently permitted under the sport’s laws (again, another issue that has followed Team Sky and Ineos in recent years, exemplified by the squad’s apparent legalistic commitment to the ‘thin blue line’), Martin replied: “This is a great question, which I have often asked myself.

“The UCI anti-doping regulations, for me are a minimum. There are plenty of things that are allowed and that I forbid myself. It’s the whole question of grey areas, the use of certain drugs that are normally used to treat cancers, multiple sclerosis for example.

“I don’t see myself taking this kind of thing to be a better cyclist. Yet it is allowed. The anti-doping agencies are always behind the times, so I don’t think you have to wait for them to position themselves to adopt their own positions.

“It is up to everyone to build their own ethics. I accept that sometimes my results are less good because I follow this ethic, but nevertheless I remain consistent with myself and I am satisfied with that.”

“To say that the limit is between what is prohibited and authorised, that does not seem to me the right criterion,” says the thoughtful Martin, who obtained a master’s degree in Philosophy from Paris Nanterre University.

“So it’s more a question of personal ethics, say do I need to take paracetamol to do a bike race? What’s the meaning of all this? For me, it loses all meaning if we start using substances.

“The process of telling myself that I am going to take a pill to be better, that bothers me.”

This week’s sceptical response from the French cycling community isn’t the first time that Nadal’s sporting integrity has been questioned in l'Hexagone.

In 2011, five years after a blood doping ring organised by Madrid-based doctor Eufemiano Fuentes was busted by Spanish police, retired French tennis player Yannick Noah, writing in Le Monde, likened the performance of Spanish athletes such as Nadal, Alberto Contador, and the national football team, to the country having discovered some sort of ‘magic potion’ similar to that which enabled the cartoon character Asterix and his sidekick Obelix to take on the Roman army single-handedly.

A year later, a satirical puppet show on French TV’s Canal+ was criticised by Spain’s then-prime minister Mariano Rajoy after it suggested – with little in the way of subtlety – that the performances of Nadal, Contador, NBA star Pau Gasol and Real Madrid goalkeeper Iker Casillas were receiving an artificial boost.

“I'm more motivated than ever to clean up Spain's image,” Nadal said at the time. “Spanish sport is characterised by sacrifice, humility and spirit of overcoming adversity that all athletes have.

“You can't accuse someone of something you have no proof of, even if it's humorous. France is obsessed with us.”