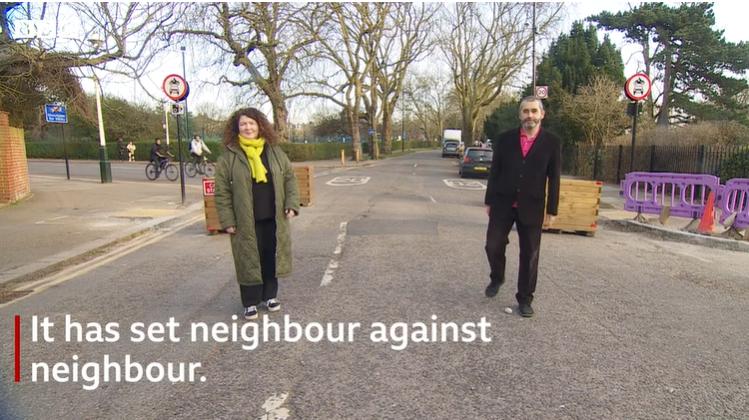 Lord Berkeley says broadcaster “embarked on its own journey to stir up a manufactured culture war”, while a councillor branded the piece "shameful"...
by Simon_MacMichael

A Labour peer who is a patron of the All Party Parliamentary Group on Cycling and Walking says that a BBC News report yesterday on low traffic neighbourhoods (LTNs) ignored evidence and “perpetuated concerning falsehoods.” Lord Berkeley also said that in the report, the broadcaster had “embarked on its own journey to stir up a manufactured culture war.”

He made the accusations in a letter sent today to David Jordan, the BBC’s Director of Editorial Policy and Standards following the broadcast of the report, which was widely condemned on social media as “one-sided", as we reported on our live blog yesterday.

Our patron Lord @tonyberkeley1 has written to the BBC's Director of Editorial Standards about a report on LTNs. The report "did not contain any data or facts relating to the efficacy of Low Traffic Neighbourhoods, as you might expect from the BBC’s Science and Environment unit." pic.twitter.com/uLWgLs7Aeu

The report included Ealing Central & Acton Labour MP Rupa Huq – whose constituency lies in the London Borough of Ealing, and who has been a vocal critic of LTNs being rolled out by the Labour controlled council –insisting that they were a more contentious issue than “air strikes on Syria, Brexit and coronavirus.”

In his letter, Lord Berkeley said: “I believe that this piece did not meet the required standards of Impartiality … within the BBC Editorial Guidelines.

“The report which was broadcast online and on TV did not contain any data or facts relating to the efficacy of Low Traffic Neighbourhoods, as you might expect from the BBC’s Science and Environment Unit. This data is readily available and comprehensive.

“Instead, it perpetuated concerning falsehoods on public safety despite evidence, for example, that introducing Low Traffic Neighbourhoods in Waltham Forest led to an overall reduction of street crime, particularly violent and sexual offences, according to a study. The research shows there was a 10 per cent fall in street crime over one year.”

LTNs, which use bollards and planters to filter out rat-running traffic through residential areas, while maintaining access for residents, the emergency services and others needing access to the area, have been around for decades.

However, the proliferation of such schemes over the past year in response to the coronavirus pandemic, particularly in London, has seen a small but vocal minority emerge that is opposed to them.

Among the arguments deployed against them is that they increase air pollution by creating more congestion on main roads, that they benefit privileged areas at the expense of poorer ones, and that they prevent the police, fire service and ambulance crews from responding to emergencies – all claims that do not stand up to close examination.

But even when councils respond to such concerns, as Ealing did by removing bollards to ensure emergency services would not be held up, instead deploying CCTV cameras, plus appropriate signage highlighting that certain roads were closed to motor vehicles, the council was accused of using LTNs as a revenue-raising scam – a “myth” that also cropped up in the BBC piece.

That led a councillor in Kendal, Cumbria, to brand the piece as “shameful,” adding in a tweet that he could “state with certainty that fines are absolutely nothing to do with raising revenue, and everything to do with disincentivising behaviour.

In the past week, opponents of LTNs have come up with another supposed argument against them, using the murder of Sarah Everard to claim that they may make the streets unsafe for women – although, from what is known of the police investigation to date, it appears that the 33 year old was abducted as she walked home along the busy South Circular Road in Clapham.

The safety of women was an issue that came up in the BBC report, and one that Lord Berkeley referred to in his letter.

“A contributor made a statement that a taxi driver could not access her property and this went unchallenged,” he wrote. “This is not the case in Low Traffic Neighbourhoods where all residential properties remain accessible, albeit via a slightly longer route.”

The peer also brought up another issue highlighted on social media yesterday by Adam Tranter, founder of the Bike Is Better campaign whose members include brands, retailers and organisations within the British cycling industry.

“The BBC Impartiality guidelines also cover conduct of staff on social media," Lord Berkely went on. "In relation to a video of a man shouting and swearing near families in a residential street, the reporter Justin Rowlatt described this as ‘brilliant’."

The reporter later claimed that he was using the word as a “euphemism," and it was “not meant as an endorsement."

But Lord Berkeley said: “As somebody who uses a bicycle as a mode of transport, it’s concerning that the BBC would take such an approving view on content featuring language and rhetoric which undoubtedly makes the journeys of vulnerable road users less safe.

“Furthermore, multiple instances of illegal behaviour – death threats, criminal damage, driving on the pavement, driving while filming with a mobile phone – were featured without question or comment. Normalising this illegal behaviour as if it is part of normal and reasoned debate is dangerous and has real-world consequences.”

Lord Berkeley continued: “I believe, as do many others, that the BBC has a responsibility to report accurately and fairly on matters relating to the environment and climate change, the biggest challenge of our lifetime.

“Rather than have a sensible discussion on how we need to adapt and use our cars less, the BBC embarked on its own journey to stir up a manufactured culture war,” he concluded.