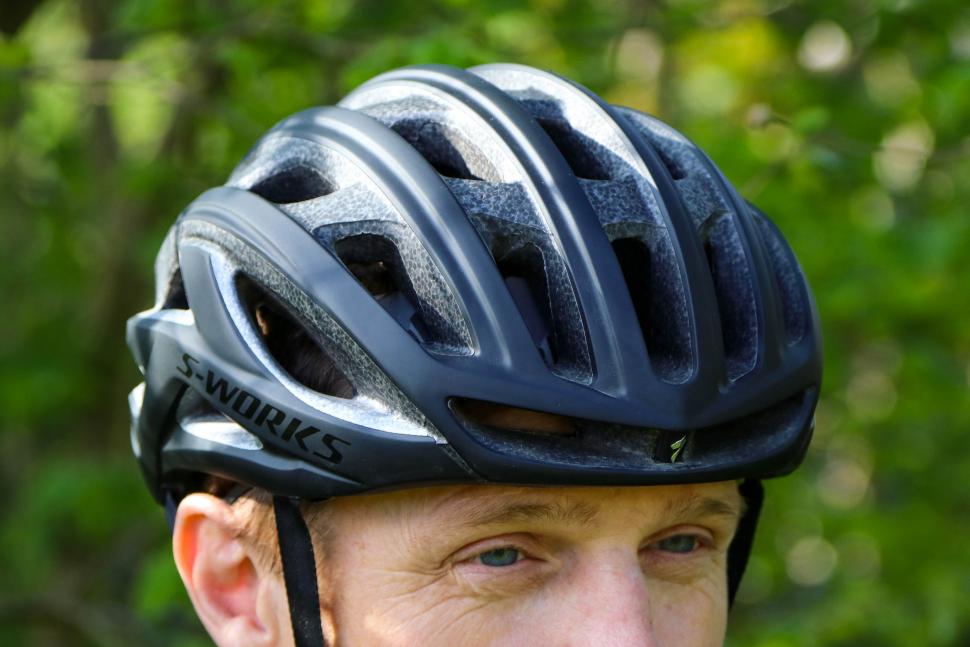 23 UK available cycle helmets were tested – the safest on test was the Hovding 3.0 airbag (…and that's not even a helmet)...
by Liam Cahill

New safety testing, funded by the Road Safety Trust and conducted by insurance company Folksam, has concluded with eight helmets receiving a ‘recommended’ mark, with only five of these readily available in the UK.

The Swedish insurance company Folksam has conducted its latest helmet safety testing with a range of 2020 road, mountain bike and urban cycle helmets. Out of the 27 helmets, or airbag helmets included in the test, only eight were given Folksam ‘recommended’ status. Of the test sample, 23 are available in the UK, with only five receiving recommended status.

The eight recommended helmets were:

Those with UK prices next to them are those that are available in the UK.

The helmets were tested for the gravitational force equivalent (g) across five test drops. The European standard (EN1078 2012) sets a maximum of 250 g when dropped from 1.5m to a horizontal surface.

The results showed that the best helmet was the Hovding 3 airbag helmet which “performed at least three times better than all the other conventional helmets (40 g vs. other helmets that were around 171 g).”

This performed best across the three oblique impact tests with the lowest risk of concussion in each test.

All you need to know about Mips 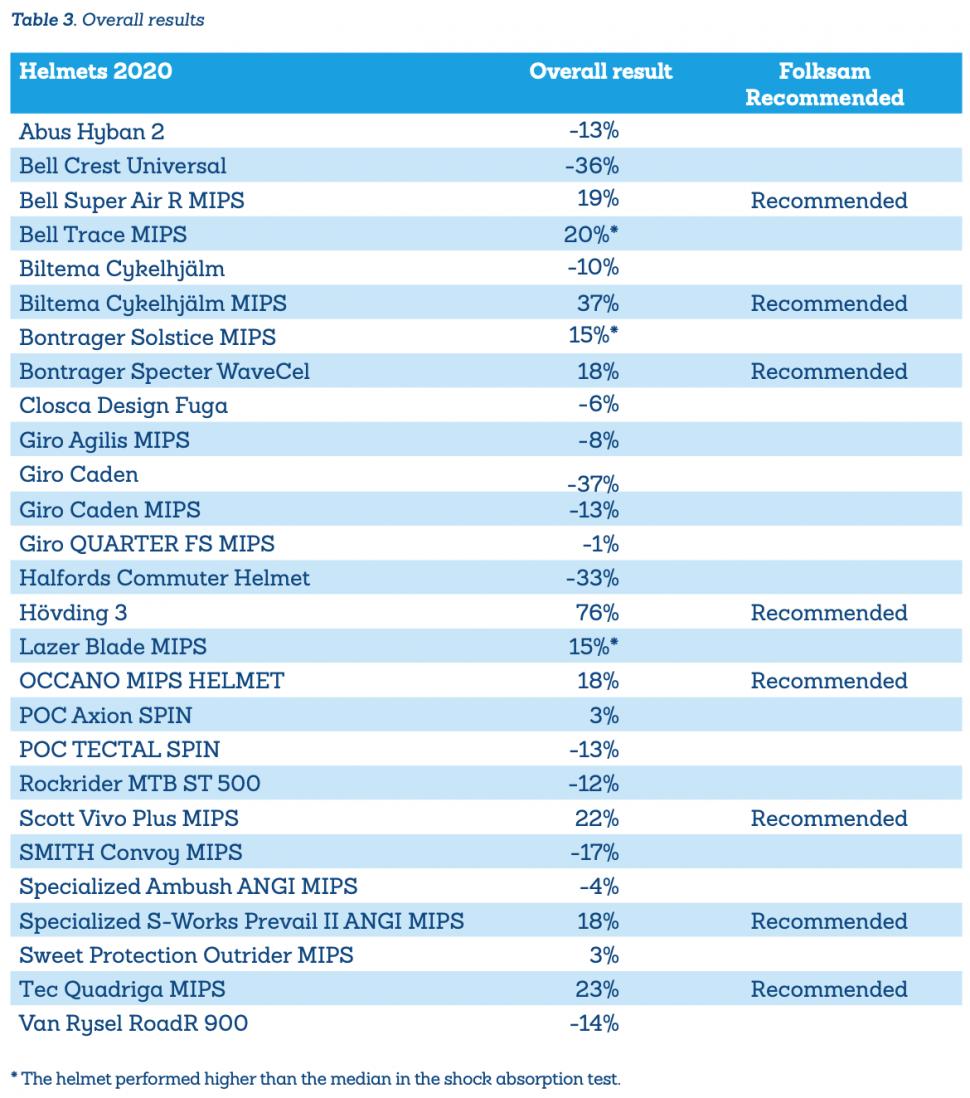 Eighteen of the conventional helmets were equipped with technologies aimed at reducing rotational acceleration (15 with MIPS – Multi-directional Impact Protection System – two with SPIN (Shearing Pad INside) and one with WaveCel).

Five physical tests were conducted, two shock absorption tests with straight perpendicular impact and three oblique impact tests. The tests were performed by Research Institutes of Sweden, which is accredited for testing and certification in accordance with the European standard. Computer simulations were subsequently carried out to evaluate the risk of concussion. “To obtain the best overall result and thereby be awarded the “recommended” label, the helmet needed to perform better than the median in both the shock absorption test and the oblique impact test.”

Setting out the reasons for this testing, Folksam said:

“Annually in Sweden over 1000 cyclists have to visit an emergency care centre due to a head injury after a bicycle crash (Stigson 2015). For Great Britain in 2018, the road casualty statistics indicate that 4205 pedal cyclists suffered a serious injury or fatality – more than 11 per day. The hospital data for England, Scotland and Wales reveal that 18,546 pedal cyclists were admitted to hospital as the result of a transport-related accident between April 2018 and March 2019. Of these, based on previous matching of the hospital and police-reported data, 78% are likely to have sustained a head injury (Talbot et al. 2014). Thus, in Great Britain, it is likely that 40 cyclists a day are admitted for head injuries. In total 70% of the head injuries occur in a single bicycle crash (Stigson 2015). Even though less than a fifth of the head injuries occur when a passenger car was involved, these crashes often result in the most severe injuries.”

Folksam goes on to suggest that “the risk of sustaining a head injury is mitigated if cyclists are using helmets.” This, claims Folksam, “has been demonstrated by epidemiological studies showing that bicycle helmets can reduce head injury risk by up to 69% (Olivier and Creighton 2016).” 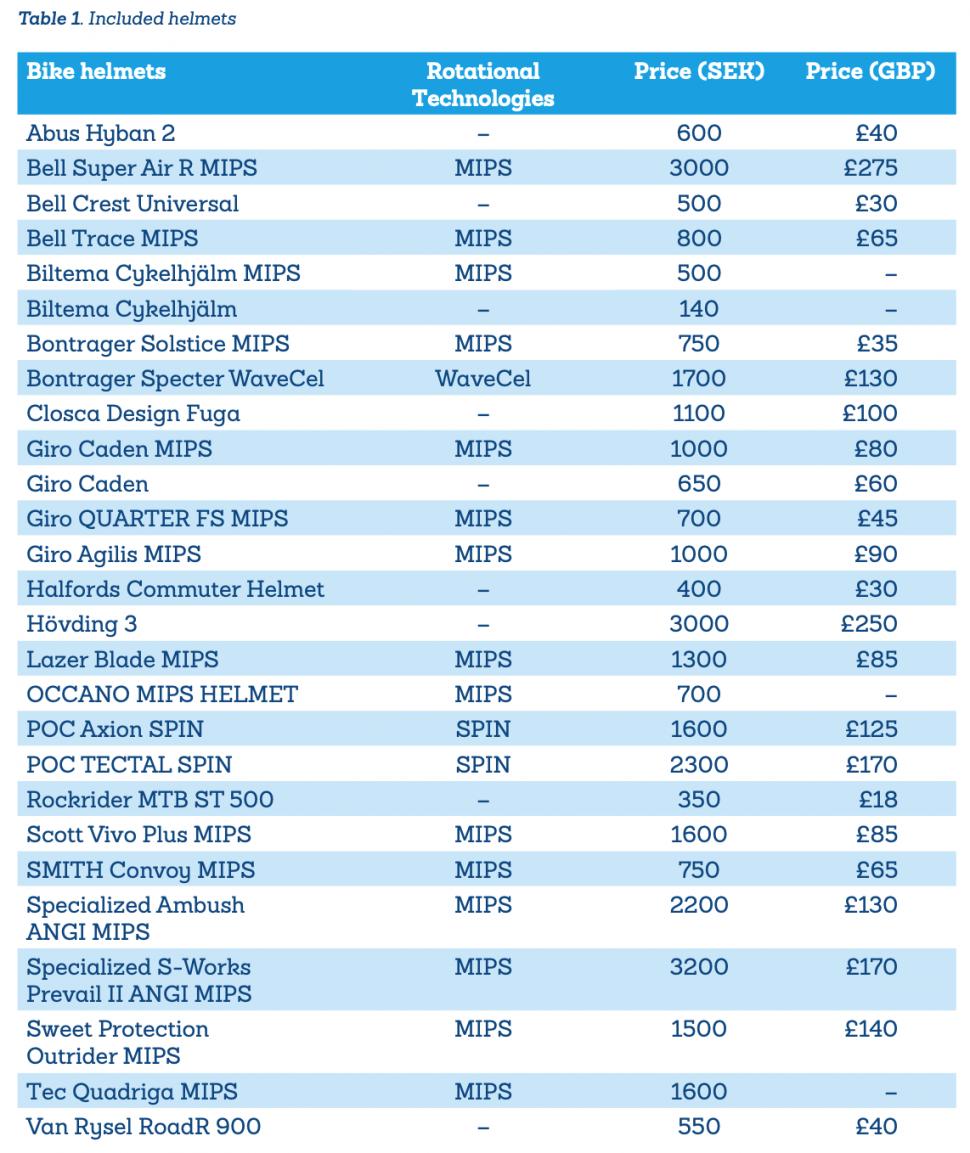 Folksam started testing helmets back in 2012 “because the certification test standards of helmets are not sufficient, as it does not cover the helmets’ capacity to reduce rotational acceleration.”

“In the current European certification tests, however, only the energy absorption in a perpendicular impact is evaluated, with the helmet being dropped straight onto a flat anvil and onto a kerbstone anvil. The pass-fail criteria used in the test standard is relatively high (250 g)”

All helmets in the recent test scored lower than 250 g.

The full paper can be viewed here

There are leading advocates of bicycle use for mass transport that suggest that compulsory helmets could be a barrier to getting people onto bikes.

Chris Boardman has been vocal on the subject, suggesting that "helmets are not even in top 10 of things that keep cycling safe."

Cycling UK is also against compulsory helmet use stating that "forcing - or strongly encouraging - people to wear helmets deters people from cycling and undermines the public health benefits of cycling."

Would an improved safety testing protocol make you more likely to don a helmet, or are you still not convinced?