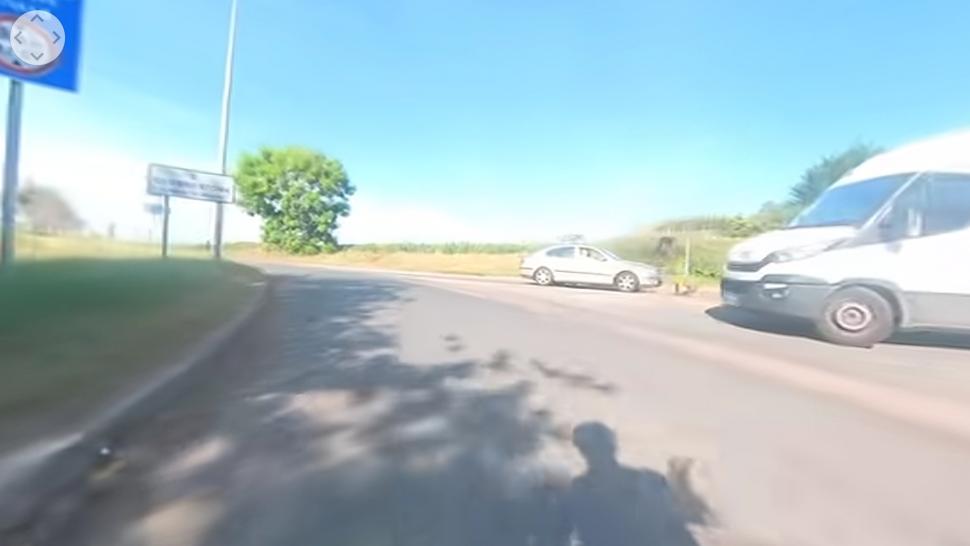 Near Miss of the Day 801 revisited: Cyclist “hugely disappointed” with police response which he says sends the wrong message

Our regular series featuring close passes from around the country — today it's Kent.....
by Dan Alexander

A cyclist who raised a complaint with Kent Police after the force decided not to proceed against a van driver who cut across him at a junction has said he is “hugely disappointed” in their response which he believes sends the wrong message to vulnerable road users.

Kent Police contacted road.cc reader Adrian after we published details of the incident, including his video, on Tuesday.

In a statement sent to road.cc, the force said: “Kent Police received a report of an incident involving a cyclist and a van near Goodnestone, Canterbury on 16 June 2022. The report was reviewed and a decision was made that it would not be proportionate for any further action.

“The force endeavours to investigate proportionately and to take action where appropriate to do so. Decisions are based on the evidence available as well as the nature and severity of the potential offence. In instances when an allegation of this nature is not pursued the informant will not be contacted.

“We apologise for any confusion which may have arisen around the response to this particular incident and officers have since spoken to the informant to resolve the issue.”

Adrian told us: “I’m hugely disappointed that Kent Police have dismissed this incident despite clear video evidence of what I consider to be at best careless driving and at worst, dangerous driving.

“The van driver has attempted to overtake me going into a junction, close passing me within inches. If that doesn't constitute an offence, I don't know what does.

“The problem is the message this sends out to vulnerable road users,” he continued.

“The police should be doing everything they can to protect cyclists and pedestrians from the minority of drivers who see someone on a bike and have to get past them, regardless of the dangers.

“We need the police to protect us all, and uphold safety for everyone on our roads, if we're going to encourage more people to travel actively.”

Below is the text of our story as published on Tuesday.

Kent Police weren't interested in this Near Miss of the Day submission, according to the rider involved — who says he's not even had an acknowledgement of the complaint.

road.cc has contacted the force to see if there's a mystery excuse, but reader Adrian hasn't heard anything back about this incident with the driver of a van one month on.

> Near Miss of the Day 800: Cyclist gets fourth close pass from same tipper truck firm

Adrian called the driving on display "appalling" and recalled the incident to us — and Kent Police in his complaint — which happened at the junction of Whitstable Road and Head Hill, near Goodnestone, at around 5.30pm on June 16.

"The van driver saw me indicate left and attempted to overtake me going into the junction," he said.

"Fortunately, I am an experienced cyclist and was able to avoid a collision, although the vehicle passed me by a matter of a few inches.

"Despite assurances that any road traffic reports would be addressed within five days, a month has now passed and I have heard nothing. I can only assume this is because Kent Police has little regard for cyclists' safety."

The rider has made a formal complaint about the way the case has been handled "or more accurately, not handled by Kent Police".

"Specifically, I would like to know on what grounds, given I have provided video evidence of the incident, did the force decide not to investigate?"