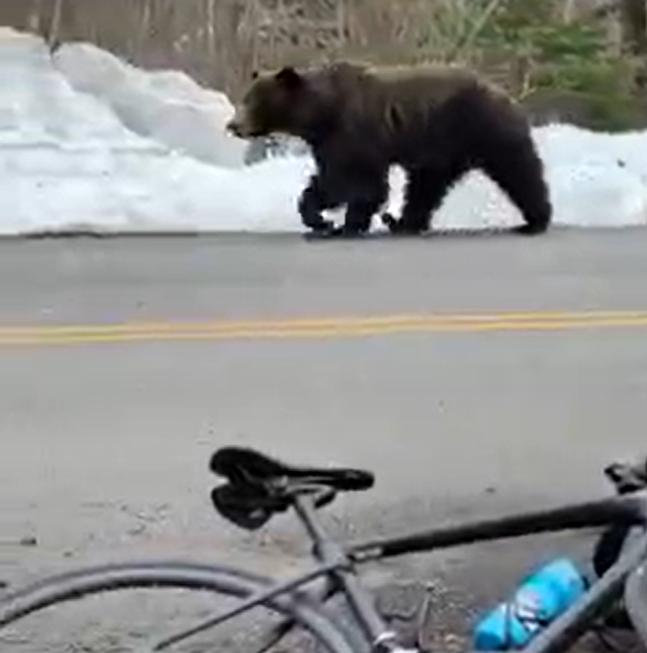 A group of cyclists in Montana were given a scare over the weekend after a grizzly bear decided to join them on their ride through the state’s Glacier National Park.

Cowboy State Daily reports that Maureen Gerber was enjoying a post-birthday cycle with her husband and two friends on the scenic Going-to-the-Sun Road, a spectacular, twisting 50-mile stretch of tarmac nestled in the Rocky Mountains close to the Canadian border.

The group had ridden 13 miles on the road to the point where it is currently closed due to snow, and were riding back down when they spotted a grizzly bear ambling in the opposite direction.

With no alternative route available to avoid the grizzly on the snow-lined, thickly wooded climb, the four riders joined 11 other cyclists, including children, who decided to pull over at an expanded hard shoulder and barricade themselves behind their bikes as the bear approached.

“So we put our bikes down and got behind them while others stood up with their bear spray and we all made noise,” Gerber told Cowboy State Daily.

“It was pretty scary. We were just sitting there. Everyone was shaking.”

Despite the tense situation, Gerber’s husband was able to film a remarkably steady video of the bear, which seemed almost oblivious to the group of terrified cyclists making noise (a recommended response when confronted with a grizzly) at the side of the road.

WOW, check out this once-in-a-lifetime grizzly encounter! A group of cyclists on Going-to-the-Sun Road spotted this bear out for a stroll yesterday.
📹: Maureen Gerber
You can Chime In your wildlife photos and videos here: https://t.co/SD32Zz7g8C (Please keep a safe distance!) pic.twitter.com/z764RIxTLX

Gerber told the newspaper that she thought the bear seemed “sleepy”, as if it had just emerged from hibernation.

The cyclist also said that she was surprised to hear from Montana natives that they had never come that close to a grizzly.

“These guys have lived out here for 60 years and they tell me they’ve never come that close,” Gerber said. “I guess because I’m originally from the East Coast, I thought this happened all the time. I guess it was a big deal.”

> Video: Drivers in Canada save cyclist from grizzly bear attack

Last year a bikepacking cyclist was killed by a grizzly bear at a campsite in Montana, around 150 miles from Gerber’s close encounter.

Leah Davis Lokan, a 65-year-old nurse from Chico, California, was dragged from her tent and mauled to death during the attack in the small town of Ovando in July. The bear was killed after a three-day search.

In 2019 a Canadian woman said that she had to put in “a once-in-a-lifetime sprint” to get away from a grizzly as it pursued her in the Yukon.