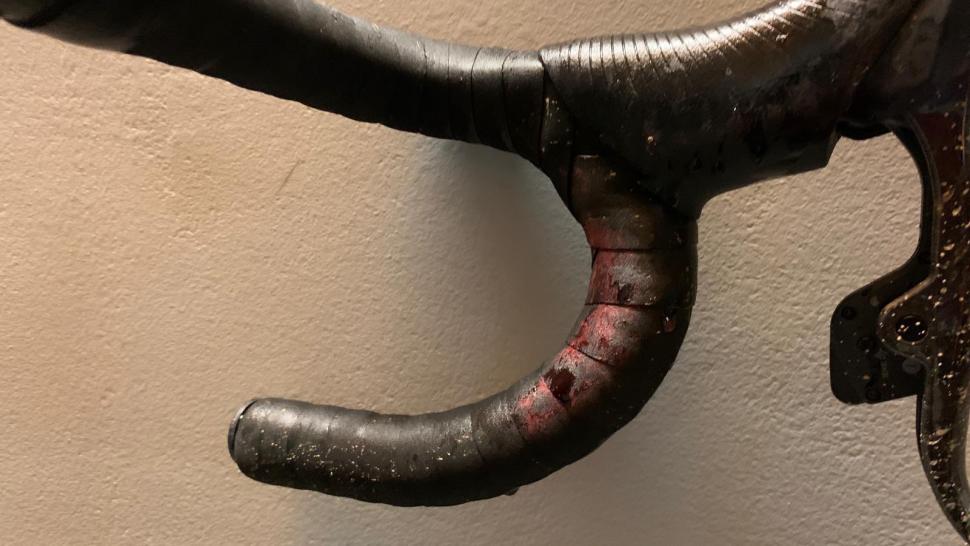 Ever wondered what racing over 17 sections of cobblestones does to your hands?
by Will Bolton

Lizzie Deignan's hands were so battered from the cobblestones during her historic victory at Paris-Roubaix Femmes her handlebars were left covered in blood.

Over yesterday's 117km course the riders went over 17 sections of pavé as the rain fell heavily.

Deignan soloed to victory attacking on the first section of cobbles with over 80km still to go.

During the race commentators Dani Rowe and Magnus Bäckstedt discussed the pros and cons of wearing gloves in the cobbled classics.

2004 Roubaix winner Bäckstedt said he preferred wearing time trial gloves as too much padding meant he found it harder to grip the handlebars properly and control the bike on the rougher sections.

He said that many riders hands' would bleed regardless of whether they were wearing gloves and ultimately it was down to personal preference.

Deignan opted not to wear any gloves and after the race Trek Segafredo released images showing her bloody handlebars and bruised hands.

Beneath the image Trek Segafredo commented, possibly only half joking, that they would 'never wash' the history making bicycle as some people called for it to be stored in a museum.

Speaking after the race, Deignan said: “I didn’t know I was going to win until I entered the velodrome.

"Because honestly, I couldn’t hear anything, my legs were cramping, and I knew that even on the last section you could lose two minutes if you cramp and blow up. I really just tried to keep a regular pace...

“We didn’t have a chance to dream for so long; it’s always been a men’s race.

"I am just so proud of this is where we are, that women’s cycling is on the world stage now. I am proud that my daughter can look at the [cobblestone trophy]. She doesn’t just have to watch men on the TV anymore."