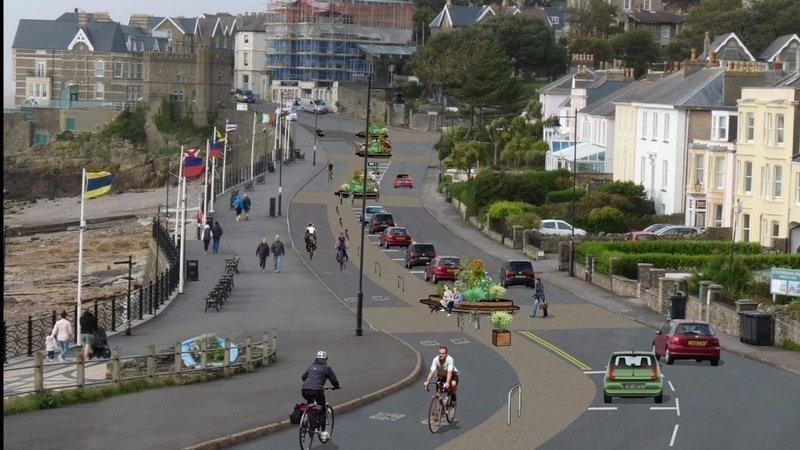 Former cabinet minister Dr Liam Fox has led a protest against a planned seafront bike lane in his North Somerset constituency that is being funded by money provided under the government’s Active Travel Fund and which has already been backed in a public consultation.

On Saturday, the former international trade secretary joined a protest against North Somerset Council’s plans for improvements to The Beach in Clevedon aimed at promoting walking and cycling, including a bidirectional cycle lane, supporting local businesses and encouraging use of local buses.

The Conservative politician, who has represented the constituency since 1992, said on Twitter that there had been a “massive turnout” at the protest – although one person replying to his tweet put the numbers attending at no more than 140 people, equivalent to around 0.6 per cent of the town’s population.

“Huge numbers”? That’s about 140 people, tops, some of whom just happened to be at the cafe. 0.6% of the population of Clevedon. You’re on the wrong side with this one.

Fox also tweeted a link to a petition calling for the proposed changes to be scrapped.

Among those responding to his tweet was 2016 Olympic gold medal-winning cyclist Callum Skinner, who suggested, tongue-in-cheek, that a dual carriageway and multi-storey car park be installed on the town’s seafront instead.

Spot on Liam, cancel the cycle lane, planters and extra pedestrian space. Please re-drect the money to upgrade the road to a dual carriage way and build a new multi-storey on the front instead 😍

North Somerset Council says that the plans, which include widening the pavement along the seafront and building parklets outside cafés, would also see additional parking at the eastern entrance of Hill Road to replace those removed due to the installation of four new pedestrian crossings as well as loading bays to service local businesses.

The speed limit on the Seafront and surrounding roads – where in September 2020 a cyclist sustained critical injuries in a collision involving a car – is to be reduced to 20mph, and it will also be made one-way.

Speaking about the plans as a consultation into the plans was launched last year, North Somerset Council executive member for planning, highways and transport, councillor James Tonkin, said: “Covid-19 has changed the way we live our lives.

"Outdoor activities have increased significantly, including walking and cycling, and we need to react accordingly.

“The suggested changes will allow visitors, residents and businesses the opportunity to continue enjoying North Somerset towns, but in a safe and secure manner.”

The council amended its plans following concerns expressed by a number of respondents to the consultation, which found 50 per cent in favour of the proposals and 42 per cent opposed.

It is not the first time that Fox has opposed North Somerset Council’s plans, using money from the Conservative government, to encourage more people to walk or cycle in the area.

Last year, Fox opposed its proposals to close country lanes in a number of locations between Clevedon, Yatton, Nailsea and Backwell to help encourage greater active travel, and cycling and walking in particular.

The council said that closing the roads “is anticipated to form the foundation of a wider ‘Rural Lanes Active Travel Enhancement Scheme’, funding for which has been obtained through the DfT Active Travel Fund (Tranche 2).”

The council, which is controlled by an alliance of independent, Liberal Democrat, Labour and Green councillors, received £473,750 under Tranche 2 of the scheme, on top of the £106.140 it had received in Tranche 1.

It said that it expected the changes to:

• prevent the use of the road by vehicular traffic of a kind which is unsuitable having regard to the existing character of the road
• facilitate the passage on the roads of pedestrians, cyclists and equestrians
• reduce the potential risk of HGV’s causing damage to the road or buildings on the road
• avoid danger to persons or other traffic using the road
• Preserve and improve the amenities of the area through which the roads run.

Writing on his website, Fox said that the scheme was “the most crackpot idea yet to come out of North Somerset’s ‘rainbow coalition’ council and should be strenuously opposed.”