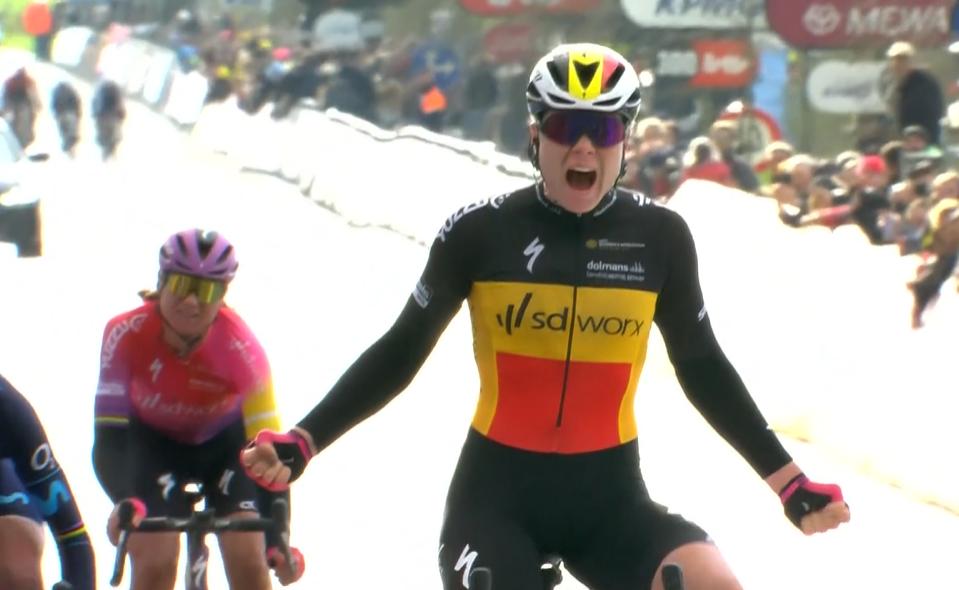 The SD Worx rider outsprints Annemiek van Vleuten to take the biggest win of her career, to the delight of the Flemish crowds
by Ryan Mallon

Lotte Kopecky became the first woman to win the Tour of Flanders in the Belgian champion’s jersey, comfortably seeing off Annemiek van Vleuten in the sprint to the delight of the home fans in Oudenaarde.

Kopecky’s win capped off a consummate team performance from SD Worx, who used their numbers to their advantage throughout the race, despite Van Vleuten’s best attempts to isolate the Belgian champion on the Kruisberg and Oude Kwaremont.

As hail fell during the final kilometres, slickening the cobbled bergs, SD Worx’s Swiss champion Marlen Reusser kept the pressure high during the final climb up the steep Paterberg, with only Van Vleuten (a winner of this race in 2011 and 2021) and the in-form Kopecky – who beat the Dutchwoman in sensational fashion at Strade Bianche last month – able to follow.

After a small respite over the top of the Paterberg, it was 2020 Ronde winner Chantal van den Broek-Blaak’s turn to attack for SD Worx, forcing Van Vleuten to respond and teeing up a three-rider sprint at the finish.

Lead out by domestique deluxe Van den Broek-Blaak, Kopecky used her superior sprinting skills to make relatively light work of the Movistar rider, sending the Belgian fans into raptures, and thousands of cups of beer into the air.

“It’s quite overwhelming,” Kopecky said at the finish. “I’m very thankful for my SD Worx teammates – this is a victory not only for me but for them too.

“Normally I know I’m faster than Annemiek, but we know after a hard race that she is fast. I was quite confident in my sprint but you’re never sure. But when she couldn’t drop me on the climbs, I knew I could trust myself going into the sprint.”