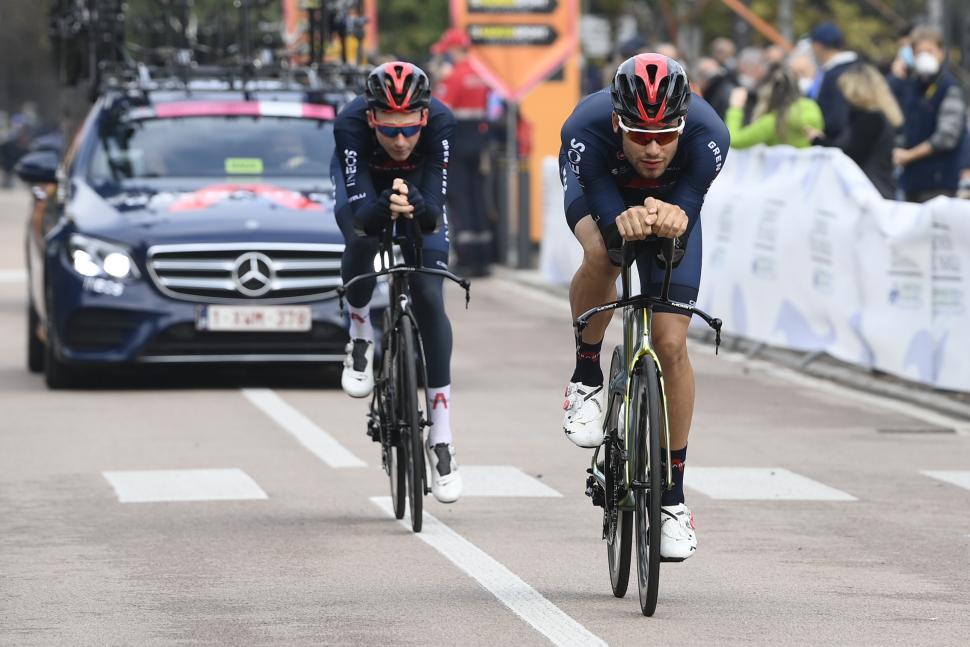 Tao Geoghegan Hart of Ineos Grenadiers has said that today is “just another Sunday” – but it’s one that could see him crowned the winner of the 103rd edition of the Giro d’Italia as he goes head to head with Team Sunweb’s Jai Hindley in today’s closing 15.7 kilometre individual time trial in Milan.

Just 86 hundredths of a second separate the pair before each rolls down the starting ramp at Cernusco Sul Naviglio this afternoon, Geoghegan Hart followed 3 minutes later by Hindley, who tookthe race lead yesterday from his team mate Wilco Kelderman.

Geoghegan Hart, who had beaten Hindley to the line in Sestriere yesterday to win his second stage of this year’s race should have the edge on paper – the Briton has posted a faster time on 7 of the 9 occasions they have ridden against the clock at the same race.

However, as Team Sky sports director Dario Cioni pointed out on Italian TV before the start of the final stage, at the end of a three-week Grand Tour, “whoever has the best legs, wins.”

Geoghegan Hart was out recceing the course this morning with team-mate Filippo Ganna – the red-hot favourite to win his third time trial, and fourth stage, of the race.

A victory by the world champion would also be the seventh for Ineos Grenadiers in the race, and if accompanied by an overall triumph by Geoghegan Hart would complete a remarkable turnaround in the team’s fortunes that would have been unthinkable when Geraint Thomas abandoned following a crash in the neutralised start of Stage 3.

Team principal Sir Dave Brailsford told host broadcaster RAI that had been “a difficult day,” but Ganna’s win on Stage 5 from Mileto to Camigliatello Silano had “set the tone” and “lifted the whole group.”

He added that Thomas’s departure from the Giro led to Ineos Grenadiers trying “to be a new team, to race with a different style” from the one we have seen over the past decade, controlling the front of the main group in a succession of Grand Tour successes.

Besides the six stage wins to date, the new approach may well bring the team the maglia rosa for only the second time, with Chris Froome winning the race in 2018.

Geoghegan Hart himself got more time than Hindley to recover yesterday evening ahead of this afternoon’s showdown – making the 240-kilometre transfer from Sestriere to Milan by helicopter rather than bus, and at dinner he thanked his team mates for their support so far and called on them to make one last effort today.

"I'm going to remember this day for a long time."

With his feet firmly on the ground and tongue equally firmly on cheek, he also said on Twitter today that “Sundays for me will always be playing football on the marshes and going to Brick Lane market with my old man and brother. Today is just another Sunday. I haven’t seen my family in 10 months, but they are always with me.”

Sunday’s for me will always be playing football on the marshes and going to Brick Lane market with my old man & brother. Today is just another Sunday. I haven’t seen my family in 10months, but they are always with me ⭕️. pic.twitter.com/XmkmY2n2up

It may be just another Sunday – but for the 25-year-old from Hackney, it’s one that could well change his life a little more than 20 minutes after he sets off from Cernusco sul Naviglio at 3.09pm GMT today.