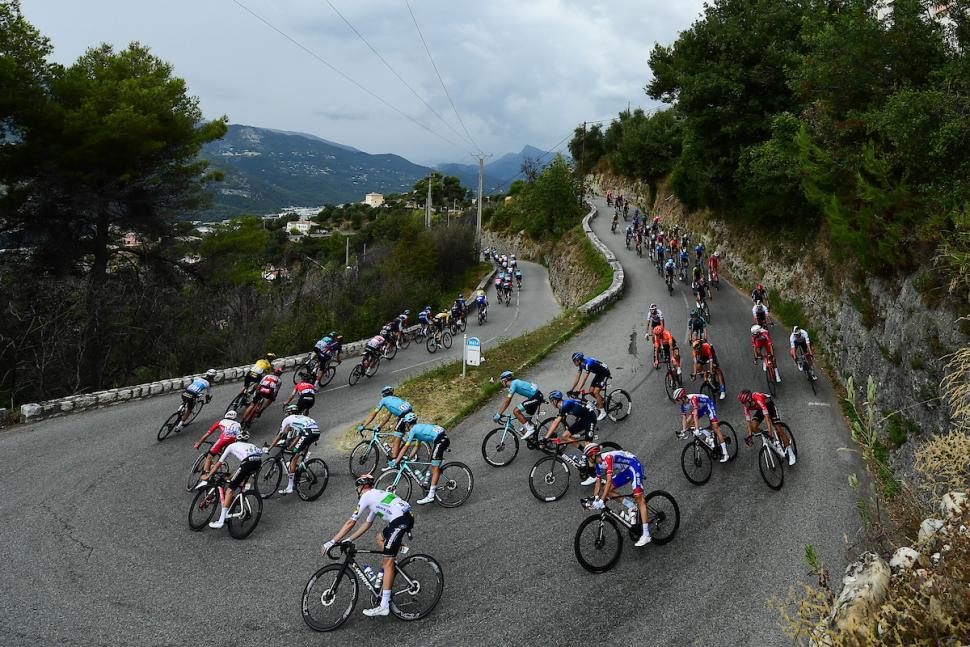 Sir Bradley Wiggins, winner of the 2012 Tour de France, has told riders taking part in this year’s race that if they are not prepared to accept the risks associated with racing, they should retire.

Speaking on Eurosport's The Breakaway show following yesterday’s crash-strewn stage on rainswept roads in and around Nice, which many members of the peloton compared to being like riding on ice, the former Team Sky rider said: “It's a tough sport and if you don't like it, I mean probably retire.”

For three riders, the stage ended their race – Bahrain-McLaren’s Rafael Valls, who sustained a fractured leg, former world champion Philippe Gilbert with a broken kneecap, and his Lotto-Soudal team-mate John Degenkolb, who was outside the time limit after earlier putting in a huge effort to bring sprinter Caleb Ewan back to the bunch after the latter crashed.

Theories flying around yesterday evening about just why the roads were so slippery included that it was due to soap bubbles ejected from a publicity vehicle in the pre-race caravan.

maybe you can? I've seen the truck before in previous Tours and the "foam" on the back is made of rigid plastic, alu etc

However it appears that the more plausible explanation is simply that following two months without rain on the Côte d’Azur, the accumulated build-up of grease, oil and even the effects of local residents washing their cars that turn the road into a skidpan when there is a downpour – although in any other year, of course, that wouldn’t coincide with the opening stage of the Tour de France.

Meanwhile, Domenico Pozzovivo of NTT Pro Cycling said on Instagram that a crash that brought him and around 20 other riders down was caused by a spectator trying to take a selfie, even though organisers ASO have specifically asked fans not to do so.

Wiggins in effect said that riders complaining about safety yesterday should put up and shut up – or leave the sport altogether.

Among those to underline concerns about safety yesterday was Dutch rider Robert Gesink, whose Jumbo-Visma team mate Tony Martin assumed the role of patron of the peloton to urge fellow riders to ease off the speed in the interests of safety.

Gesink said: “There was so much oil, if we wouldn't neutralise 20 guys would've flown over the walls.

“[The] UCI should've taken their chance to prioritise rider safety, but once again they didn't do anything. Racing isn't spectacular enough for them.”

But Wiggins said: “There will have been certain riders who wanted to race down that descent and really split the race to pieces.

“But if the union decision of the peloton is that ‘we’re going to slow down and stop’, it takes a brave man to go against that. There’s three weeks left of racing.

“If Gesink is saying that 20 riders would have gone over a wall, you never know really … A lot of riders whinge a lot in the peloton and have a good moan, but I used to be one of them when it suited me.

“It did look a narrow finish,” Wiggins continued, “but you’re finishing on the boulevard in Nice and the road is only so wide. It’s the riders that make the racing dangerous.

“Mark Cavendish has spoken about it a lot over the last few years about the lack of respect in the peloton now, no one gets given an inch, even if you’re Peter Sagan.

“Racing is becoming more competitive and riders are willing to take more risks in order to get that win. It’s a tough sport, if you don’t like it, probably retire.

“As you get older, you don’t want to crash anymore,” he added. “You want to go home to your kids not covered in scars. It’s a tough sport. Life’s tough. So it’s like ‘Robert, probably go and retire’.”

Yesterday’s stage was won by UAE Team Emirates rider Alexander Kristoff, who in his post-stage interview after taking the yellow jersey mentioned that he has four children, so perhaps despite Wiggins’ view, it’s not everyone.

And during the stage as the peloton effectively neutralised the race on safety grounds, several Twitter users paraphrased Wiggins’ own remarks after he crashed in the 2013 Giro d’Italia and remarked afterwards that he had descended “like a bit of a girl,” suggesting that the riders were descending “like Wiggins.”